Luke Schenn's return to Toronto didn't go as he would have James van Riemsdyk and the Maple Leafs well as he had hoped. But he still has a better night than Rick DiPietro and the Islanders.

The best way I can sum up the six games on Monday night: It was a bad night for goaltenders and teeth. Let's get right to all of last night's action.

1. Luke Schenn and James van Riemsdyk go head-to-head with their new teams. Who gets the upper hand?

Schenn might've assisted on the first goal of the night for the Flyers, but JVR and the Leafs got the last laugh with a 5-2 win. Honestly, considering the way these two teams are playing right now, the outcome probably would have been easy to predict no matter how these two played. The Leafs have now won four straight and the Flyers are just lost.

2. Can the Sharks get back on track?

3. Will Colorado score some goals already?

The Avs managed to get two goals in the second period, and Matt Duchene played well. But Colorado's suspect defense broke down in the third and the Avs just didn't have another goal in them. That's not even the worst part: Erik Johnson, Duchene, Jamie McGinn, Patrick Bordeleau and Milan Hejduk all left the ice at some point with injuries.

4. Rick DiPietro makes just his second start of the season. How does he perform? 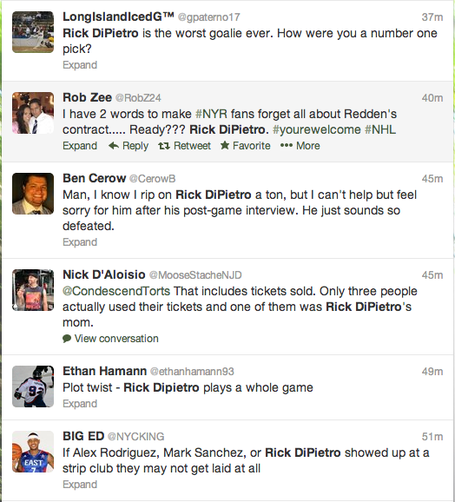 5. Jaroslav Halak returns. Can he get the Blues back to winning?

He didn't even get to play. Instead, Blues fans were treated with the latest edition of the Brian Elliott show: four goals allowed on 23 shots and the team's fourth consecutive loss.

As long as the Blues continue their losing ways, Brian Elliott's poor performances will continue to come under scrutiny. Now that Halak has re-tweaked his groin, Ken Hitchcock might be wary about rushing him back to play. That means the Blues will have to ride Elliott for the time being, which isn't comforting news.