High school goalie scores on self, flips off coach

A high school goalie in Farmington, Minn., expressed his frustration at a lack of play time by quitting in the middle of a game.

Share All sharing options for: High school goalie scores on self, flips off coach

The video description says it all:

Goalie scores on own team to tie the game them proceeds to flick off his coaches, solute then leave the ice

Well that's just disgraceful. The spelling of "solute," I mean. The goalie's outburst was pretty bad, too.

In a story FollowThePuck was discussing late into the night and Western College Hockey Blog discussed in detail, a senior goalie for the Farmington (Minn.) High School hockey team was playing on "senior night." The goalie hadn't been playing regularly for the team, having been benched in favor of a sophomore, and the senior decided to take this opportunity to make his displeasure known loud and clear. He scored a goal on himself to tie the game (which his team later lost) and then flipped off his coach and left.

Reaction from fans was mixed, with some dismissing it as a childish stunt, a few conspiracy-minded individuals calling it fake and wondering why the rink door was already open for the goalie to skate off, and a vocal contingent expressing dismay at the senior's disrespectful antics: 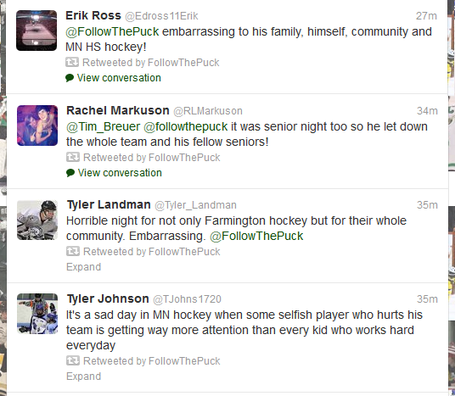