Will Chicago ever lose in regulation?

If you're a big fan of fighting in hockey, Friday night was a good night for you. If you were out and about (and really, why would you?) let's get you caught up on all of the rough-and-tumble action that you missed.

1. How will Ryan Kesler perform in his much-anticipated return?

For the most part, Kesler looked like his old self. He registered an assist on Chris Higgins' goal in the second frame and had numerous scoring chances throughout the contest. He also got under the Stars' skin, laid 4 hits and blocked three shots. If there was any rust, he wasn't showing it.

2. Can the Bruins extend their road winning streak?

Boston's winning streak came to an end on Friday, as the Sabres came away with the 4-2 victory. The only two regulation losses this season for Boston have come at the hands of the Sabres.

Broadstreet Hockey wanted to see more on both ends of the ice from his line last night:

Claude Giroux and his line had an interesting night. On the one hand: a pair of assists for G, and a great chance in the second that clanged off the post. Seemed pretty active out there offensively. On the other hand? His line, with Simmonds and Read (who both scored very nice-looking goals) was on the ice for three goals against. Giroux in particular looked out of place on the first one, and a bad clear from Read led right to the game-winning assist. Here's to more offense AND more defense from them in the future, because we know they can provide both.

4. Will new Jet Eric Tangradi stick it to his former team?

Tangradi didn't make a mark on the scoresheet at all and didn't factor in hardly at all other than a few hits in the second period. So, no.

5. Which Sharks team will show up against Chicago?

The bad one. San Jose ran into the buzz saw that is the Chicago Blackhawks and lost 4-1. The Sharks were on their heels all game long and simply couldn't keep up with the red-hot Blackhawks.

The Dallas Stars' season rests in the balance as they await news about the severity of Kari Lehtonen's injury. 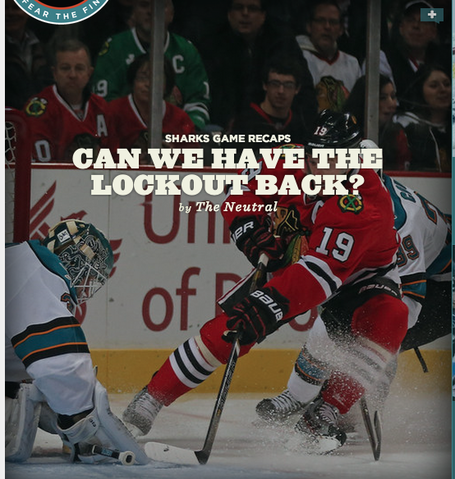