Talk about a mass of humanity.

Share All sharing options for: Flyers vs. Penguins: Grossmann scores after wild scrum in Pittsburgh net

I think we've all come to expect craziness when the Flyers and Penguins battle each other, but the Flyers' first goal in the first period might've been one of the wackier goals in recent memory.

The Flyers managed to get the puck on net while they were cycling in the Pittsburgh zone, and chaos ensued. Body after body piled up in the goal crease as the Penguins desperately tried to protect the net. Kris Letang scrambled to keep the puck from sliding past the goal line, passed it back out with his hand and then who knows what the heck happened to it after that.

The play seemed to last forever. Sticks were poking at everything that moved, Penguins were dropping to their knees to block shots and it's amazing they didn't start playing Yakety Sax in Consol Energy Center.

All five Penguins were in the crease except, inexplicably, for goalie Tomas Vokoun: 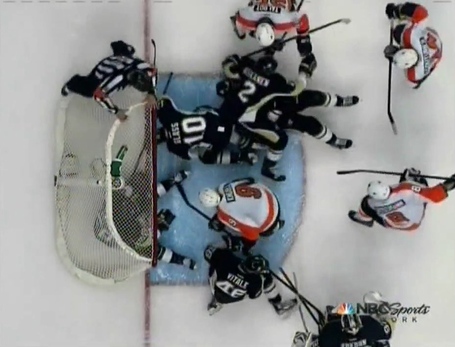 Here it is in gif form. Watch how Vokoun, feeling unproductive, decides to help out his teammates by bellyflopping.

Finally, Nicklas Grossmann finally deposited the puck into the net.

Oh, and the Flyers scored again later, and Wayne Simmonds fought Tanner Glass. A pretty typical first period for the Flyers and Penguins.