Three major injuries occurred Thursday night in the NHL, with incidents including a Vezina contender spraining his ankle and a young star facing a possible suspension.

Share All sharing options for: NHL scores: Injury night in the NHL

Some nights, reporting on the action in the NHL can feel like you're running the front desk in an ER. Thursday night was one of those nights.

Players were down on the ice left and right, and one guy suffered a scary head injury on a routine icing play. There were some exciting goals too, but overall injuries and questionable hits were a disappointingly big factor in Thursday night's games.

No. Vinny was held scoreless in the Lightning's 4-2 loss to the Bruins.

2. Will Matt Read continue his domination of the Florida Panthers?

No, but he didn't have a chance. Prior to the game it was announced that Read will miss six weeks with muscle tears. Without him, the Flyers couldn't handle the Panthers at all, and lost, 5-2.

3. Will there be any carryover from the New York Rangers playoff series with the Ottawa Senators?

Not really. Chris Neil had a 2-minute board penalty, but overall the game was a tame affair.

Maybe. Howard gave up three goals on twenty-four shots to the Columbus Blue Jackets. None of the Red Wings played very well though, so it's hard to blame Howard's vision for the loss.

5. How will the first game in the post-Lindy Ruff era go in Buffalo?

Nothing looked all that different for the Sabres, who lost, 3-1, to the Maple Leafs. It may take more than a coaching change to fix this team.

It's impossible to pick just one from Thursday night's action.

First, the injury to Vezina frontrunner Craig Anderson was just the latest blow to the Ottawa Senators, and inspired this depressing image from Silver Seven: 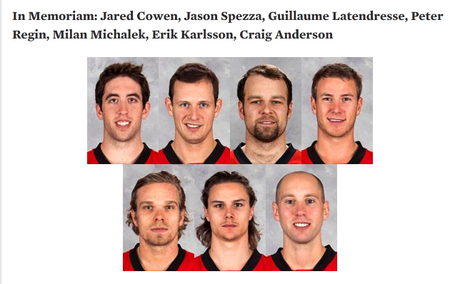 Second, the Taylor Hall knee-on-knee hit on Cal Clutterbuck might earn the high-scoring young forward a suspension, which would spell trouble for the Oilers.

• Thursday was injury night in hockey

• All the scores from Thursday