It hasn't been a great season for Sabres fans. Ever since Terry Pegula bought the team and said the Sabres' "reason for existence" would be to win the Stanley Cup, Buffalo fans have had some high expectations and reasonable hope that their favorite team would rediscover the winning spirit it once had.

Since then the team has completely regressed and long-time coach Lindy Ruff was fired earlier this week. You can't really blame Sabres fans for letting their hope completely crater. 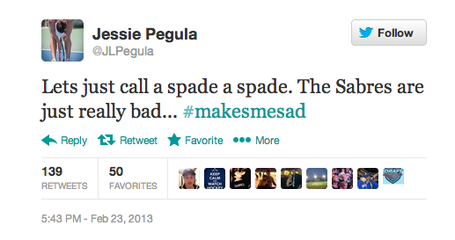 Yes, that's Terry Pegula's daughter admitting defeat tonight as the Sabres were losing to the New York Islanders. She later deleted the tweet and tried to sound "positive".

Yes, you're quite right. Buffalo fans will feel much better knowing that rebuilding their favorite team is as daunting a task as building one of the largest cities in the world with BC technology.

• Are these the Winter Classic jerseys?