Throughout the lockout there were quiet grumblings that among many of the discussed proposals to the new CBA, conference realignment was not one of them.

Apparently realignment talks are back on the table, and Elliotte Friedman reports that the NHL and the NHLPA have been working on a scenario with four different conferences. 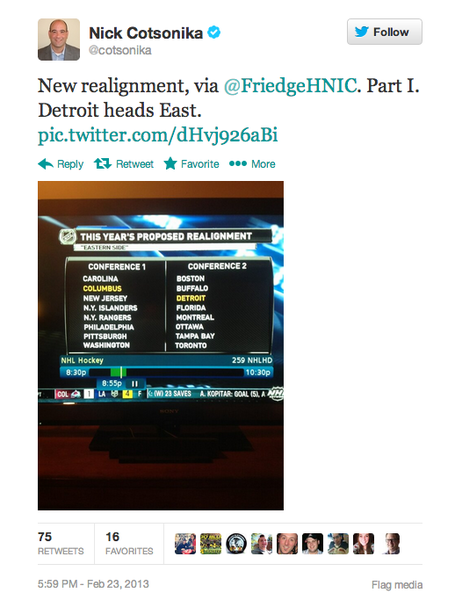 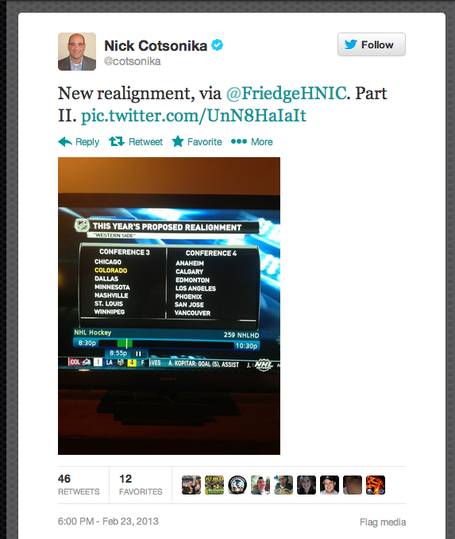 At first glance this seems to be a winner, especially for the western teams. Travel for the teams in the last two conferences will be much easier and the first two conferences retain most of the divisional and regional rivalries that exist currently. The uneven numbers (two seven team divisions, two eight team divisions) could make things complicated, however.

As for playoffs, Friedman reports that the two sides are discussing a sort of wild card for the two 8-team divisions. As James Mirtle points out, it's unclear how that sort of system would work.

Not sure how you can have one conference with 16 teams and the other with 14 if eight make playoffs in both.

We'll have much more on this proposed realignment soon. Meanwhile, here's some instant reaction from around Twitter:

The rivalry with Detroit was fun but I'll take free points against the Thrashers every day of the week.

Hmm, not a fan of seeing the Red Wings broken up with Chicago.

• Are these the Winter Classic jerseys?