Seattle hockey arena has green seats for fans, no seats for players

Share All sharing options for: Seattle hockey arena has green seats for fans, no seats for players

Prospective Seattle sports owner Chris Hansen is building an arena in the Emerald City, and he wants to bring both the NBA and the NHL to said arena. They have a website and pictures and everything. It's pretty exciting stuff. Hansen shared some drawings Thursday of what the arena would look like with an ice sheet, and it makes me want to drool.

As with most NBA/NHL buildings we have designed the seats behind the backboard/goal to retract backwards and the first few rows of courtside seating can be removed to accommodate hockey's larger playing surface and dasher board. The net result puts hockey fans even closer to the action, including our pocket suites. Given the size of the playing surface and speed of the game, we also think the Sonic Rings will prove to be one of the most unique and valued viewing experiences in the game.

Those "Sonic Rings" are really awesome. Basically, they've taken the upper level on either end and have turned it into balconies. Apparently all standing room. You can see what they look like from the on-court level during a basketball game in this rendering. Imagine that standing over an opposing goalie. Has an NCAA feel. 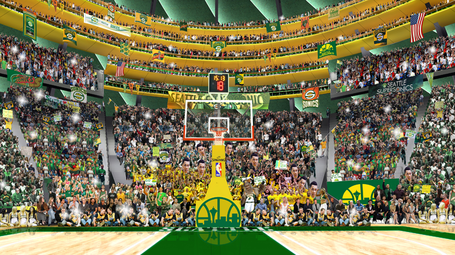 The steepness of the entire seating bowl is the best feature. Not only would that lead to amazing sightlines, it would make the place extremely loud. It's only a rendering, but even looking at the view of an empty hockey arena, I can imagine this being one of the best in-arena experiences in the NHL, assuming those "pocket suites" along the ice level aren't overpriced to hell.

That said, let's take one more peek. Maybe they should've consulted with a hockey person before putting these together? Zamboni doors, benches, blue lines, locker room tunnels ... ah, hell, minor details. The place is expected to seat around 17,500 for hockey.