The Sharks coach could pick up Joe Pavelski by the head. Allegedly.

Share All sharing options for: Sharks vs. Ducks: Larry Robinson has huge hands

At first glance, I was ready to make fun of the Sharks announcers for making a big deal out of something very trivial or minute during a game.

But trivial and minute do not describe Larry Robinson's hands at all.

A simple pat on the head of Joe Pavelski (actually, it looked more like an awkward clutch, more than anything) only highlighted the fact that Sharks assistant coach Larry Robinson's hands are huge. Or Joe Pavelski's head is just really small. Either way, one can only assume that Robinson's form of discipline for his players is to pick them up by the cranium and shake them violently.

To judge the exact size of Robinson's hands, we now go to our NHL size analyst Ilya Bryzgalov. 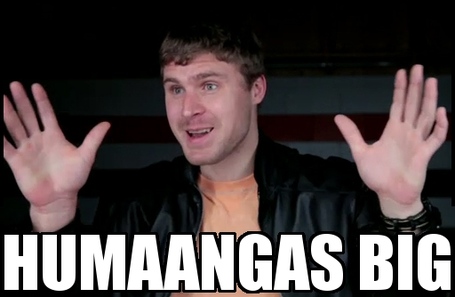 • Oilers should use offer sheets