Share All sharing options for: Marc Staal hit in face by puck

In the middle of the third period of the game between the New York Rangers and the Philadelphia Flyers, a deflected puck nearly hit Marc Staal directly in the eye. Here is the incident, presented in a pair of brutal animated GIFs:

And here is a horrifying picture from Liam McHugh: 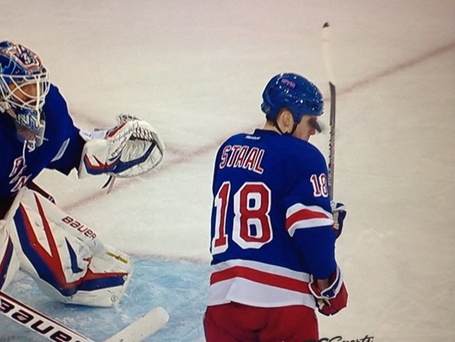 It happened after a shot from Flyers defenseman Kimmo Timonen deflected off of Jakub Voracek's stick and hit Staal just inches above his right eye, drawing blood and sending him down to the ice in a great deal of pain. He eventually skated off the ice covering his face.

Staal is a major contributor for the New York Rangers, and entered the night fourth on the team in points with 11.

This is the kind of incident that happens every so often and starts to make people talk about the issue of mandating visors in the NHL. It's clear that a visor would have helped in this situation, and it's only dumb luck that prevented this puck from hitting Staal directly in the eye and doing serious damage. Will this incident be the same as those that have come before, such as the one that convinced Chris Pronger to wear a visor, where in the end the league does nothing in response? Or could this finally be the event which gets the ball rolling for mandatory visors?

Regardless of the ultimate effect on the league, it's a safe bet that Staal will give serious thought to wearing a visor in the future after this close call.

The Rangers did not have an update on Staal's condition when asked by reporters after the game.

• ESPN has a "SportsCenter" problem, not a hockey problem

• All the NHL realignment news