Admit it. You laughed.

Times are dark for the Dallas Stars. After an embarrassing loss on Sunday, coach Glen Gulutzan called his team out for their lack of effort with some colorful language, saying his team had to come out to play hard against Anaheim on Monday if "we've got any balls."

Well, they didn't. Anaheim shut them out to the tune of a 4-0 loss that had fans booing the team and heading for the exits early. 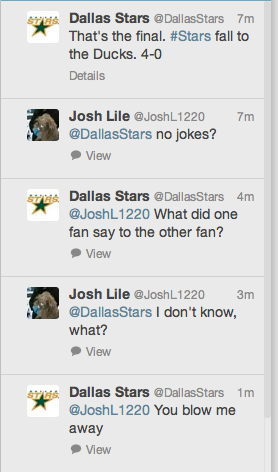 Hey, I laughed. I had to read it three times before I got it, but I appreciate lame jokes.

The Stars also pranked their fans during the game. The Stars are getting new jerseys next year, and they told fans before the game that they'd offer a preview of the jerseys during an intermission. And then this happened.

• Kindl’s sweet backhand … on his own goal