Quinnipiac and Yale will do battle in the first all-ECAC national final since Boston University and Boston College went head-to-head in the 1978 championship game.

PITTSBURGH -- The Quinnipiac Bobcats and Yale Bulldogs will play for a national championship on Saturday night at Consol Energy Center as they close out the 2013 Frozen Four. How did each team get to this point?

The Bobcats have been the top-ranked team in the nation for much of the second half of the year, riding a 21-game unbeaten streak to the national spotlight. The Bulldogs turned on their game just in time for the playoffs, shocking Minnesota, North Dakota and UMass-Lowell on their way to a West Regional title and a berth in the national title game.

Quinnipiac came from behind to defeat Canisius in the East Regional Semifinal, then rolled past ECAC rival Union College and St. Cloud State in the regional final and the Frozen Four semi, respectively. 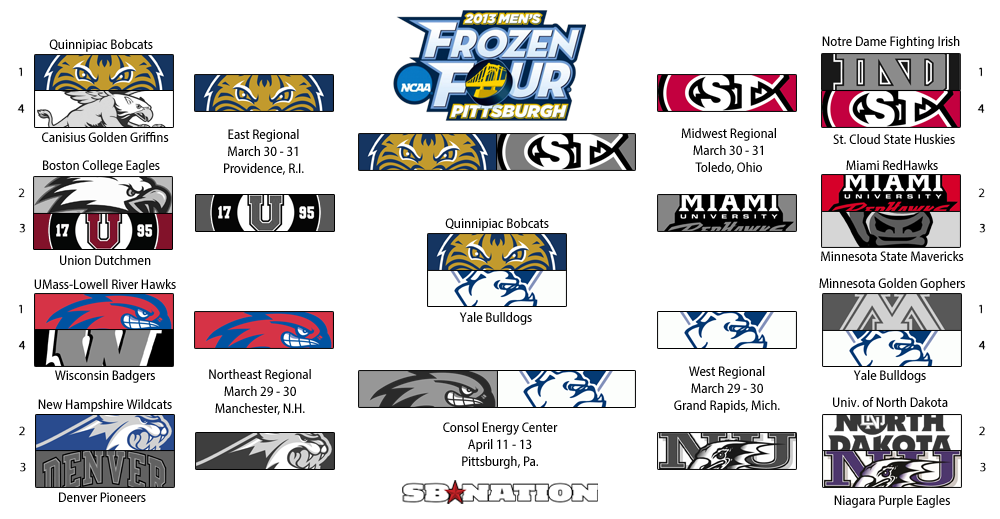 The two teams have played three times this season, most recently in the ECAC Hockey consolation game in Atlantic City on March 23. Quinnipiac won all three games, but that doesn't matter much as the familiar teams meet one another for a fourth time with a national championship on the line.

Stick with SB Nation for full coverage of the 2013 Frozen Four.