Frozen Four 2013: Why beating Yale means so much to Quinnipiac

Winning a national championship is clearly a big deal for any school, but if the Quinnipiac Bobcats beat the Yale Bulldogs on Saturday night, it'll mean just a bit more.

Share All sharing options for: Frozen Four 2013: Why beating Yale means so much to Quinnipiac

When you're a freshman at Quinnipiac University, you're forced to take a seminar called "QU 101" during your first semester. I found it to be a tiring exercise where we sat around and talked about our "identity" and "community" and "individuality" and other things college freshmen really couldn't care less about, but our otherwise-useless brick of a textbook was good for one thing: It introduced us to a 2003 op-ed written by Jeremy Kutner of the Yale Daily News.

I don't have chlamydia. And since I have no desire to acquire it, it would seem strange, at least according to conventional wisdom, for me to have any interest in Quinnipiac University.

Quinnipiac, a private university located about 15 minutes from Yale in Hamden, is for many synonymous with skank. The thought is that Quinnipiac is a world where beer flows like water and shortages of condoms due to overwhelming demand are far more common than a run on microeconomics textbooks at the school bookstore.

For those of you who don't know, the worlds of the Ivy League and the Tube Top League coexist at the spiritual center of the party scene, Toad's, New Haven's only legitimate claim to Cancun-style social relevance. Every Saturday night, busloads of eternal Quinnipiac spring breakers are disgorged from minibuses from which they stagger, bathed in glitter and clad in high heels and little else, to Toad's.

For QU students, this is our introduction to the rivalry with Yale University, our neighbors just seven miles south on Whitney Avenue.

There's never been any doubt and there will never be any doubt that Yale is a superior academic institution to Quinnipiac -- and, well, basically every other school on the planet. It's Yale. It's the Ivy League. The school is 75 years older than the country in which it resides. They're kind of a big deal.

Quinnipiac, meanwhile, was basically just a tiny commuter college until about 20 years ago, and it didn't switch its name from Quinnipiac College to Quinnipiac University until the year 2000. The growth the school has seen since head hockey coach Rand Pecknold signed on 18 years ago is still impressive, and it's largely driven by an even faster-growing athletics program. 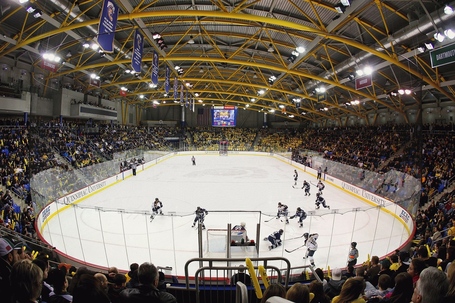 In 2007 the University opened a brand new, state-of-the-art sports complex, the TD Bank Sports Center, which cost $52 million to build and holds two separate ~3,500-seat venues for ice hockey and basketball. Before that, the basketball teams played in an old high-school style gym that's now used for intramural sports, and the ice hockey teams played at Northford Ice Pavilion, a non-descript rink you could find in any typical New England town. In hockey, they've made the jump from Division II to Division I, and from MAAC to Atlantic Hockey to ECAC Hockey at the DI level, all since 1998.

"We had my first year roughly 2,000 applications, and this year we should break 20,000," Pecknold said. "The driving force 15 years ago when we went to Division I athletics, wanted to bring in [athletic director] Jack McDonald and make the transition, for us, was to become a better academic school. I remember that when it happened.

"People say, 'How does that drive academics?' It does. It's the Doug Flutie rule. He throws that pass, and Boston College's applications go through the roof the next few years. You can be more selective from an admissions standpoint. Athletics has driven our school, and certainly this run that we're on now is going to help our university and helps our alumni base and development and so many things come into play. We're proud of our accomplishments, but I give [university president] John Lahey and Jack McDonald the credit that this could happen for us."

Quinnipiac will never compete with Yale in academics, but they've made a conscious decision to use athletics as a tool to improve the quality of their academic offerings and their overall reputation. And as a result, they can certainly compete with Yale on the ice.

The infamous YDN op-ed from Kutner isn't the only bit of mud that's been slung in Quinnipiac's direction from Yale student media, and it's clear that some of the same stereotypes still exist ten years later. 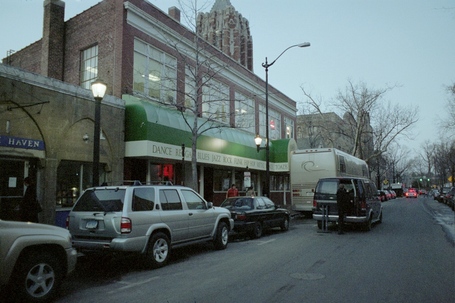 Toad's Place in New Haven, the front lines of the QU-Yale rivalry. (Wikipedia)

A 2011 YDN op-ed by Alex Fisher called for the closing of Toad's Place, the center of the New Haven party scene, and went out of its way to largely blame Quinnipiac students for the mayhem that surrounds the legendary nightclub each weekend. He suggested Yale send "a garbage truck filled with trash, vomit and urine and deposit it outside a Quinnipiac dormitory" as payback for "stripping normally benign Yale students of their own decency" by attending a nightclub and getting over-the-top college-drunk on weekends.

As you'd expect, that prompted a response from the Quinnipiac Chronicle, which wrote that Fisher should "remove himself from the Ivy League tower he sits high and mighty on" and that his "close-minded arguments only perpetuate coarse stereotypes."

From our first night at Toad's, we learn that the spiky-haired bros and scantily clad babes invading our nightclub are students from "QPac." ...

"QPac," our abbreviation of choice for the school, is unique to Yale. While the term is not inherently derogatory, our disparaging remarks have given it negative connotations. ...

Make no doubt about it: The stereotypes exist on the Quinnipiac side too. It might not appear in writing nearly as often as it does on the Yale side, but QU students definitely hold the belief that Yalies are all stuck up, elitist nerds who don't know how to have any fun.

But the thing about Yale that most gets under the skin of Quinnipiac students -- the one part they likely won't tell you about -- is the blatant one-sidedness of the rivalry. It's that unless a Quinnipiac kid is peeing on a wall in New Haven, Yale kids just don't care about QU. They've been around since 1701, and they've had Harvard to hate for their entire existence.

Quinnipiac just doesn't matter to Yale in any sense, and when you go to a school that's put so much focus on athletics, ice hockey and in particular, beating Yale University at ice hockey, that's hard to take.

* Frozen Four by the numbers

For the Bobcats, Yale has been the measuring stick in hockey since they first jumped to Division I 15 years ago. They didn't even play a game against one another, as the New Haven Register notes, until 2006 when QU moved from Atlantic Hockey to the ECAC:

"We were new to the ECAC and, in our eyes, Yale was the measuring stick for us," said [Reid] Cashman, a former Quinnipiac All-American now serving as an assistant coach for the Bobcats. "There was a lot of excitement in our locker room."

That first Yale-Quinnipiac game, played at Yale in January 2006, came during the Bobcats' inaugural season in the ECAC. Anticipation had been mounting for the better part of a decade, originating with Quinnipiac's elevation to Division I status in 1998 and slowly escalating until the schools, practically next-door neighbors, finally laced up the skates and danced.

The rivalry has come a long way since Year 1. Quinnipiac, despite having already beaten ECAC opponents, viewed Yale as its true arrival - new kids against the established veterans, all to unfold in front of an entire city.

The Yale home game remains the biggest sports event on the calendar for QU students. Even during lean years for the hockey team, it's the one game everybody gets amped up for. There are "BEAT YALE" shirts and a standing-room only crowd at the arena atop York Hill. A lot of this is by design; it's logical for a university that's trying to sell itself through athletics to promote the hell out of a bitter rivalry with a conference foe that's already shown disdain for them in the past.

But that doesn't mean that it's a manufactured rivalry or that there's no natural hatred there. It's grown into just that over the last seven hockey seasons.

Bobcats players and Coach Pecknold are fast to term the matchup a rivalry, and the intensity of every meeting -- and perhaps more importantly, the growing attendance numbers each year for games between the schools at both QU's TD Bank Sports Center and Ingalls Rink on Yale's campus -- will clearly tell you this is a bitterly fierce rivalry.

But the feeling doesn't seem to extend to Keith Allain and his Yale Bulldogs.

If you ask people if a rivalry has formed between Quinnipiac and Yale over the last few seasons, your answer might depend on which side you asked.

"I think you're crazy to not think there's a rivalry," Pecknold said. "It is. Both the first game at Yale and this game were fantastic hockey games. I think both teams get fired up for it and it's what kids come to college for, they want to play in this environment."

"For us, it's just two points in the standings," he said.

That's continued this week at the 2013 Frozen Four, where the clear storyline heading into the week was the chance that two ECAC schools that sit seven miles apart could potentially meet in the national title game. Now that the matchup has become a reality, neither side is focusing much on the "backyard brawl" nature of the festivities.

"I think we've established a routine from Day 1," said Yale goalie Jeff Malcolm when asked if the rivalry aspect makes preparation any different, "so we're just going to stick to our routine and go from there."

"We got asked that question going into this week, what if it happened that you and Yale were in the championship?" said QU junior defenseman Zack Currie. "And our answer is the same each time. We don't care who it is as long as we're in that game. So that stays true. We want to win that national championship, and it didn't matter who was in it." 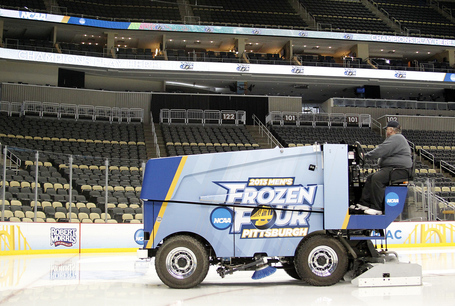 Even if they won't say it, the Bobcats know how big it is that they'll be going up against guys in Yale sweaters on Saturday evening. Yes, winning a national championship is a big deal regardless of who you beat to get there, and it's no less of a testament to the vision of MacDonald, the AD, and Lahey, the school president, if they beat Yale for that title or if they were to beat the American International College Yellow Jackets.

But if you've been associated with Quinnipiac University at all in the last 10 years, you know how much it means that this season-long coming out party will end against Yale. There's a reason why that Yale Daily News article was required reading in my freshman seminar class about identity and the University community. It framed our standing as a small school that means nothing to the big dogs down Whitney Avenue, so use your time at QU to try and be better than that; to contribute to changing that reputation and those stereotypes.

Quinnipiac has grown massively in the 18 years since Pecknold took over the hockey team, opening a nationally-known polling institute, two new campuses, the sports arena and a soon-to-open medical school in addition to booming enrollment.

A lot of that success was helped along by athletics and the hockey program, and if the Bobcats beat the Bulldogs on Saturday night in Pittsburgh, even more people will begin to notice the suddenly not-so-small school tucked away at the foot of a mountain in Hamden, Conn. And maybe Yale will finally see Quinnipiac as more than the drunks who pee on their buildings.

• Does Tiger need a green jacket to be "back?”