Scenes and sounds from Boston's surreal journey back to normal

Paul Flannery writes from Boston about memorials, a hockey game, and a town moving slowly back towards normal.

Share All sharing options for: Scenes and sounds from Boston's surreal journey back to normal

BOSTON — Emerging from the underground at Park Street and stepping into the light of a gorgeous day, the Common wasn't empty but it wasn't nearly as full as it should have been. That wasn't stopping the man barking out his good cheer from his corner perch.

"GOOD MORNING! It's 60, 61 degrees this afternoon. The Red Sox won 7-2 and it's a wonderful day. The Freedom Trail is that way. The Public Garden is over there. Have a great day!"

He continued his message to everyone who passed by as if on a recorded loop. Army personnel and the SWAT guys with machine guns hung in the distance.

The Swan Boats were running again, albeit with plenty of good seats still available. On the footbridge a man played a hurdy gurdy on one end while another did his busking work with a curious one-string instrument, almost like a cello. I've seen him around town before in various subway stations and the like. He's good. It sounded like he was playing a jig, but everything sounds like a jig if you listen long enough.

A few hundred feet away, there was a roped off section to make way for the armored cars and a staging area. The Back Bay is a crime scene, stretching down Boylston St. from Berkeley to Huntington Avenue where someone tried to blow people up and tear our heart out. I went looking for normal. 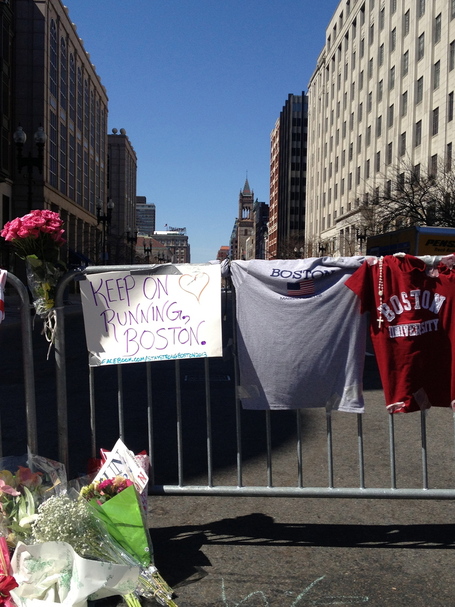 Makeshift memorials have been set up along the barricades, which naturally attracted the satellite trucks and TV reporters doing their standups. The Globe's powerhouse metro columnist Kevin Cullen was doing an interview with Extra's Maria Menounos. Maria's a Medford girl and thus one of ours. She's also from the same town as Krystle Campbell, the 29-year-old woman who was killed on Monday.

Among the flowers, signs and faded Red Sox caps left on the scene at the corner of Berkeley and Boylston someone had hung a Boston University t-shirt. Lingzi Lu was a BU grad student from China studying math and statistics who was at the finish line when the bombs went off. She died on Tuesday. Down the block, demolition experts were conducting a sweep of the street.

A man from Maine was there volunteering for the Red Cross as a crisis counselor. On Monday he was called and asked about his availability, which he didn't really have but he showed up anyway. Like the runners in their marathon jackets, he hasn't left yet. We chatted about my class at Boston University and I got the distinct impression he was giving me therapy.

They were tired, sad and very on edge.

We had heard the sirens from our classroom a little after 5 p.m. on Tuesday. One of my students told me they were clearing the College of Arts & Sciences building across the street because of a suspicious package. They were tired, sad and very on edge. Half of them had been at the finish line on Monday working on stories. They all left a half-hour or so before the madness started.

I let them out early just before the school made the announcement that one of our students was among the dead. On the way home, WMBR played the Pixies, Sebadoh and Mission of Burma. I opened the windows, cranked the stereo and let the sounds of punk rock Boston wash over me.

Newbury St. runs parallel to Boylston and it was open to traffic. This is the boutique shopping destination in Boston. Normally on days like this with the sun shining bright overhead, one would be dodging tourists and grumbling about their lack of street savvy. Instead, outdoor cafes that should have been filled were mostly empty.

Each cordoned off block was filled with more flowers and signs. Someone had scribbled the following in chalk:

That's from the song, "Gonna Be A Blackout Tonight" that the Dropkick Murphys recorded in 2003. It's a Woody Guthrie number from the 40s and it will do just fine right now, thank you.

At the other end of the street is Newbury Comics, one of the last vestiges of the old scene. That's where I first heard the Modern Lovers, the Bosstones and Letters to Cleo. I went in to cop the new Kurt Vile record and started feeling human again.

There were kids throwing a frisbee around on the lawn out by the Christian Science Center over by the Boston magazine office where my wife and I used to work. Some downtown workers were on the grass enjoying their lunch. I grabbed some for myself and watched the day float by for a while. I texted my wife who texted back, "Like old times!"

There's plenty of time for journalism lessons and media navel-gazing but right now it's beyond me.

Twitter started blowing up about then. The media shitstorm was underway.

I didn't go to the Moakley Courthouse and I'm glad I didn't after what went down. There's plenty of time for journalism lessons and media navel-gazing but right now it's beyond me. CNN can go screw itself, though.

Somewhat predictably there was a Code Red and everybody was evacuated leaving a bunch of reporters out on the street. My man Billy Baker from the Globe who's a son of Southie and has been out here doing amazing work tweeted that a lone bagpiper arrived, played a few songs and left.

The streets around the Garden were full of Bruins jerseys and the Fours was doing its usual brisk business. I bumped into the great Leigh Montville and we talked for a moment. "The Bruins are the soul of Boston," he said. I'll buy that.

The B's and C's and Sox and Pats. They all mean something a little bit different. The Celtics are our pride, the Sox are our daily conversation and the Patriots are our f-you to everybody, which is much different than when they were our joke. Things change. The Bruins, like Montville said, are our soul. Muckers and grinders for a hardhat city and all that.

There are worse things that being known for our sports teams although I'll admit the caricature sometimes comes back to bite us in the ass. Whatever. It's our thing and if we express it a little too loudly that's all part of our personality.

The security lines outside the Garden were long but it seemed like everyone got in before the anthem, which was the whole point of the evening for a lot of us.

Rene Rancourt always wears a tuxedo. I'm quite certain about this. He has perfect hair, a full mustache and is a dead ringer for the little plastic groom on top of a wedding cake. He's been singing the anthem at Bruins games since the mid 70s and was brought into the fold by the great Garden organist John Kiley.

Rene's signature anthem move is the fist-pump and for particularly big games he's been known to throw in a double or even a triple. He reminds us of the way things used to be when Bobby Orr was king and the bumper stickers read, "Jesus saves, but Espo scores on the rebound." You can close your eyes and imagine some of the friends of Eddie Coyle up in the rafters when he sings.

Rene came out in his familiar operatic tenor but by the time he hit, "what so proudly we hailed," he put down the mic and began conducting the Garden crowd like they were the Pops all the way through, "the land of the free."

We had the anthem and that was enough.

Once the game got underway, the crowd chanted "WE ARE BOSTON" and everyone cheered for the goals and booed Buffalo's goon. Somehow the Sabres scored with 26.1 seconds left and sent the game into overtime where they won in a shootout. Afterward some of the players expressed regret about letting the city down, but they didn't. We had the anthem and that was enough.

This is the part where we talk about sports and healing, but it's happening all across the city at candlelight vigils in places like Garvey Park in Dorchester where mourners came out to honor 8-year-old Martin Richard. It's happening at bars like Parlor Sports in Cambridge where they raised thousands of dollars by the pint, and at T.T. The Bears where local bands did the same. It will happen in Copley Square when the barricades come down and we all walk over the finish line.

I walked out in the cool night air and the scene around Causeway St. was subdued. Cops were massed at every intersection and the bars seemed a little quieter. Someone had hung a t-shirt with Martin's name over the Orr statue outside the Garden. There were reports of a bomb scare at the State House.

We're still hurt and sad and pissed off, and we will be for a long time. But we're coming back. We Are Boston.