Huberdeau is just better than most other players, and that makes some people mad.

He might not win the Calder Trophy as the league's best rookie (though he should), but Florida's Jonathan Huberdeau is certainly the most exciting first-year player to watch this season.

Huberdeau had the Panthers' first goal of the game on this beauty, stickhandling deftly around the New York defenseman before scoring with a perfectly-placed shot:

When a goal this beautiful happens, you've got to love it. Even if you're a fan of the team getting scored on, you should just sit back and bask in the pure joy of hockey being played at its highest level. Really, who could possibly be angry with such an elegant and perfect goal? 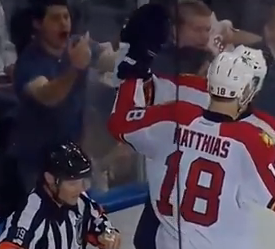 • Jimmy Howard’s case for the Vezina