The deadline appeared to be rather boring until the final hours. Who got the best of things when business picked up?

The NHL Trade Deadline was making news for all the wrong reasons for most of Wednesday.

That's because nothing -- no, I mean literally nothing -- was happening. Then Rob Flick got traded, and he started trending on Twitter. That's how desperate everyone was to talk about actual trades.

Now that the wave of moves has come and gone, it's time to look at some of the winners and losers from the day. And, no, we're not talking about Darren Dreger or Nick Kypreos.

* Marian Gaborik: There is no secret here. Gaborik, playing for the New York Rangers, waived a no-move clause to go to Columbus. I wonder why that could be. Maybe it's related to John Tortorella, the Rangers coach who finds a way to rub more than a few people the wrong way. Torts says he'll "miss" Gaborik, but even if you believe him, the feeling probably isn't all that mutual. Gaborik will be cherished in Columbus, where the long-suffering fanbase is craving some star power. He'll build off a disappointing run in New York this year, and should at least flourish in the short term as the Blue Jackets chase a playoff spot for the second time in franchise history.

* Ryane Clowe: He picked his trade destination, possibly forcing San Jose to take an inferior deal from the Rangers. Then he scored two goals in his Rangers debut. In just a few hours, Clowe justified the draft picks the Rangers gave up to San Jose, and also showed his zero goals in 28 games was a bit of a fluke.

* Minnesota Wild: There are Sabres fans who wish their team didn't feel it necessary to trade the popular Jason Pominville. There are Wild fans irritated that general manager Chuck Fletcher coughed up two prospects and a first-round pick to make the deal. In the end, it's a huge psychological boost for a Wild team that just hasn't been known for making these types of moves. Pominville helps a struggling power play, wakes up a penalty kill that hasn't been good lately, and adds leadership to a team that has a lot of it (no such thing as too much).

* Buffalo Sabres: Yeah, they win here, too. There is no pressure to keep Ryan Miller, now that the Sabres have two hotshot young goalies to look at once Miller departs. Jhonas Enroth will have competition from Matt Hackett, one of the key pieces in the Pominville trade. Hackett goes to Rochester, but that's just for now. Johan Larsson, the forward Buffalo got, has the tools to be a top two-way, all-situations type of player. Sound familiar, Sabres fans? Since there was a need to move Pominville, the return here is pretty good for Darcy Regier.

* Ray Shero: He did all his work before the deadline day, acquiring Douglas Murray, Jarome Iginla, and Brendan Morrow last week. Then he got Jussi Jokinen from Carolina Wednesday to give the team more depth while Sidney Crosby is out. Shero had a masterful deadline week-plus.

* Ottawa Senators: For Ben Bishop, who hasn't shown himself to be anything better than a marginal NHL goaltender so far, the Senators picked up young forward Cory Conacher, who immediately becomes their leading scorer. Well done, Bryan Murray. 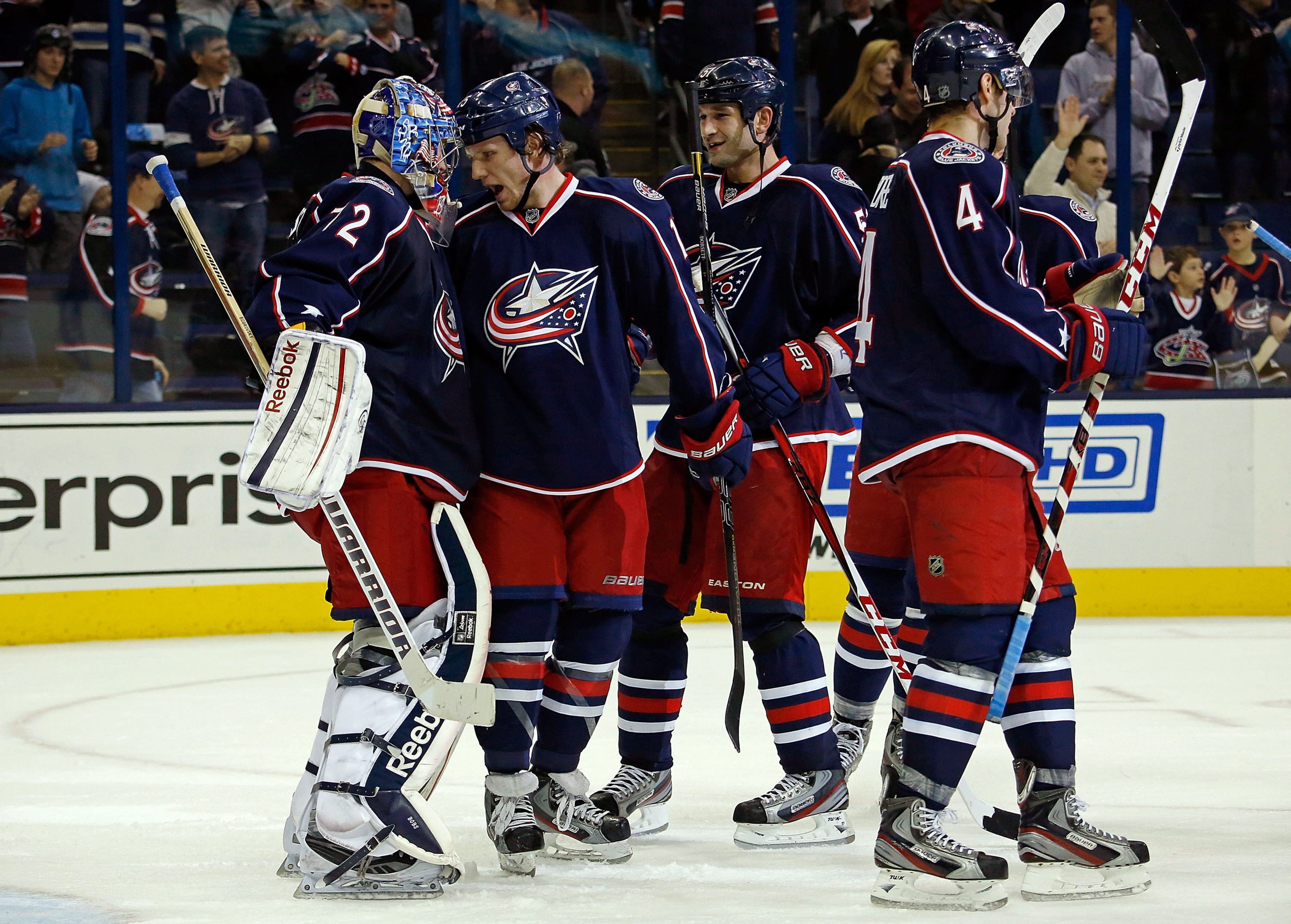 The Columbus Blue Jackets, shockingly, were the biggest winners on deadline day, writes The Cannon.

* Jarmo Kekäläinen: The first-year general manager of the Blue Jackets not only got Gaborik, but he also swung a deal with Philadelphia, swapping goalies (Steve Mason for Michael Leighton). Oh, and he got a third-round pick from the Flyers along with Leighton. If that isn't enough, Kekalainen made these moves without surrendering any of the three first-round picks Columbus has in June. Great work by the new guy.

* Boston Bruins: Wade Redden and Jaromir Jagr might not be spring chickens anymore, but both can help this team win in the spring. Jagr should inject some life into a power play that is struggling, while Redden helps solidify the blue line.

* David Poile: Yes, he ended up making Martin Erat's request for a trade public. But unlike Scott Howson last year, Poile did it only after actually fulfilling the request, and he did so with the full cooperation of the player. The return from Washington -- 2012 first-round pick Filip Forsberg -- is solid, but more than that, I like what this move says about Poile. The longtime GM does right by his players, and I think it will help the team's reputation that Erat's request was handled the way it was.

* Raffi Torres: By simply behaving himself for half a shortened season, Torres has rebuilt his reputation to a point where he was deemed worth trading for. San Jose did just that, dealing a draft pick to the NHL Coyotes.

* Roberto Luongo: You couldn't ask him to handle this any better, but Luongo is still a Canuck, and that means he won't be playing much down the stretch. Cory Schneider has clearly established himself as the top goalie in Vancouver. That's a hell of a price to pay for a backup goalie, so we add to the list of deadline losers here.

* Mike Gillis: Blame whoever you want for Luongo not getting traded, but the reality here is that Gillis negotiated that deal, and Gillis is the man who decided not to trade Luongo. Gillis deserves a share of this.

* Cory Schneider: Luongo might be his best friend on the planet. I don't know, and it doesn't matter. Reality is that Schneider knows he has a long-term, big money contract looking at him from the bench. And that's not the kind of distraction a team needs while pushing for a division title.

* Toronto Maple Leafs: Dave Nonis struck out on two chances to get a backup goalie. Certainly, it's hard to blame him for not wanting to take on Luongo's contract and the baggage -- much of which, by the way, isn't necessarily Luongo's fault -- that comes with it. Nonis also couldn't coax Miikka Kiprusoff out of Calgary. The veteran decided to not accept a trade to Toronto, and it sounds like he will retire after the season. Nonis settled for one deadline deal, getting depth defenseman Ryan O'Byrne from Colorado for a draft pick.

* Steve Yzerman: I understand he felt a need to upgrade his goaltending. But I'm not sure Bishop is an upgrade for the Lightning over what was already there. Not only that, but giving up Conacher is just a lot for a goalie who isn't guaranteed to be a full-time starter. Yzerman has made some good moves with Tampa, but this was not one of them.