Alex Ovechkin has won the Hart Trophy as the NHL's Most Valuable Player after an impressive 2013 season. Ovechkin beat out the Penguins' Sidney Crosby and the Islanders' John Tavares.

This is Ovechkin's third Hart Trophy, and his first since 2009. For most of the season a third Hart was the furthest thing from fans' minds as the Capitals withered away at the bottom of the Eastern Conference standings. He was frequently scrutinized by the media (particularly Mike Milbury, twice) for a lack of effort as much of the blame for his team's struggles fell on his shoulders.

Then the switch flipped. Ovechkin went nuts in the final 29 games, tallying 21 goals and 41 points as Washington went 20-7-2 to win the Southeast Division. He edged Steven Stamkos down the stretch to win the Rocket Richard Trophy with 32 goals overall, and 16 of those came on a resurgent Capitals' power play.

So what sets Ovechkin apart from nominees John Tavares and Sidney Crosby? While Tavares was undoubtedly carrying his squad at times, the Islanders were never in the dire straits the Capitals found themselves in midway through the season. Ovechkin's resurgence helped a team most had written off make a run to the playoffs.

As for Crosby, the pace he set in the first half of the year can't be ignored. If he had stayed healthy, he might've run away with this award. But when he missed the final month, the Penguins kept winning while Ovechkin dragged Washington back into the playoff hunt. Arguments could be made for both players, but Ovechkin stole the show in the final month and clearly left a strong impression on the voters.

Here's a breakdown of the voting for the Hart: 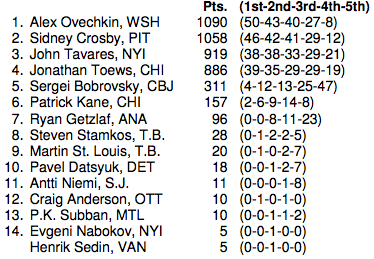 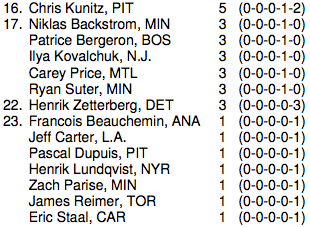 Crosby's performance didn't go unrecognized. The NHLPA named him the Ted Lindsay Award winner for the "most outstanding player."