Sergei Bobrovsky of the Columbus Blue Jackets has been named the winner of the 2013 Vezina Trophy.

Sergei Bobrovsky of the Columbus Blue Jackets has won the 2013 Vezina Trophy as the top goalie in the NHL, beating out reigning Vezina winner Henrik Lundqvist of the New York Rangers and a fellow first-time finalist, Antti Niemi of the San Jose Sharks.

Bobrovsky almost single-handedly carried the Blue Jackets into playoff contention, compiling a .932 save percentage and an even more impressive .941 even-strength save percentage in 38 games. The restricted free agent has yet to sign a deal for the 2013-14 season and there's a chance the Russian could bolt to the KHL, but Columbus will likely pay the now-Vezina winner before that happens. Bobrovsky's also a finalist in the NHL 14 cover vote, going head-to-head with another goaltender and former Vezina winner, Martin Brodeur.

Here's a full look at the Vezina voting. General managers from around the league were polled. 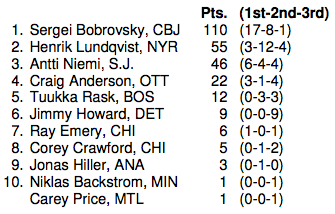