The Carolina Hurricanes unveiled their rebranding efforts on Tuesday when the team's new sweaters were displayed at PNC Arena.

The Carolina Hurricanes unveiled their rebranding effort at PNC Arena on Tuesday, where the Hurricanes presented their first jersey alteration since the franchise's relocation to Carolina in 1997.

While the logo and color scheme remained the same, the team's new jersey kit features a more classic, streamlined approach, which was teased through the team's instagram account over the past week. The home sweater still features red as the primary color but feature white laces on the front. In addition, the sleeves are adorned with white stripes, as are the waist.

The shoulder patches have been removed from the sweater.

Here's what the new kits look like, courtesy of Sean Leahy via the Hurricanes: 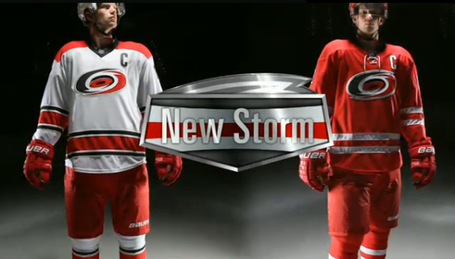 It should also be noted that the team's black third jersey will remain in rotation next season.

What do you think of the team's new look?