The NHL Draft was filled with less drama than we anticipated, but we still saw a few big trades and a slight shakeup at the top of the draft board. Let's take a look at some of the big winners and losers from Sunday's festivities.

Once we realized that the Colorado Avalanche were serious about their desire to take Nathan MacKinnon -- and not hometown boy Seth Jones -- with the No. 1 overall pick, it was simply a matter of which Florida team would land Jones, the top defenseman in the draft. Florida passed on him, surprisingly taking Aleksander Barkov much higher than anybody anticipated.

So from there, it seemed like a no-brainer for the Tampa Bay Lightning at No. 3, given Jones' relative NHL readiness and Tampa's issues keeping the puck out of their net, but GM Steve Yzerman opted to take yet another potent scorer in Jonathan Drouin. With that, Jones fell out of the top three.

"I'd be lying if I said I wasn't thinking about going to those teams," Jones said. "But at the same time I'm excited to be a Predator, and obviously Shea Weber is there. He's a great player, and they have a lot of other great players, and I'm happy to be a part of the organization."

The Predators added the top defensive prospect in the draft, a guy who can be mentored by one of the league's best current defensemen, Shea Weber. Be giddy, Nashville.

It seems like Roberto Luongo is a bit perturbed about not being traded or bought out by the Canucks. He was mentally checked out of Vancouver and we all assumed he was going to be the odd man out. Instead, Cory Schneider became that odd man out, and suddenly Luongo is right back to being The Guy in the crease. But that's exactly why he's a winner on draft day: once it sets in, Luongo will realize he has his job back. That's a good fate.

Valeri Nichushkin was expected to go much earlier than No. 10. We'll let Defending Big D explain the joy of seeing him fall all the way to that point:

This was perhaps one of the more unexpected and incredibly surprising outcomes that Dallas Stars fans could hope for leading into this draft, with a top-four talent falling all the way to No. 10. Seth Jones slipped to No. 4, and quickly Stars fans felt frustrated seeing Elias Lindholm and Sean Monahan go back to back to Carolina and Calgary. Yet the prospect of Nichushkin falling was suddenly very real and a run on defensmen set the wheels in motion.

Oh, and besides landing Nichushkin in Round 1, it seems that everybody suddenly loves the Stars' new jerseys. The reception was lukewarm when they unveiled them weeks ago, but most of the hockey media -- myself included -- got to see them in the flesh for the first time on Sunday. They look great. 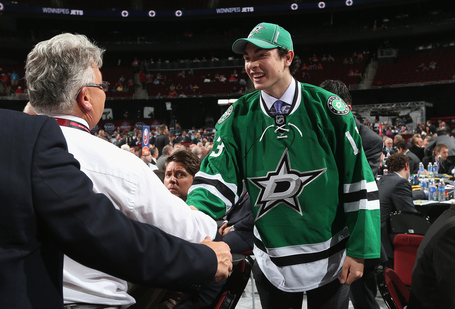 You might call Brodeur a loser. Cory Schneider's move to New Jersey means Brodeur's days as the obvious No. 1 with the Devils are over. But Sunday was about more than that for Brodeur.

The Sabres had two first-round picks -- No. 8 and No. 16 -- and with those picks selected two of the top defenders in the draft not named Seth Jones. Both Rasmus Ristolainen and Nikita Zadorov are Sabres prospects now, and coupling those selections with the acquisition of Jamie McBain from Carolina on draft day, Buffalo now has a ridiculously bright future on the blueline.

The work stoppage pushed the 2013 NHL Draft to a single, long-winded eight-hour event instead of the usual two-day event, and by the time it was over around 10 p.m. ET on Sunday, everybody knew it. The day was too long, with NBC Sports Network not even able to hold on for the final two hours or so of the event. By the time it all ended, there were no more than -- literally -- 50 fans left in the Prudential Center seats. A good chunk of media went home and only a small group of yet-to-be-picked prospects remained with their families.

In Philly next year, the draft will return to the two-day format. Thank God. All of this in one day was just too much, and it was the one final reminder of the work stoppage that stole four months off the NHL calendar.

Like the inclusion of Luongo on the winners list, this might seem a bit backwards. Schneider is going from one team where he had basically stolen the starting gig from an elite goalie to another team where he's going to have to do it again.

But Martin Brodeur is not going to play hockey that much longer -- probably two more years at the absolute most -- and Schneider will be there to take the reins as New Jersey's next great goaltender. He's away from the two-headed monster with Luongo in Vancouver and gets to settle into a much clearer new role with the Devils.

Bruins GM Peter Chiarelli nearly traded the former No. 2 overall pick at this year's draft. Seguin remains a Bruin, but he does so with the entire world knowing how angry B's management is at his game and attitude. Via the Boston Globe:

"He's got to commit his mind and focus on the one task at hand," Chiarelli said. "He's got to become more of a professional. And you know what? I can say that about a lot of 21-year-olds. I know he got criticized for playing on the periphery and all that stuff. He did. He's got to commit to being a professional and focusing on the game. He does that, we don't expect him to be crashing and banging. Just play your game."

"He's got to become more of a professional." Yikes.

The biggest fall of the first round belonged to Shinkaruk, a small but skilled forward from Medicine Hat of the WHL. International Scouting had Shinkaruk ranked 13th out of all prospects in the draft, but he nearly took a nose dive out of the first round before being selected by the Canucks with the No. 24 pick.

Gillis finally cleared up his goaltending position with the Schneider trade, but it has only led to more questions about his decision-making. Schneider was the clear goalie of the future in Vancouver, having earned the starting spot over Luongo head to head. His contract is better, he's younger and he has a lot more potential. Yet it's Luongo -- a disgruntled Luongo, at that -- who's staying in town.

And it's not even like Gillis got a great return for Schneider, who could have commanded much more than just the No. 9 overall pick. Gillis didn't even get a roster player in return, and Bo Horvat, while a nice prospect, won't be an impact player in the NHL for at least several years.

Gillis fudged his goaltending conundrum. He gave away the wrong guy.

It's been stuck in your head for months. You thought you were done with it a week ago when the playoffs ended. Nope. Fall Out Boy rang out through Prudential Center at least five times on Sunday (see the Shinkaruk video above, for example!), but that was it's last gasping breath.

Fall Out Boy's love affair with the NHL is now over. Its reign of terror has come to an end.