The Anaheim Ducks will face the Los Angeles Kings on Jan. 25 as part of the Stadium Series. Here's what the building will look like on that night.

As the calendar nears September, the benefits of fall slowly start to become more visible. For hockey fans, that means announcements about new jerseys, the olympics and watching paint dry. On Tuesday morning, that included news about outdoor hockey.

In 2013-14, hockey fans will have ample opportunity to experience unique events as the NHL has scheduled multiple outdoor games as part of the Stadium Series, which will augment the regular season schedule. While 'traditional' markets such as Chicago and New York will be hosting games, the league is taking a progressive approach to outdoor hockey with the inclusion of a contest at Los Angeles' Dodger Stadium between the Anaheim Ducks and Los Angeles Kings.

Here is what the stadium will look like when the two teams meet on Jan. 25, via Dennis Bernstein of the Fourth Period: 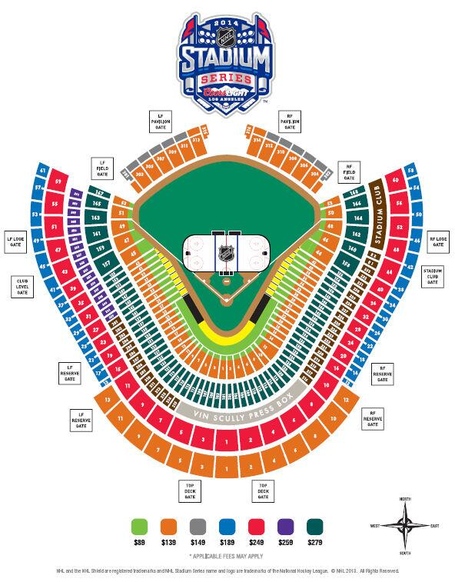 Based upon the graphic, seven different price ranges will be available for tickets. The lowest total is $89 (which I'm assuming is standing room tickets) and the highest is $279.

• How to fix the Penguins penalty kill

• The NHL’s diving rule needs to be changed