The San Jose Sharks unveiled new jerseys on Tuesday morning. They're basically the same as the old ones.

The San Jose Sharks unveiled new jerseys on Tuesday morning, which featured alterations to the team's home and road kits.

Realistically, 'new' isn't an appropriate way of describing what the Sharks have done, as the jerseys are minimally different from what the club wore last season.

However, changes have been made and the club will be sporting a more simplified look when they open the season on Oct. 3 against the Vancouver Canucks. The biggest change, at least in an aesthetic sense, is the removal of the shoulder yoke and waist piping on both jerseys. In addition, the team has eliminated one ring of orange that used to appear on the elbow piping.

Otherwise, the jerseys are virtually the same.

Here's a comparison between the new teal and the old teal. The new ones are on top. 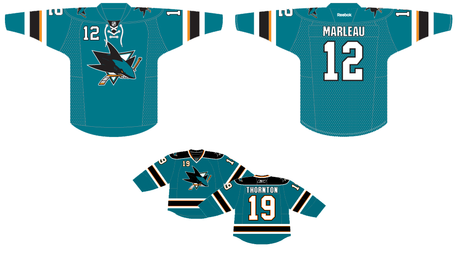 Kevin Kurz of Comcast SportsNet Bay Area wrote on Monday that the jersey change was about more than aesthetics. Apparently, the players prefer the club's black third jersey because of the material they are made out of. That material will now be used with these new jerseys, via CSN Bay Area:

The biggest difference will be in the material. The Sharks have worn their black jerseys in the postseason for the past three seasons, mainly due to the players preferring the lighter feel.

The Sharks' alternate, black third jerseys will still be used during the 2013-14 season.

• How to fix the Penguins penalty kill

• The NHL’s diving rule needs to be changed