The Americans will wear gimmicky crap at the 2014 Sochi Olympics. Come on, Nike.

If there is one essential element to a good looking hockey jersey, it is simplicity. Look at the best NHL uniforms: the Chicago Blackhawks, the Boston Bruins, the Montreal Canadiens. Simplicity wins. When jersey designers start to stray from that very basic template, things go awry.

Team USA's 2014 Olympic hockey jerseys have gone awry, but man ... they were so close to perfection. 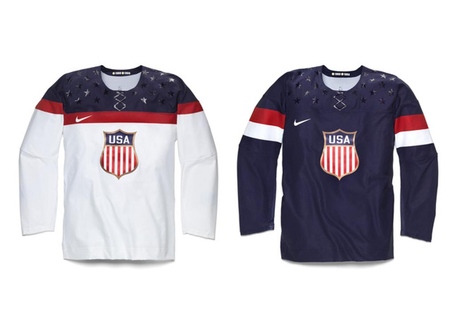 Simply put, Nike -- which also designed Russia's jerseys, unveiled Monday -- has complicated an otherwise classic-looking jersey with gimmicks. Those stars look like they belong stuck on a 4-year-old's bedroom ceiling, and the fake plastic laces? Even David Backes couldn't hold in his criticism.

Nike calls those fake plastic laces "Nike Flywire," claiming that they "provided a closer fit to prevent slipping" while "also providing a nod to traditional lace neck design." Or, you could always just add real laces if "slipping" is a concern.

Nike did much worse with the Russian uniforms, in my opinion, and those include the fake laces, too. We'll expect them to be a staple of the Olympic look in 2014, so you might want to hold off on the jokes, Canada.

As Capitals Hill, a Washington hockey blog, points out, a few tweaks would have made this USA jersey kill. Remove the stars, add some real laces and change the crest to something that's not the K-Swiss logo, and you have a really smooth looking jersey here.

Four years ago, Nike nailed it with USA's jerseys for the Vancouver Games. It kept it nice and simple, and added a third alternate white jersey that paid homage to the Americans 1960 gold medal. Sigh. What could have been.