When it comes to information gathering in the NHL, TSN's duo of Bob McKenzie and Darren Dreger are the two most reliable sources available. Essentially, if Dreger or McKenzie report something, it's the equivalent of an official press release.

With that in mind, it was interesting to see that restricted free agent forward Nazem Kadri called out McKenzie via Twitter on Tuesday night by questioning one of his reports. Kadri is currently involved in a stalled negotiation with the Toronto Maple Leafs that has the potential to drag on for sometime -- some are already gauging the potential of a holdout.

Based upon reports from Dreger and McKenzie, it's believed that Kadri is looking for a multi-year contract with an annual average salary of $5.5 million. The Maple Leafs are reportedly looking to negotiate a bridge contract similar to the two-year, $2.8 million deal Montreal Canadiens defenseman P.K. Subban signed last season.

Based upon Kadri's activity on Twitter, that's not the case: 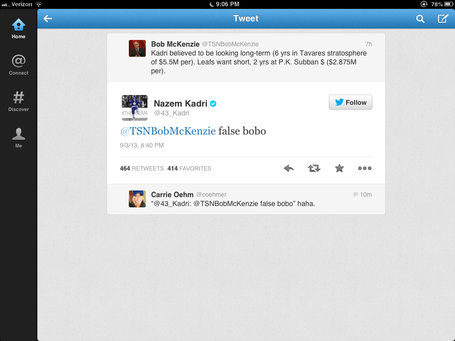 McKenzie subsequently responded to Kadri by expressing confidence in the accuracy of his initial report.

"@43_Kadri: @TSNBobMcKenzie false bobo"/Feel free to provide any details, Nazem, but I'm satisfied with info conveyed in my tweets today.

It should be noted that Kadri's initial tweet has since been deleted and no longer appears on his timeline.

What remains to be seen is what element of the report Kadri took exception with. Considering multiple accounts have detailed the Maple Leafs insistence on a two-year, sub-$3 million deal, it seems most likely that the reported six-year, $5.5 million is what Kadri was referring to.

Regardless, Dreger appeared on 'Leafs Breakfast' with Mike Richards on TSN 1050 Toronto on Wednesday morning and reaffirmed that Toronto is unwilling to give Kadri more than the two-year, $2.8 million deal Subban signed last year.