The Minnesota defenseman might end up logging the most TOI since the NHL started tracking ice time. In an Olympic year, no less.

The NHL has tracked players' ice time in each game since only the 1998-99 season. With just 15 years of data, talking about an all-time record has a little bit of a false ring to it; the time-on-ice lead isn't exactly a hallowed record from ancient lore.

However, the stat isn't so brand new at this point that it's silly to talk about a record. If a player logs the most ice time in 15 years, that's something worth noting.

And Ryan Suter has a legitimate chance to make that happen.

Here are the leaders in minutes played in a season since ice time started being recorded for skaters:

Suter is at 29:38 per game so far this year and hasn't missed a game. Here's how his pace stacks up against the others:

He's more than a minute behind Leetch's pace from 2000-01, which tapered off down the stretch. But he's right in line with the other years, and actually slightly ahead of Leetch's pace in the year he set the record.

This is even more impressive when we consider how usage has changed over the last 15 years. In 1998-99, the NHL's top five leaders in ice time averaged a hair under 28 minutes per game; that figure has fallen about two minutes since then: 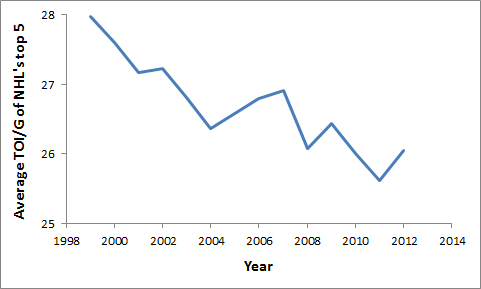 Suter is playing three and a half minutes more per game than what the leaders played in recent years.

And he's doing it in an Olympic year where he'll have extra games that don't count towards this record. Since there's no obvious dip for the Olympic years in the above plot, I wouldn't assume that the team will reduce his minutes; he'll just be asked to play that much more.

Ice time may not have the history behind it that a record for goals or points has, but Suter's current usage is amazing nonetheless. I'll be watching down the stretch to see if he keeps it up.

• Here are the midterm 2014 draft rankings

• The factors that drive L.A.’s success