Why do we get mad at hockey players for having fun?

Share All sharing options for: On P.K. Subban's celebration and silly, pointless outrage

On Thursday night in Ottawa, the Montreal Canadiens got absolutely trounced by the Senators. After going up 3-0 on just five shots, Montreal allowed Ottawa to take it to them to the tune of 38 shots and 24 scoring chances through two periods of play.

More: On the Habs at Eyes on the Prize

It took a long time due to the absolute brilliance of Carey Price, but eventually the Habs blew the lead, trailing 4-3 going into the third period. A fluke goal from Sens defenseman Jared Cowen on his own net brought the game to overtime, where P.K. Subban capitalized on a turnover by fellow Norris Trophy winner Erik Karlsson, and beat Anderson to win the game.

Upon seeing the red light go on, Subban was ecstatic -- as you'd expect. He burst up from the ice and bolted toward his teammates, almost jumping instead of skating. They tackled him and pushed him to the ice, and once they got off of him, he grabbed the CH crest of his jersey and motioned it towards Habs fans in the audience. Then, he did it again while walking down the tunnel toward the locker room.

Back in the '90s, Don Cherry featured highlight reels of the best celebrations on his famous "Rock 'em, Sock 'em" tapes, featuring the likes of the Jaromir Jagr salute, Teemu Selanne shooting his glove out of the air, and Theo Fleury's knee slide.

20 years later, the same man spent a week ripping Nail Yakupov for doing Fleury's knee slide because he didn't feel the game was important enough to warrant it. He did the same for a Subban celebration for an overtime goal in 2010-11. Why?

Fleury himself took to Twitter after Yakupov's celebration to say it was excellent, so if you're not offending the guys who did it before you, what does it matter? 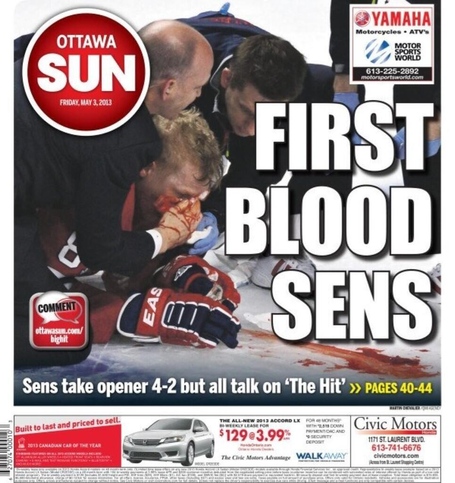 The main source of outrage over Subban's celebration seems to be the Ottawa Sun, with Bruce Garrioch saying that Subban's postgame celebration "didn't go over well." With whom, Bruce? If someone like Garrioch doesn't make a big deal out of it, is anyone upset about it? Let's not forget that this is the same publication that ran this front cover during last season's first-round playoff series.

Reveling proudly in a player receiving a cheapshot, being concussed, and blood pouring from his broken nose and teeth is all good, but a player celebrating an overtime goal in a game his team had no business in? That's unacceptable!

TSN's Bob McKenzie said it best when he joined TSN Radio's morning show in Montreal on Friday, explaining that there is nothing contrived about the pure ecstasy Subban is experiencing in that moment. He's an emotional guy, and that was an emotional game that the entire team felt they needed to pull out for their goaltender. It's no secret that Price and Subban are very close, and to be able to get that win for his friend obviously mattered a lot.

When you start playing sports as a kid, it's rarely with the intention to go professional. You do it because it's fun. Yes, professional NHLers make millions of dollars a year, but that shouldn't stop them from having fun. These people are not robots, they're emotional people like anyone else. They experience ups and downs, and they have every right to express their joy, especially when it's so undeniably entertaining.