The referees in Vancouver didn't have much time to settle into the game before a line brawl erupted on the opening faceoff.

Tortorella goes after Flames during intermission

Flames coach Bob Hartley decided to start the game with his fourth-liners. Vancouver coach John Tortorella, stunned by this decision, decided to send out his goons as well.

As expected, all of them were sent to the penalty box or to the dressing room, resulting in one heck of a box score. 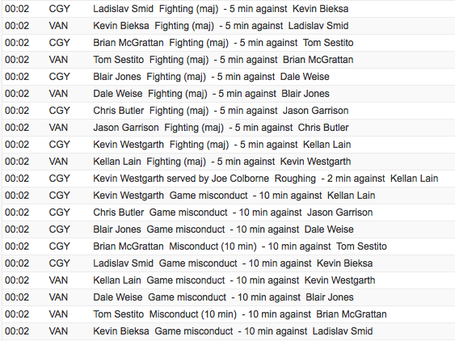 By the way, that was Kellan Lain's NHL debut. It might be the shortest debut in league history.

Meanwhile, the sin bin got a little cramped.

Party in the penalty box! pic.twitter.com/hle9XrC6mh