Martin Brodeur has played in over 1,200 career regular season games in the NHL. On Sunday, he played on the worst ice surface of his career.

New Jersey Devils goaltender Martin Brodeur has experienced all kinds of ice surfaces over his 21 year career in the NHL. On Sunday, he said he played on the worst of them all.

"When you went on it was worse and worse. It was tough," Brodeur said. "It was so cold out there."

Fortunately, Brodeur only had to play two-thirds of the contest, having been pulled after allowing six goals through forty minutes of play.

Backup goaltender Cory Schneider was called in from the bullpen for the third period after Brodeur recommended to coach Pete DeBoer that his understudy get a chance to experience the environment, via The Bergen Record:

"At that point, I had a conversation with him and we both agreed and it was actually his comment that, ‘How about you give Schneids the experience of a period in this environment,'" DeBoer said.  "It wasn't working for him or our group the way it was and I give him credit for that. It made sense, too."

Later in the evening, a scathing review appeared on Yelp from a poster named Marty B., who was non too pleased with the quality of his experience at Sunday's Stadium Series event: 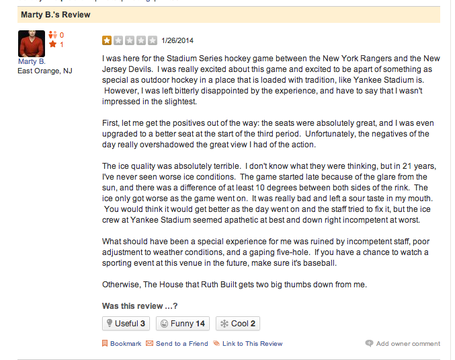 Fortunately for Brodeur and the Devils, Sunday will be their last foray into the outdoors this season. However, Yankee Stadium will be in use once again when the Rangers challenge the New York Islanders on Wednesday night. From there, the league will conclude the Stadium Series with a game at Chicago's Soldier Field on March 1 and wrap-up the entire outdoor slate with the Heritage Classic on March 2.