Beach volleyball, fireworks and KISS: The NHL at Dodger Stadium

The first outdoor ice hockey spectacle in Southern California doubled down on "spectacle." A look at the good and the bad of manufacturing an experience.

Share All sharing options for: Beach volleyball, fireworks and KISS: The NHL at Dodger Stadium

On Saturday, Jan. 25, hockey came to Dodger Stadium. As part of the NHL Stadium Series, a handful of outdoor games meant to supplement (not capitalize on, certainly not, my heavens) the annual (and rather lucrative) Winter Classic, Los Angeles seemed like the novelty to end all novelties.

"Ice hockey? Outdoors, in California? Now this, I've got to see!"

That seemed to be the line of thinking from the higher-ups who put this sort of thing together. The experience ended up being a spectacle and certainly surreal, although being at the stadium for two days definitely left the impression that everyone involved worked overtime to make ice hockey in Los Angeles feel even more inauthentic than it should have.

The stadium was open to the press on Friday, an open media observation of the Kings and Ducks as they practiced on the rink, which was plunked down square in the middle of the field, where the infield normally resides. As the players skated under the first cloudy day that Los Angeles had seen literally in weeks, the press snapped photos, milled about and wondered why in the world there was a beach volleyball court in left field.

The platforms surrounding the rink rocked and swayed with each step. The outfield was cordoned off (they didn't want anyone futzing with the stage where KISS would be performing, presumably). The Kings and Ducks "dugouts" made for a long walk in skates -- down the ramp to the dugout from the clubhouse, through the dugout, across the grass to the rubber mat leading into the rink, then onto the ice.

As Jonathan Quick stood between the pipes, deflecting three-quarter-speed shots during practice, the blue ice turned to slush within 10 minutes. And that was in a relatively-temperate 60 degrees. The media asked questions of the few players they were given access to and did some more standing around. It was de rigeur to comment on the strangeness of the setting and to audibly wonder how much of a mess the ice would be during Saturday's game.

By mid-day on Saturday, it was 80 degrees in Los Angeles. Perfect hockey weather, obviously. Things cooled down a bit by late afternoon, when the stadium opened for the press. When media arrived, there was already a foursome playing beach volleyball in the left-field court. Playing badly, but playing nonetheless.

When the gates finally opened, fans showed up in droves, quickly filling the lower levels, an overwhelming number clad in all sorts of hockey paraphernalia. Although the Kings were the "home" team, there was a large contingent of Ducks fans. Moderately surprising, considering that people from Orange County are reluctant to leave Orange County unless their home is actively on fire, but some solid proof that the crowd would be comprised mostly of genuine hockey fans, rather than people there for the show.

Which makes everything that happened around the actual hockey even more curious.

As people continued to trickle in, the center field fence opened up a tad and out poured dozens of individuals dressed for the beach. They toted beach balls and Frisbees. Some rode bikes. Others skateboarded. One individual rollerbladed. Those on wheels rode around the field on white plastic walkways. The rest settled into the outfield around the beach volleyball court and ... well, "cavorted" is really the only word for it.

At first, it seemed as though these were contest winners, or perhaps those friends or family of people who know people that are omnipresent on or around the field at sporting events, despite not seeming to have any reason to be. But as the pre-game festivities continued and their enthusiasm and gusto with which they were frolicking failed to diminish, it became apparent that these people were probably paid to be doing this.

They were shooed away before the teams took the ice, but they ended up returning at both intermissions, whacking away at that volleyball, booting beach balls back and forth and twirling flying discs. Presumably because the organizers of the event didn't want a moment to go by where the crowd didn't have something flashy to look at, or to forget for even one second that this game was happening in California. What better way to signify that than by presenting 4/6 of the events present on the original California Games?

As the players took the ice for warmups and the starting lineups were announced, the crowd seemed far more interested in booing the Ducks than in cheering the Kings. The boos were thunderous and overwhelming, especially considering just how many Ducks fans are in attendance. The reaction to Saku Koivu was mixed (because how can anyone unabashedly boo for Saku?), while the riotous catcalling of Teemu Selanne practically came all the way back around to a lusty cheer. After that, a string of ever-more-French last names in the starting lineup began to rob the Dodger Stadium crowd of their affinity for booing. 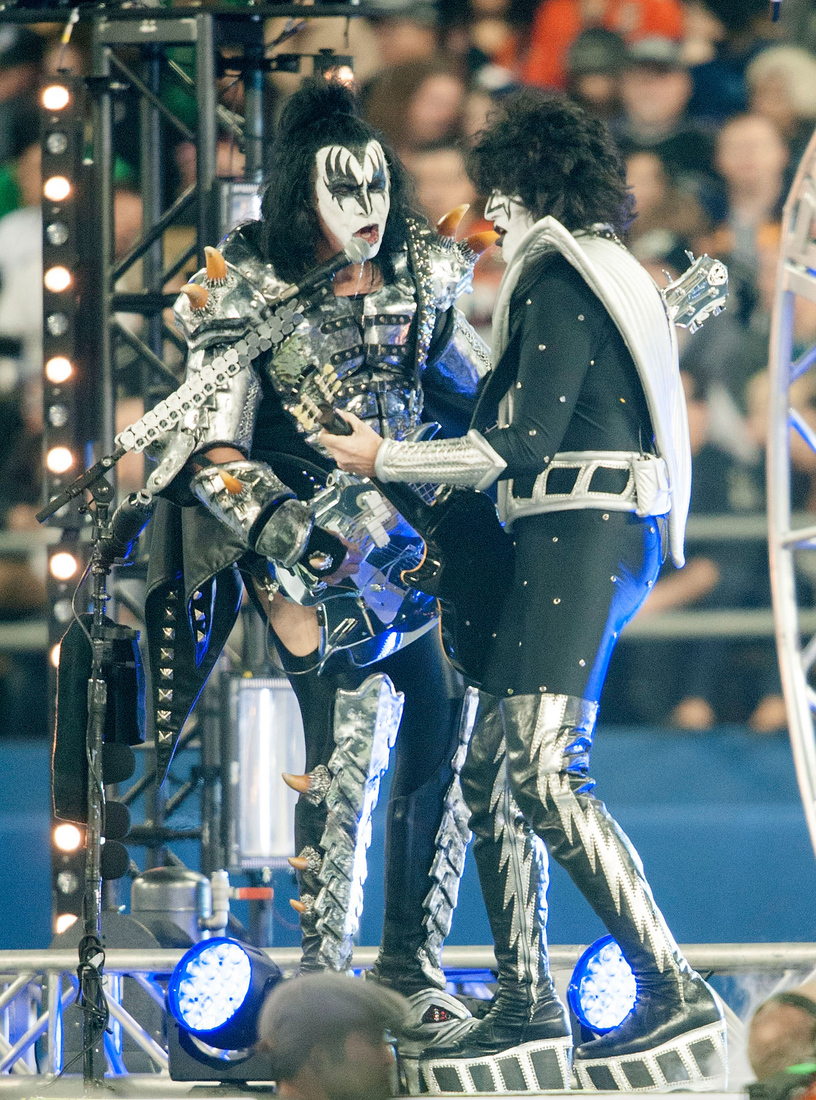 An usher shooed a group of children wearing "Maple Leafs" youth league hockey jerseys off the low infield wall. They scooted back onto it the second she turns her back. One of the children wore a "Bailey" lion head — the visage of the Kings mascot. The Kings fan kids who wore the equivalent of a Little League uniform to the game was spectacularly "baseball in nature." Fitting, given the setting. Perhaps the surest demonstration that this was almost entirely a hockey crowd, however, was this: there was not a single instance of "The Wave" during the game.

Things got even stranger before the game, as KISS took the stage in right field to play a 20-minute set. The mini concert began inauspiciously, as the KISS hype man blew out his mic trying to give an especially throaty version of their patented "HOTTEST BAND IN THE LAND" introduction. Not great.

When KISS was finally introduced, they launched into "Lick It Up." That was their opener. A song about the ... less attractive parts of oral sex, recorded and released as a single during the era when they weren't wearing makeup. A solid choice to open an outdoor hockey game in full KISS regalia, with Gene and Paul flanked by not-Ace and not-Peter. Pyro rocketed from the stage, along with fire, as they wrapped up with "Rock and Roll All Nite," which ended with the stage rising and splitting as the music reached a crescendo. As the Dodger Stadium PA threw it to a highlights video on the big screens, Gene and Paul clung to their platforms as they were slowly lowered back down to stage level to awkwardly depart the stage.

That's what this whole experience is like, so far: all man-behind-the-curtain, no Wizard.

A Dodger Stadium history video, narrated by (who else?) Vin Scully, played to the crowd, in case these Kings and Ducks fans weren't familiar with where their location. Scully himself came out to rinkside with the voice of the Kings, Bob Miller, to introduce the game. Fittingly, Scully got the biggest ovation of the night and proceeded to talk up the game as only he can.

"A game that will set us on our ears. A game like no other."

He looked to Miller for confirmation of this. "Right?" Miller nodded enthusiastically, as thrilled as everyone else to be listening to Vin.

The center field doors swung wide and out trotted the USC Marching Band -- to massive boos from a largely UCLA crowd (or perhaps just largely anti-USC, which is far more likely). Following the marching band, the Kings and Ducks walked out, side by side, from the center field fence down onto the ice. They were followed by Wayne Gretzky, who is there for the ceremonial puck drop. After the game, at least one Ducks player would comment that was an awfully long way to walk wearing skates. The band played on as the first fireworks of the evening are set off.

After Jordin Sparks sung the national anthem and the massive flag was folded up, Vin got in the last word, with a sublime twist on his catchphrase, which delights the crowd. "It’s tiiime for … NHL hockey!" 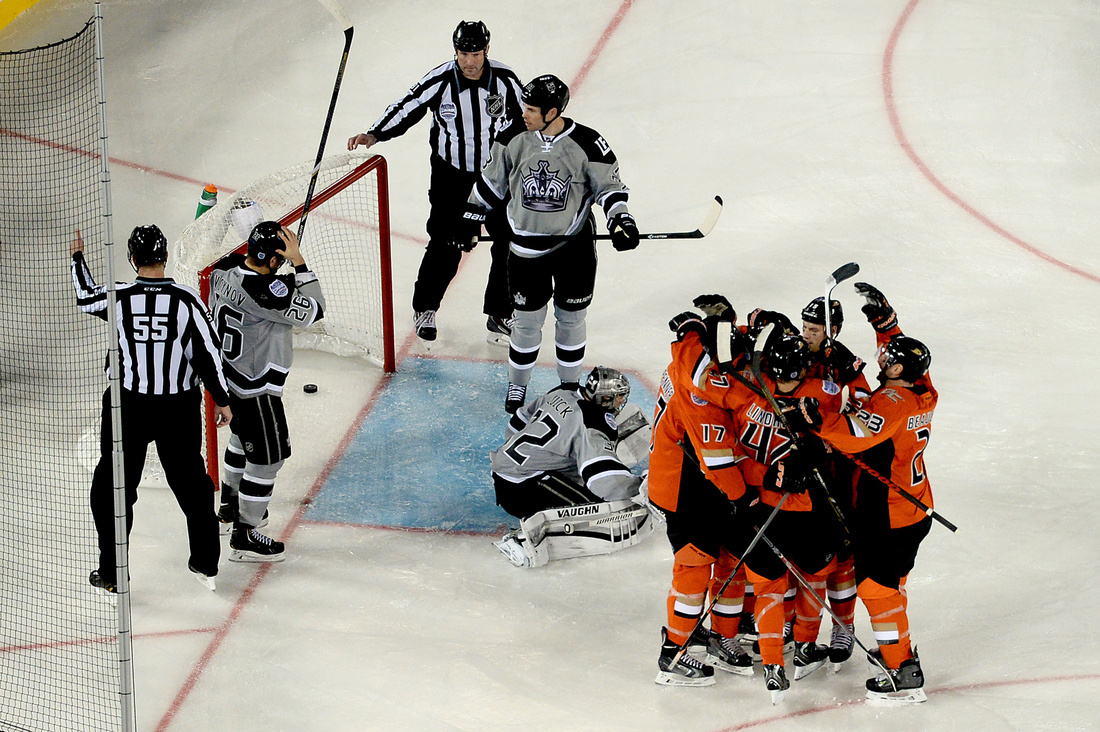 The second goal — a Matt Beleskey goal with 11:48 left in the first — resulted in an even louder ovation from the Ducks faithful. And just like that, it suddenly became a very long night for Ducks fans. Indeed, that remained the entirety of the scoring until the final two minutes, when the Kings opted to go empty net and wound up going down 3-0 instead. The Kings took over 30 shots on goal all night, but Jonas Hiller stuffed them all for the shutout.

Between the puck drop and the end of regulation, Kings fans mostly concerned themselves with scratching their heads at the beach bums in the outfield, eating Dodger Dogs and seeming largely uninterested in the hockey-themed "Angry Birds" scoreboard game.

Oh ... and KISS played again during the first intermission. This time, they opened up with "I Love It Loud," their last makeup-era hit, released after Ace left the band for the first time. Gene Simmons seemed unreasonably insistent that everyone should know this one and sing along. He had vastly overestimated the broad appeal of "I Love It Loud."

When they wrapped up that song, they looked set to launch into a second, before their mics were cut and the organist ripped loudly and enthusiastically into a few ditties, including "Whiskey Bar" by the Doors. Gene stomped around angrily on the stage, while Paul attempted to play it off like this was a planned interlude and danced to the music. When the crossed signals finally got un-crossed, the microphones were turned back on as Paul was halfway into a plug for the band's AFL team, the LA KISS. When the crowd responded to this plug with tepid boos, Stanley abruptly yelled "DETROIT ROCK CITY" and they began their final song to slightly louder boos. Just when the crowd appeared to have turned on them, FIREWORKS changed their minds in a hurry. Hand it to KISS: they've always understood what people love. Sadly, that thing has not always been KISS.

Five For Fighting played the second intermission. They went down a bit smoother. Still, the USC marching band, Jordin Sparks, KISS and Five For Fighting ended up being a significantly more star-studded affair than the Yankee Stadium lineup on Sunday could muster. Shame about the volleyball court.

At the end of the game, when the horn has sounded and the Ducks had won, a massive barrage of fireworks took flight from beyond the center field wall. About 10 seconds after the fireworks stopped, some nasty-looking ash wafted down on the lower level. On New Year's Day, the Red Wings and Maple Leafs played in what was more or less a blizzard in Ann Arbor. That was a real hockey game that felt appropriate, epic and awesome in the correct sense of the word.

The Stadium Series is great, but it’s apparent why they’ve skipped California to this point — "lack of winter" aside. The outdoor games should feel like they’re outdoors. Here on a January night in Los Angeles, everyone was certainly looking at a rink in the middle of a baseball field, but as for the elements … well, it sort of felt like you're in an indoor hockey rink. Which is to say that it doesn’t feel like much of anything.

The novelty is wonderful, the spectacle is spectacular, the crowd is mostly game. But for all the insistence on the epic, singular nature of the event, there’s not a lot of "there" there.

Hopefully they can try again next year.