For 50,000 at Yankee Stadium, NHL's outdoor games far from out-of-style

People are beginning to fear that the NHL is overdoing it with the outdoor games. A lot of those people probably haven't been to an outdoor game.

Share All sharing options for: For 50,000 at Yankee Stadium, NHL's outdoor games far from out-of-style

NEW YORK -- For most of Wednesday night, all I could think about were my fingers. Before the game, amidst a still-empty Yankee Stadium; all through a stroll around the ballpark and a dip down the steps into Monument Park; during the 20-minute long on-ice warmups; through the first period, the second and third -- for all that time, I was nearly positive I was going to lose a damn finger.

A block before I hopped on the subway, a street vendor appeared around a corner. His inventory was a load of shit, and I was hesitant, but he'd clearly seen my look on the face of thousands of potential customers. "They're five bucks for a damn reason, pal. Just buy 'em," may as well have been the best sales pitch I've ever heard. So I bought my five dollar gloves and went to the hockey game, where those five dollar gloves quickly became useless.

At some point during the first period, I retreated to the press box and wrapped my frigid fingers around a piping hot cup of awful concession stand coffee. This was when it hit me:

Holy shit. People actually paid to be here. Hundreds of dollars were spent tens of thousands of times over because people cared more about experiencing a regular season hockey game than they did about their extremities. And they didn't even have a cushy press box to warm up in.

New York City either has many more clinically insane people than we originally assumed, or the NHL is onto something with this outdoor hockey idea.

The NHL is overdoing the outdoor hockey thing. They're giving us too much of a good thing, and they're going to water down the product. They're going to let the genie out of the bottle. That's been the pundit's drumbeat this year, and it's still the common refrain now that four of the year's six outdoor games are in the books.

For those who watch these outdoor games on television, this couldn't be more true. Compare and contrast Wednesday's game at Yankee Stadium with Jan. 1's game at Michigan Stadium. It's no contest -- the Winter Classic on New Year's Day was the perfect outdoor spectacle, to be sold and consumed in a neat little package for a mass audience, both in person and on TV.

If you don't have a personal connection to the teams, to New York, or to Yankee Stadium, a Wednesday night game between the Islanders and Rangers pales in comparison to an event like the Winter Classic. The pageantry isn't anywhere near the same. The spectacle isn't as great, and it's not nearly as bizarre as Saturday's game, in t-shirt weather, at Dodger Stadium in Los Angeles. This was the second game in four days at Yankee Stadium, too, and therefore pretty much an afterthought for everybody who didn't have a ticket. If you weren't personally invested, there was nothing special about the Rangers and Islanders playing a hockey game at Yankee Stadium.

"When you think about the fact that we've played three outdoor games in five days to over 150,000 people, then throw in the Winter Classic and another 100,000 people, it's been an incredible month of special events. To our fans who were here both Sunday and tonight: Simply incredible. I know they had a good time; nobody braves the elements like hockey fans. It was great to see. It was gratifying, and we're thrilled at the response that Yankee Stadium and the New York metropolitan area gave all three teams."

Also, let's not sell the money part short here. Gary Bettman is nothing if not a brilliant businessman, and we all know that's the real reason we're getting six outdoor games this season. Remember how the NHL lost half a season to the lockout last year? Cramming 259,722 fans into three stadiums over four games, and selling merchandise adorned with special edition logos to that many people and more, is a pretty solid way to recoup your losses. 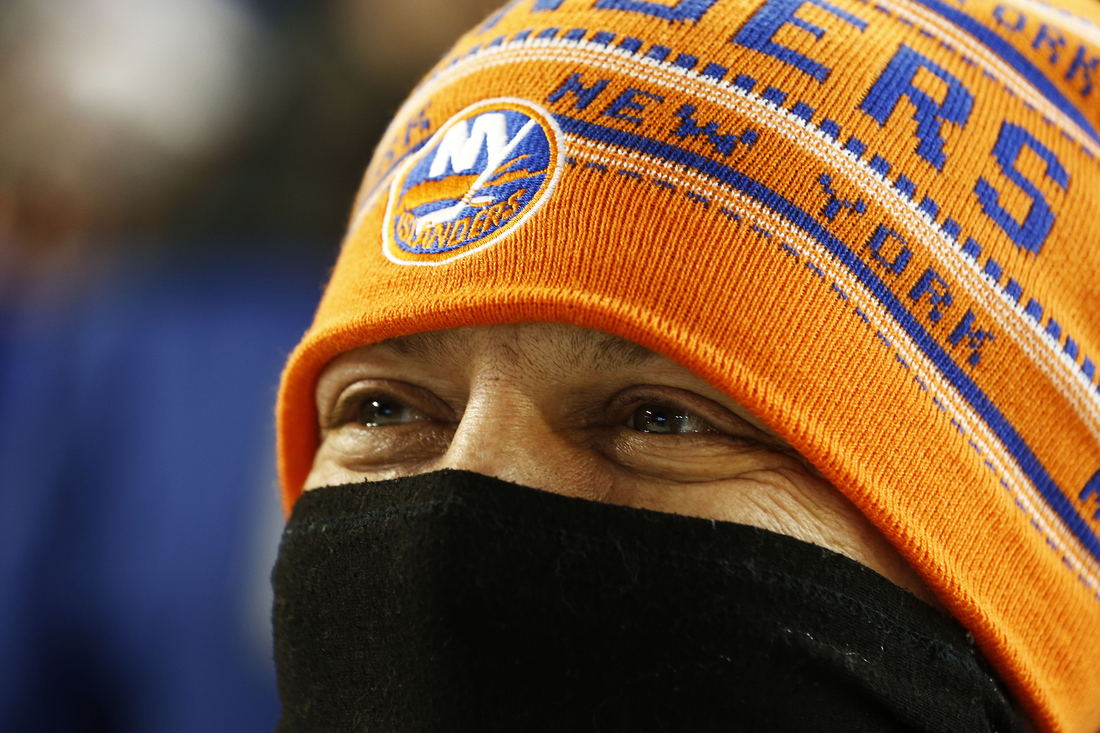 The 50,027 people who bought tickets and showed up to Yankee Stadium on Wednesday night were surely better equipped than I. They had long johns and thick boots and actual gloves, not to mention lots and lots of booze. Good for insulation, or at the very least, helping you forget about your lack of insulation.

I got to the Stadium around 5pm, and had to do a full lap of the outside of ballpark to pick up my media pass. By the time I actually got inside, I couldn't feel my face. 30 minutes later, lines of layered-up fans -- lines reached 50-60 deep in some locations -- were finally let into the park, where they made their way to ice cold plastic seats bolted down to frozen concrete. This would be home for the next five and a half hours.

The wind was howling, which only made the cold that much more unbearable. But on the concourse, nobody really seemed to mind. Between the doors opening at 5:30pm and the final horn, I'd wager that not a second went by without dueling "Let's go Ran-gers!" vs "Let's go Is-land-ers!" chants in some corner of the Stadium.

Maybe I'm crazy, or maybe I was just desperate to escape the cynical hellscape of a press box full of old, cold, bored sportswriters, but I watched the second period from the center field bleachers. I stood there, alone in the biting wind and bitter cold, while hundreds of drunk people swayed back and forth around me, half wearing blue and red, half wearing blue and orange. 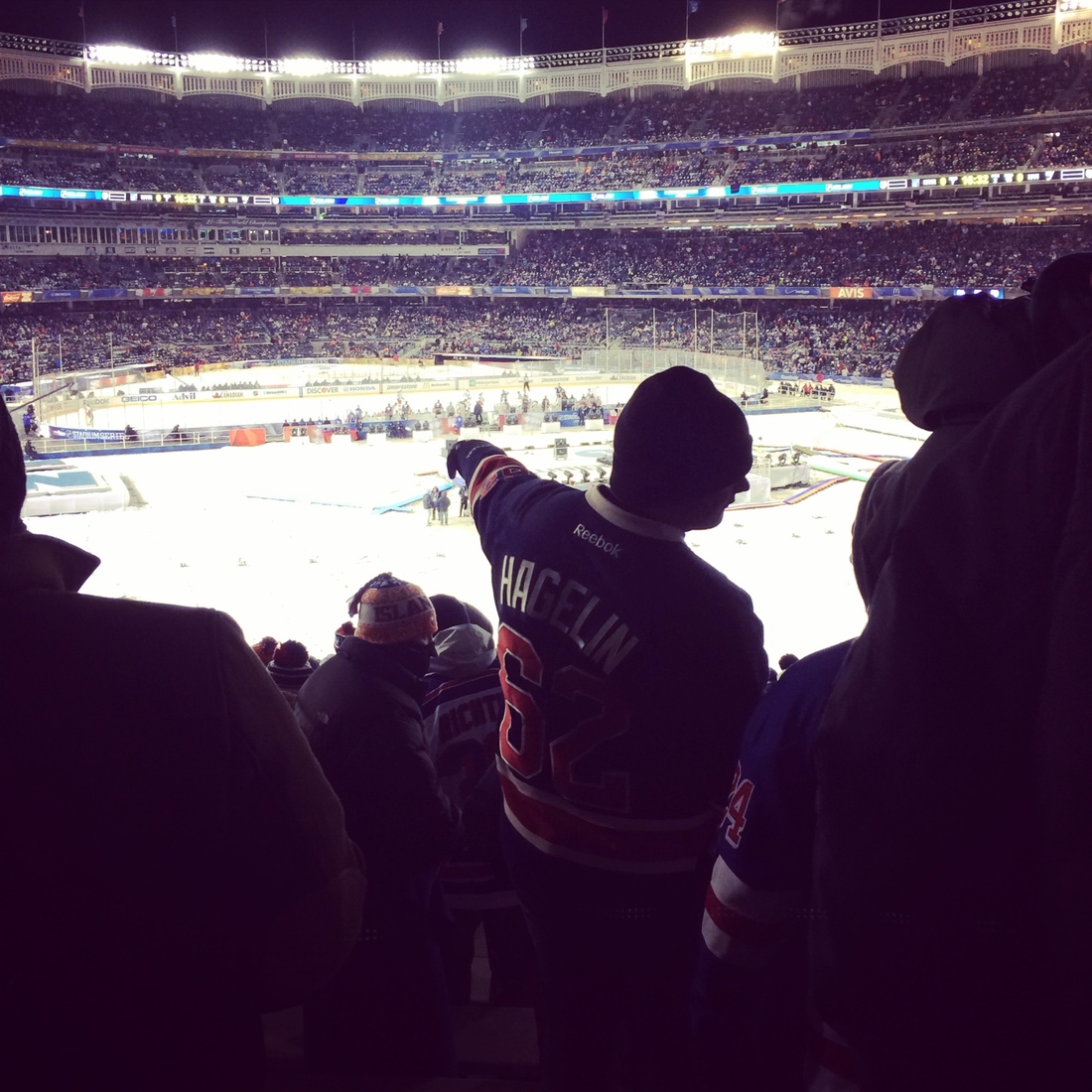 Potvin sucks, or so I've been told. "Yeah, well Messier sucks too."

I still couldn't feel my fingers, and was surely not alone in that. All of which made it all the more amazing just how happy everybody looked out there in the cold. The banter between rival fans, in the midst of a game where two honestly-crucial points were on the line, was downright playful. They yelled back and forth at one another, then united in common hatred against the Devils, Penguins, Flyers and our obviously disinterested intermission entertainment, Cee-Lo Green.

I've never seen the Rangers-Islanders rivalry up this close before, and aside from one John Spano-related joke -- told by an Isles fan, for the record -- it never even got that mean-spirited. I'm sure it gets ugly at times in the upper reaches of Nassau Coliseum or Madison Square Garden, where the alcohol works a bit more easily and the climate is controlled. But on Wednesday in the bleachers at Yankee Stadium, the trash-talking was at both its finest and happiest.

We call these outdoor games "celebrations of hockey," and it sounds completely contrived. But it's really not, and if you've been to one you've seen the actual truth under the marketing. If you've walked through a stadium tunnel to be greeted by the view of an ice rink in the middle of a giant field, snow (or palm trees) spotting the landscape around it, you've seen it. More than 250,000 people have had that experience this season so far, and another 120,000 will join the club in Chicago and Vancouver in March.

Millions might watch these games on TV this season, and many of them will get bored by it, if they aren't already. The Winter Classic is a made-for-TV event, sold to a national audience, played on a national holiday by a nationally (or internationally) relevant pair of teams. The Heritage Classic is the same for a Canadian audience.

The Stadium Series is not. It's a locally-relevant, locally-hyped, locally-enjoyed event. It doesn't matter if Tony in Philadelphia calls into sports radio and thinks it's tired, because Tony in Philadelphia is not in New York. He wasn't in the Stadium on Wednesday night, or in Dodger Stadium over the weekend. The Stadium Series is for the people who were. They understand it differently, as of course they would. 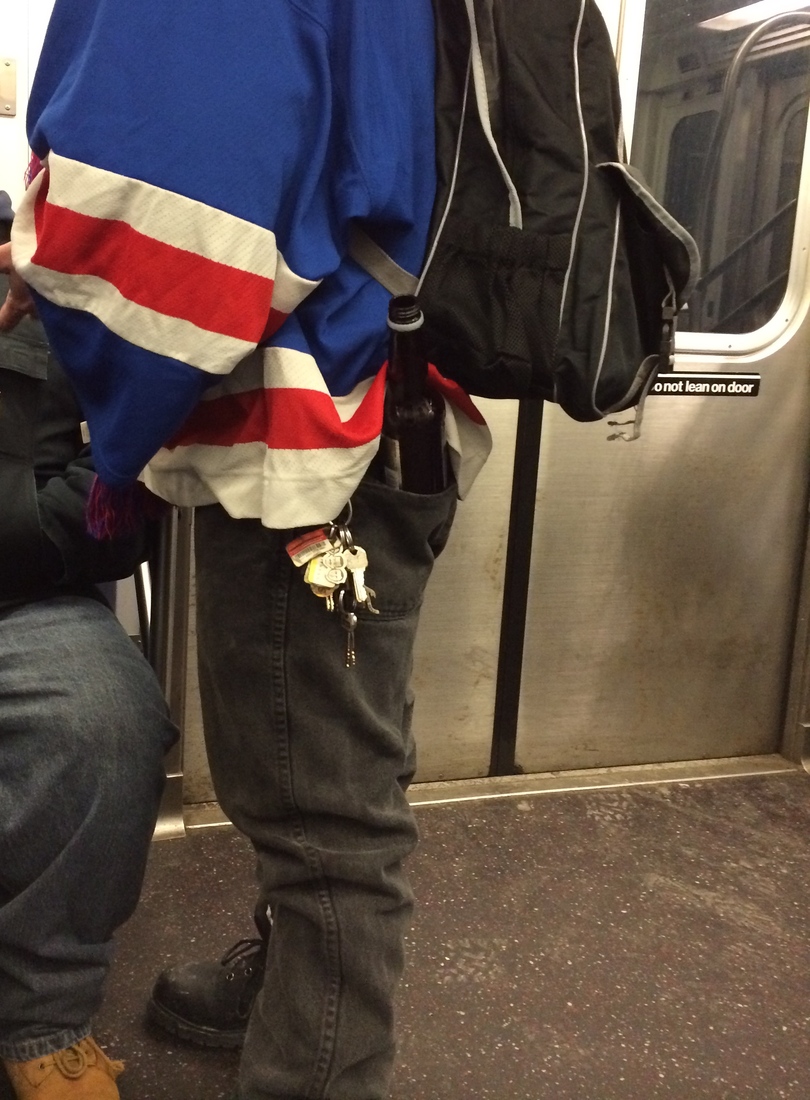 A mildly drunk guy in his mid-30s was standing next to me on the 4 train towards Manhattan after the game. He had an empty plastic Coors Light bottle shoved in his back pocket. I overheard him mumbling with his friends about how awesome it was that his wife let him spend all this money to go to the game.

"Best girl ever. Couldn't have picked a better one."

He pulled his friends a little bit closer, and trying to whisper but ultimately failing miserably, said "Hey, big secret: I spent more on these tickets than her engagement ring."

I'm not one to judge the financial decisions of a complete stranger, but his stone-cold sober friends certainly were: "You think that was the right call?"