Alex the Great: How Ovechkin is scoring so many more goals

Alex Ovechkin's scoring pace puts him close to 65 goals, which would make him the first player to accomplish the feat since he himself did it in 2008. Let's look at how he's doing it.

Share All sharing options for: Alex the Great: How Ovechkin is scoring so many more goals

Don't call it a comeback, he's been here for years.

What Alex Ovechkin has done this season is nothing short of remarkable. The Capitals all-world forward is scoring goals at an alarming rate. The Russian superstar is not a stranger to scoring goals in bunches: He's eclipsed the 50-goal plateau four times in his nine-year NHL career (and one of those seasons was last year's 48-game lockout-shortened campaign in which he was well on his way with 32 goals), and has three times led the NHL in goal scoring. This year, barring an injury, he'll win his fourth Maurice Richard Trophy.

Yet still, as recently as 2012, people were asking what was wrong with the dynamite offensive talent.

Ovechkin and the Capitals had just been bounced in the Eastern Conference semifinals by the New York Rangers. His regular season totals were declining — for two seasons, he failed to score 40 goals, registering 32 in '10-'11, and 38 in '11-'12. It marked the the only times in his career he failed to score at least 46.

But now, once again, he's back to his old self. Ovechkin has re-found his game — really, it started last season — by creating better, more consistent quality goal-scoring chances. A lot of that has to do with his movement, and the Capitals continued efforts to put him in those high-quality scoring situations.

Let's break down what exactly Ovechkin has been doing so much better, en route his torrid start to this season.

Movement off the puck

Finding time and space on the ice for a player of Ovechkin's caliber is no easy task. He's matched up against the opposition's best shutdown guys on a nightly basis, and is the focal point of defensive schemes. But Ovechkin has done a great job this year moving his feet in the offensive zone to find shooting lanes.

The Capitals love to start Ovechkin behind the puck on offensive zone faceoffs, and he pretty much lives there on power plays so he can easily occupy his spot on the left point. That's where he starts this play. 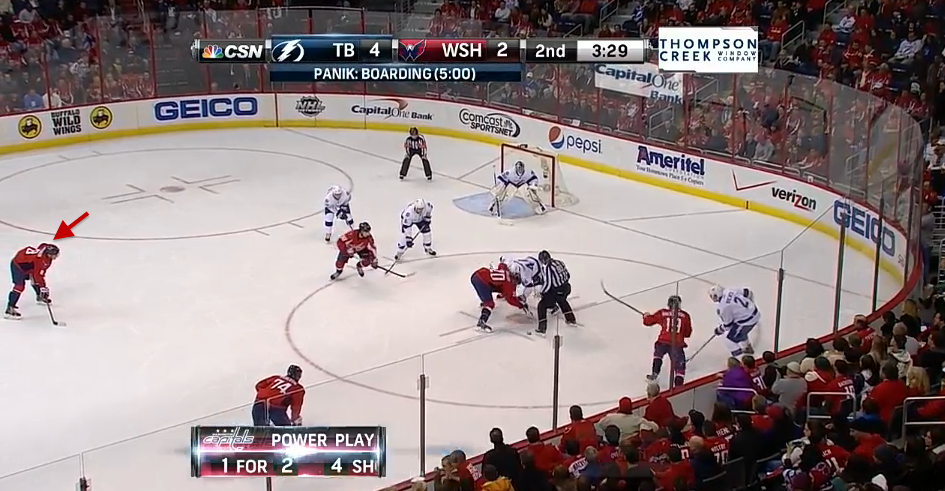 Even as the Capitals win the puck back, Ovechkin is immediately blanketed by a Lightning defender. 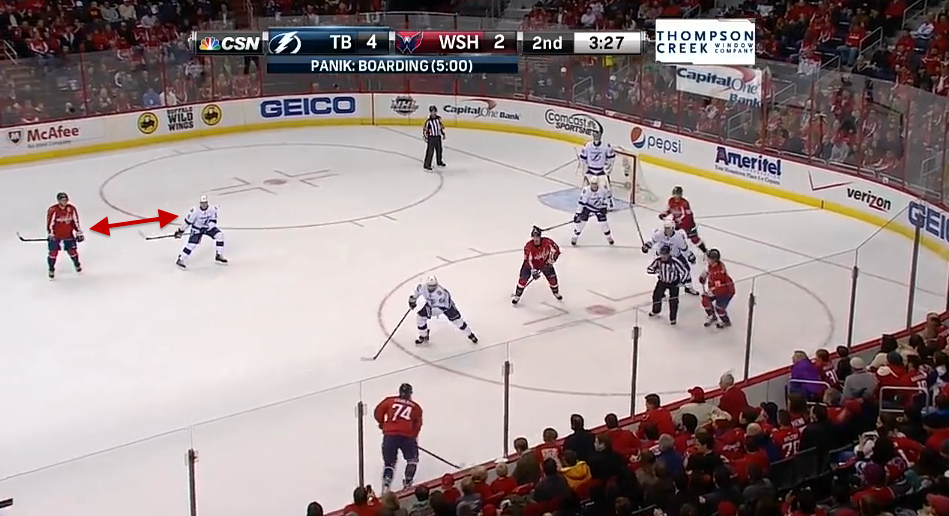 The puck moves down the wall, and Tampa Bay has sealed off any lane for the puck to make its way to Ovechkin. 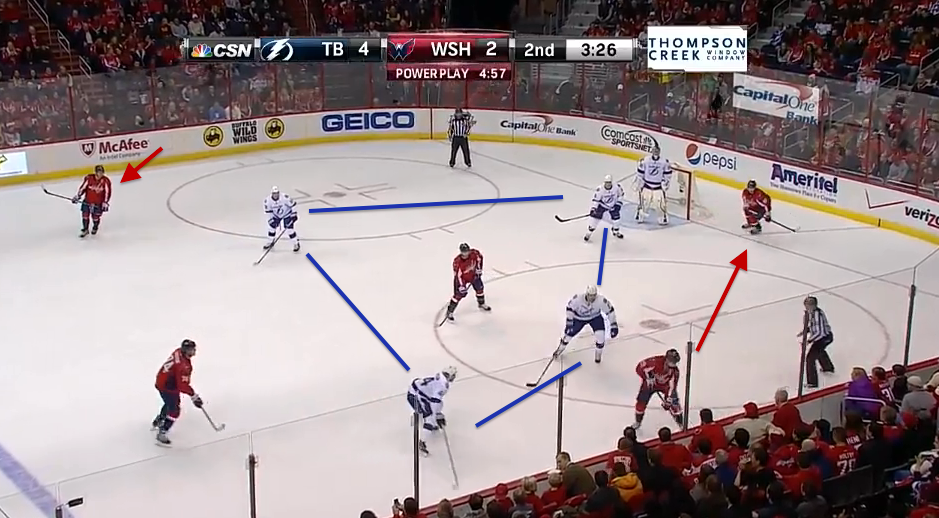 But an extra pass down to the goal line spreads out the play. Ovechkin's defender is still right on him, and closer to the goal, but as soon as the puck makes its way down, Ovechkin makes a beeline for the crease, recognizing the space. 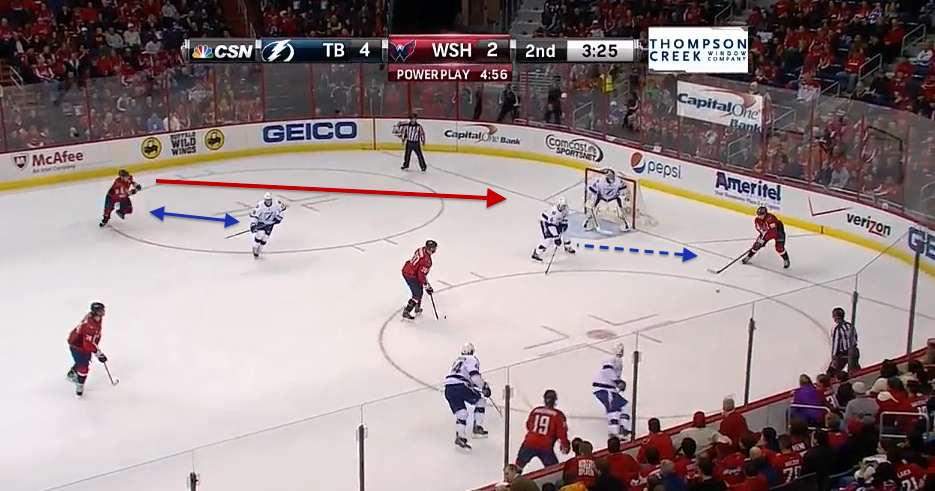 This second goal is eerily similar to the first, although the Islanders do a good job of defending against the back-door pass before eventually giving it up.

The puck is again at the goal line, but a prone Islanders defender takes away the back-door look. So the Capitals push the puck back up and reset. 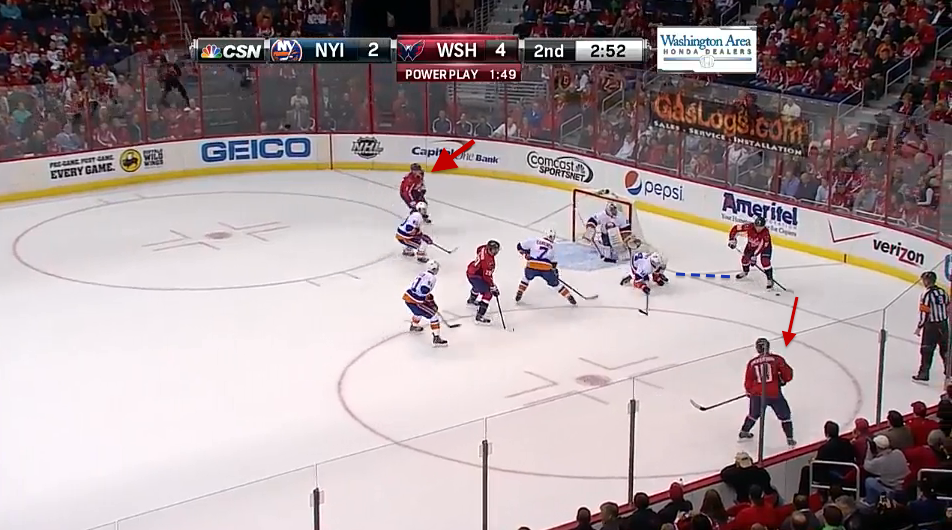 Ovechkin is out of the frame here (he does a great job kind of getting "lost" in plays by just drifting and floating). There's still no back-door pass available, but the Capitals do a great job of repositioning the Islanders power play by moving the puck away from the goal. 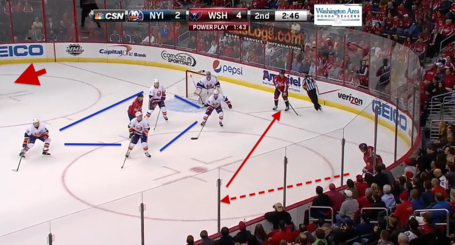 Now the puck will make its way back to Cap operating at the edge of the trapezoid (Marcus Johansson), and Ovechkin is already breaking to his spot. 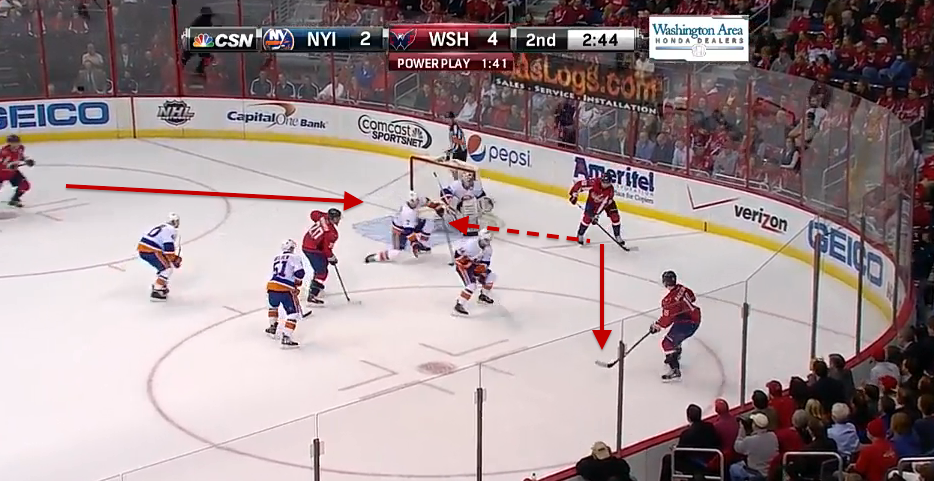 The Capitals have a few different spots they start Ovechkin from on offensive zone draws. On this goal, he's right at the edge of the circle.

Ovechkin is situated in a prime spot to shoot, but three Lightning defenders are right in his lane, and there doesn't appear to be much of an opportunity. 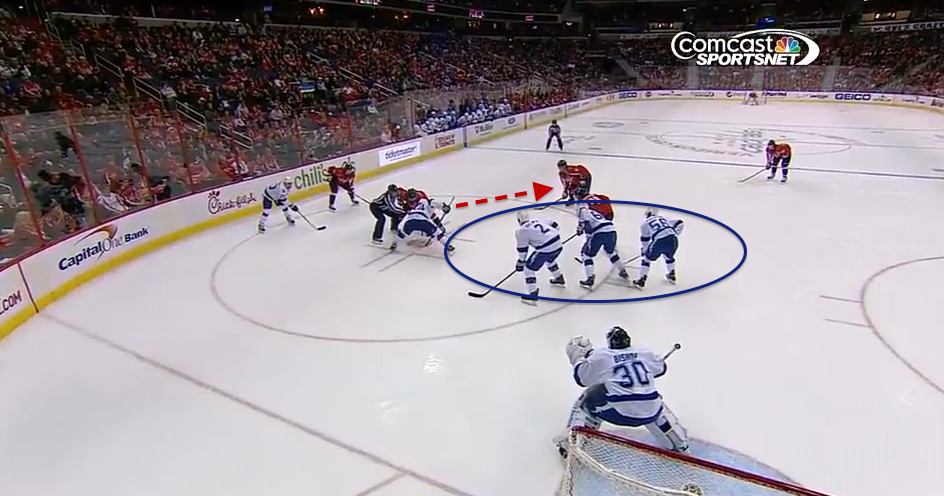 On the reverse angle, it's much of the same. Ovechkin is in a shooting position before the puck is dropped, but there's not a whole lot of room to shoot through. 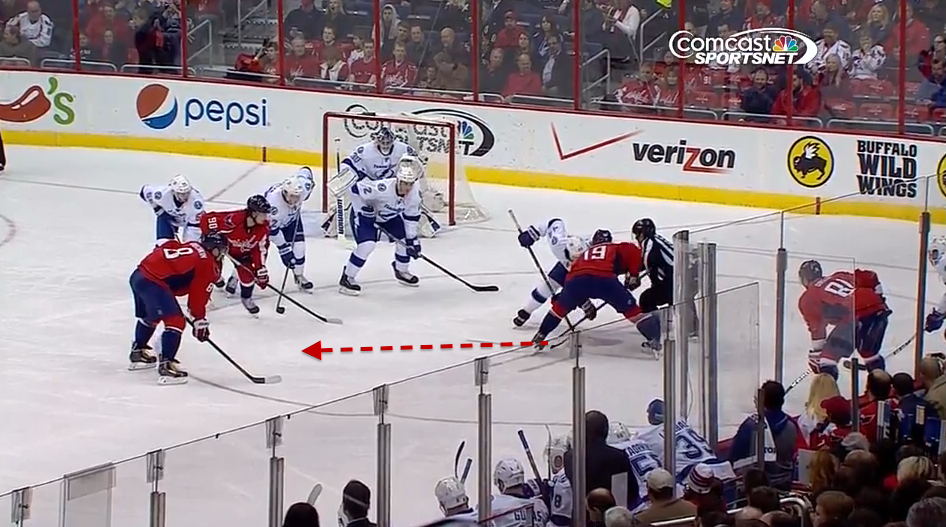 At the same time, Ben Bishop doesn't have a clear view of a shot from that spot on the ice. And Ovechkin, who is supremely talented above all else, shoots the puck through the defenders legs, completely screening out Bishop and giving him no chance. 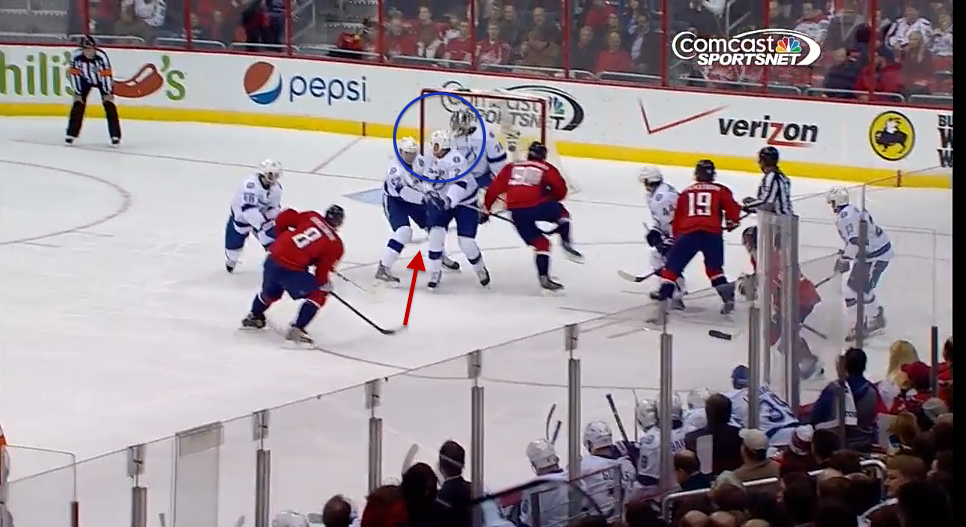 On this play, Ovechkin starts deeper in the zone. This means he has more time and space to operate, which he'll take advantage of.

There's a lot of distance between Ovechkin and the faceoff dot. Also, because the draw is on the left side of the ice, it's a much worse angle to shoot from, even for a right-handed shooter. 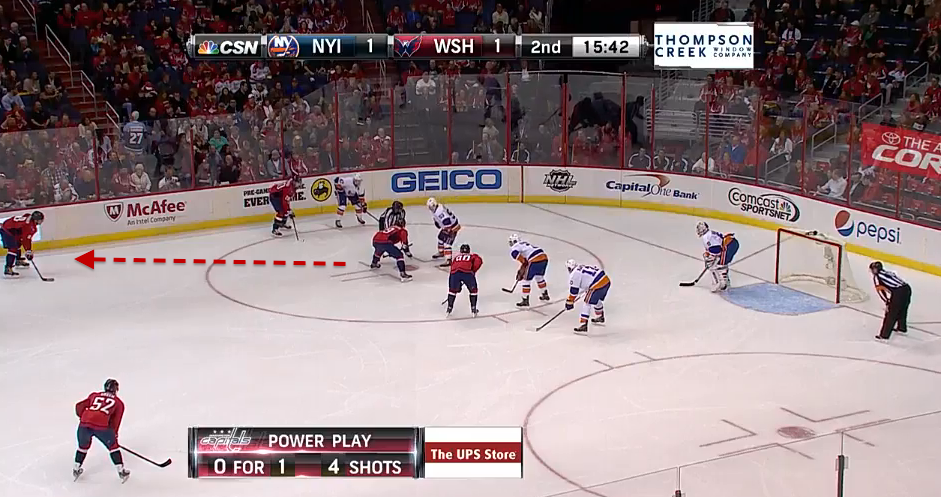 But Ovechkin takes advantage of the extra space. He walks the puck toward the middle of the ice, and knows he has time to make his way in from the blue line. 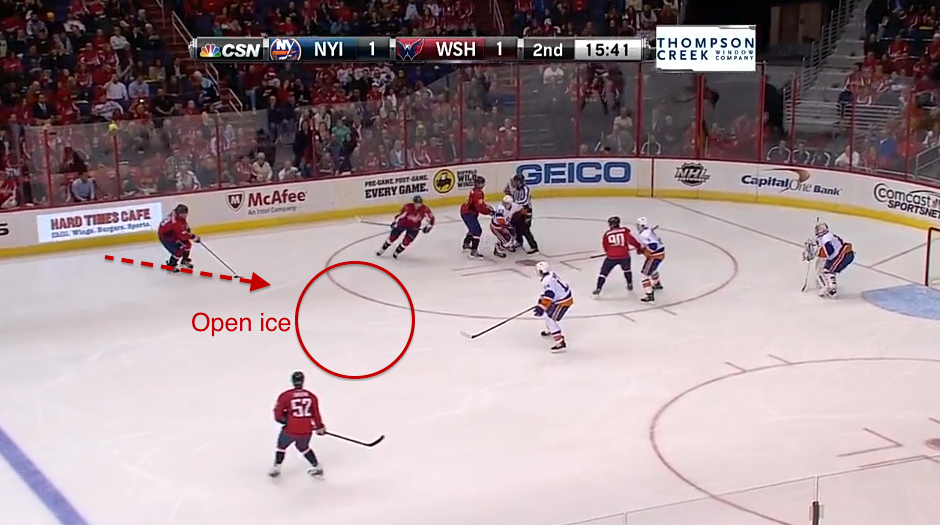 In only one season of his NHL career did Ovechkin not lead the league in shots. (It was also one of the seasons he failed to score 40 goals.) Ovechkin is a volume shooter, and it can be seen in his shooting percentage, which generally hovers around 13 or 14. But Ovechkin's willingness to shoot the puck nets him some goals from bad angles and unlikely spots on the ice.

Ovechkin actually begins this play in a good position to shoot, but the puck doesn't immediately make its way to him. He has good separation between himself and his defender, but Mike Green elects to simply go the other way. 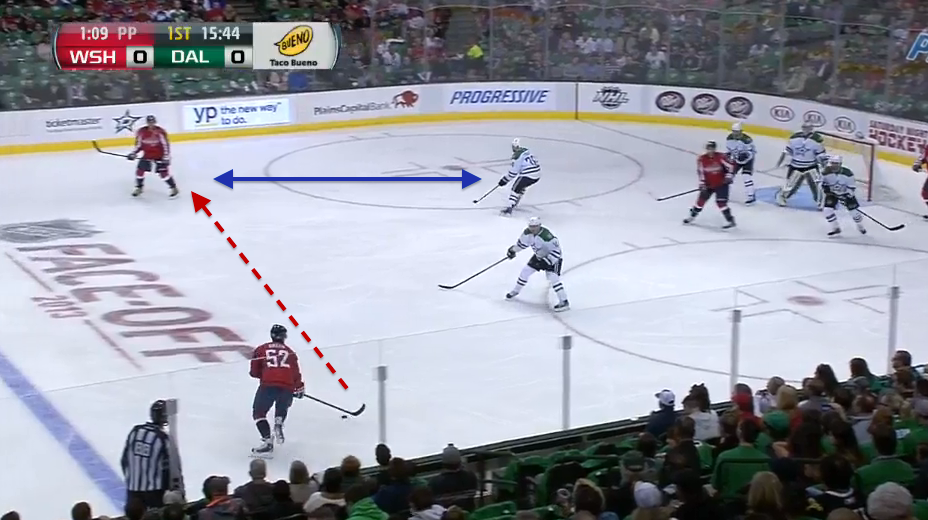 Green ends up back with the puck, and Ovechkin is now lower, down in the circle. Dallas' penalty killers are compact in front, and there's not much net for Ovechkin to target. But Green does have space to walk the puck toward the net. 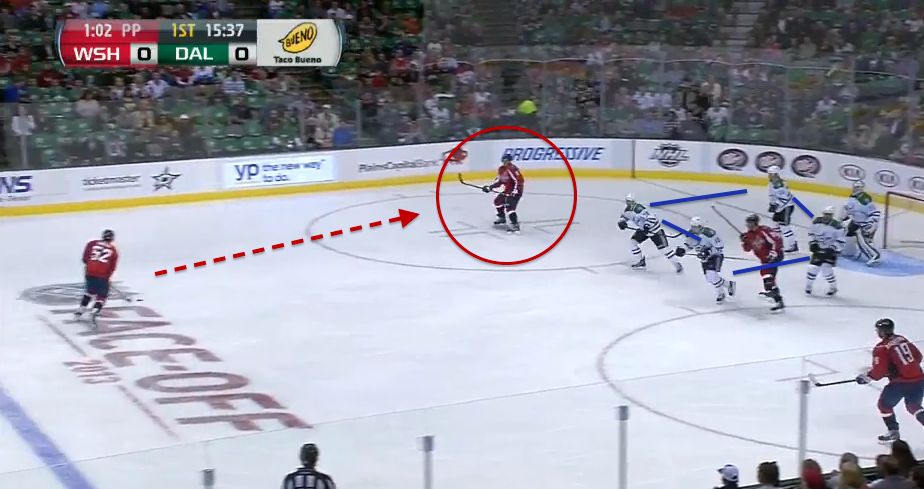 Green moves up, and Ovechkin skates into an even worse angle. There's still two Stars' defenders in front, and not much of an angle for Ovechkin, who still elects to shoot, and scores. 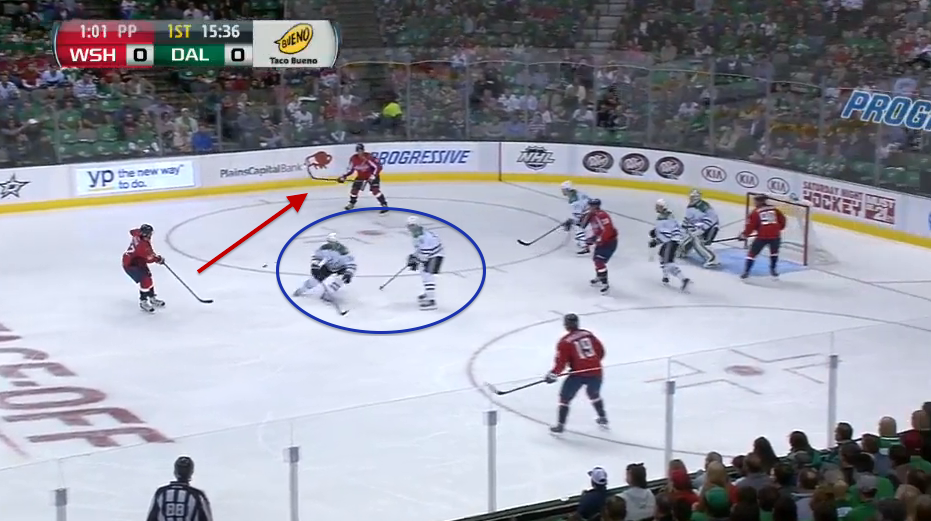 On this play, Ovechkin might be positioned at a better spot on the ice to shoot, but it's still not a great scoring chance.

The Capitals win a battle along the boards, and the puck will make its way back up to the point when the Lightning defender rotates down. Ovechkin is in the far circle. 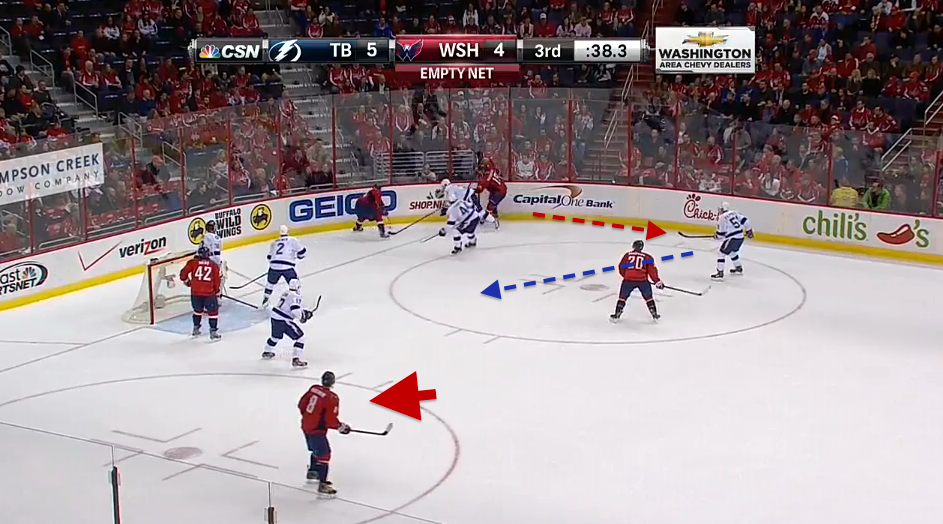 The cross-ice pass will make its way to Ovechkin, but there's a defender close enough to him to make a play. 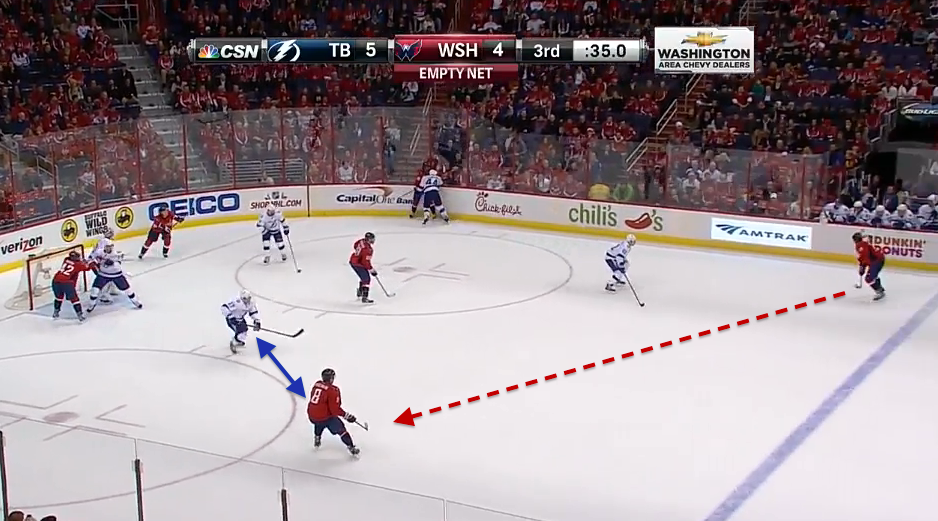 Ovechkin really doesn't care, and elects to just shoot the puck anyway, even without a shooting lane. Bishop has plenty of time to make a play on the puck, but again gets victimized by Ovechkin. 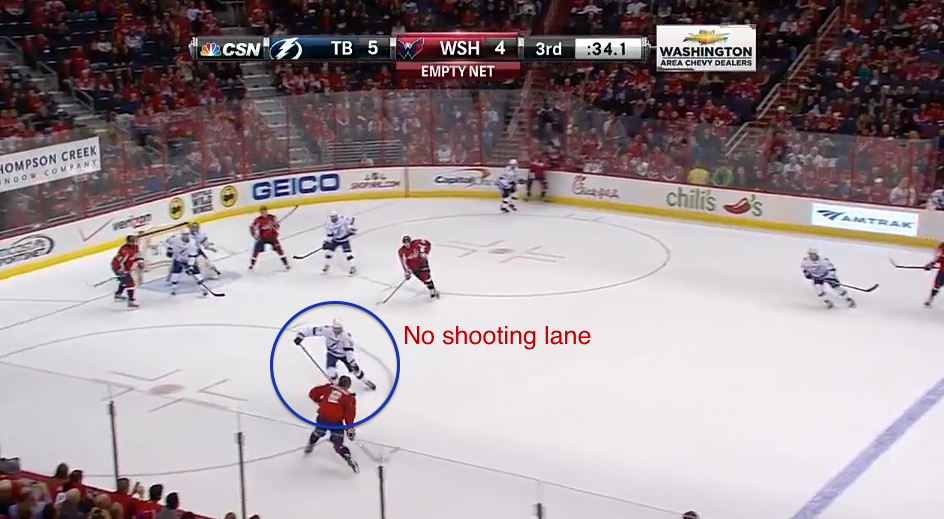 Ovechkin is the best goal-scorer on the planet, and is proving that again this season. He's getting back to doing things that put him in advantageous, dangerous positions on the ice. For the Capitals, that's good news, as Ovechkin scores the highest percentage of his team's goal in the league, and it's not close (24 percent, compared to the next closer player, Jeff Skinner, who scores 19 percent of the Hurricanes' goals). With a player of Ovechkin's caliber, it was only a matter of time before he began to once again put up big numbers.

For the other 29 teams in the league, that's bad news.

• Is Sidney Crosby "hard to play with"?

• Schenn gets sliced by skate, then scores game winner