The factors that drive the Kings' shot differential

The Kings have been a dominant puck possession team the last couple of years. How do they do it?

Share All sharing options for: The factors that drive the Kings' shot differential

The Kings have been an absolutely dominant possession team in recent years. Let's take a detailed look at how they've done it.

A team's shot attempt differential gives a good indication of how much they control play, how much time they spend on the attack in the offensive end, and how we should expect them to do in future games.

What these numbers don't tell us is why. They don't directly identify specific talents or system strengths; nothing on the NHL's stat sheet will really tell us that. So we've had to collect our own stats.

People have watched games and tracked zone entries, noting each time a team enters the offensive zone and whether they carry the puck in or dump it and chase after it. It turns out that zone entries are a major driver of shot differential at even strength.

Carrying the puck in generates more than twice as many shots as dump-and-chase, and some players are much better than others at creating the space needed to carry the puck in. It's one of our strongest measures of an individual's contribution to puck possession.

So we might expect that when we look at the Kings' numbers, we'll see a ton of carries, right? It turns out the answer is no.

The guys at Jewels from the Crown published numbers from the start of last year and the start of this year, and in both cases the Kings' carry-in rate was actually a bit below the league average (which hovers near 50 percent).

They were kind enough to send me their data -- I got 32 of last year's games from Robert_P., tracked a few myself, and got some help from Jessica Schmidt to finish off their season. For this year, I got 27 games from nickc79.

Overall in those 75 games, the Kings carried the puck in on just 44 percent of their entries, the same rate as their opponents. Carrying the puck in isn't what's driving their shot totals.

As much credit as the Kings get for banging along the boards and shaking pucks loose, that's not what's driving things either. Their opponents' 0.30 shots per dump-in is right near the league average, and the Kings' 0.32 is just a bit higher.

So where do the Kings' shots come from? There are four places where they generate an edge over their opponents:

Let's look at exactly how much impact each of these factors has and at how they come about.

Is that something we should expect to continue? There's mixed evidence on how repeatable a player's shots per entry are. If I had to guess, I'd guess that there are modest differences in talent that are largely swamped by random variance over tens of games.

But that assessment is based on comparing players on the same team. It's also possible that systems play a role when comparing across teams. One thing stands out at me in that regard.

Maybe that's just because their defensemen are unusually skilled with the puck. But how much better than average are they? Given that there isn't compelling evidence that top line forwards generate more shots per entry than enforcers, I'm hard-pressed to attribute this to a difference of skill.

It could be a bit of random variance, or maybe it's a system effect; maybe the Kings encourage their defensemen to gain the zone and quickly shoot the puck. If I were an opposing coach, that's something I'd watch for on video.

The extra shots per possession are a sizable chunk of the Kings' edge, but the majority of it comes from getting extra offensive zone possessions.

But the largest share of the Kings' shot differential -- an extra 240 shots -- comes from generating more possessions with their neutral zone play.

The Kings get 52.4 percent of the zone entries at 5-on-5. When the puck is in the neutral zone, the Kings are more likely than not to advance the puck into their offensive end. It's a difference of nearly 500 offensive zone possessions over this timespan.

So how do they get all those extra possessions?

Some teams might have to rely on banking the puck off the boards to clear the zone more than others, and might often see the other team regain possession of the puck and send it back into their end. The Kings have a great group of defensemen with a lot of puck skill; are they making crisp passes out of the defensive zone that set up the transition to offense?

Like with zone entries, we can track zone exits. Jessica tracked 20 games from last year's Kings team to help me look at what role their exits might have played in helping them push play forwards. Here's what we found at 5-on-5:

The numbers are similar, but there is a difference there; the Kings retained possession (via carry or pass) on 66 percent of their exits, compared to 63 percent for the opponents.

The difference is statistically significant -- with over 2,000 entries, the 3 percent difference is three times the standard deviation. But does it have practical significance? Does it mean anything?

The answer to that depends on how important an exit with possession is. How much more likely is it that play will shift to the other end of the ice if they start with a clean first pass?

With that information, we can calculate the impact of the Kings' zone exit advantage. For each 1,000 zone exits, we expect the Kings to successfully shift play to the other end of the ice 652 times, versus 644 for their opponents. That difference would lead to them getting 50.3 percent of the offensive zone possessions, a pretty minor sliver of their advantage.

Their zone exit possession numbers don't look any better this year, either. Pierce Cunneen has organized an effort to get people tracking zone exits for several teams, and the Kings' 58.5 percent possession rate is actually a sliver below the league average 59.5 percent.

Clean zone exits aren't the reason the Kings get more offensive zone possessions than their opponents.

Let's go back to those 20 games where we have both entry and exit data, and look at the end-to-end transitions. Here's a look at the frequency with which a team exiting their defensive zone shifts play to the other end of the rink so that they get the next zone entry:

We saw earlier that the Kings weren't a lot more likely than their opponents to retain possession on a zone exit, but they are a lot more likely to take those exits and bring the puck down to the other end of the ice -- especially on plays where they don't have the space needed to carry the puck out of the defensive zone.

The effect here is much larger than the effect of the zone exits; whereas the extra exits with possession produced roughly a 50.3-49.7 advantage in number of possessions, this zone shift factor by itself would produce a 52-48 edge.

So to sum up, here's how much of a boost to the Kings' shot differential appears to come from each of our factors: 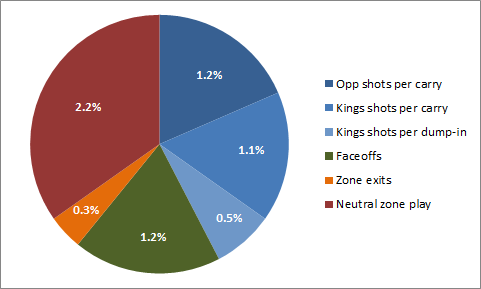 The Kings get significant contributions from preventing shots when their opponent carries the puck in and from generating shots on their own carries, especially the ones by their defensemen.

But the largest chunk of their possession advantage comes from simply winning the neutral zone, and if someone wants to break down their system, that's where I'd start.

• Alex the Great: How Ovechkin is scoring so many goals