The Russians appeared to go up 3-2 in their game against the United States, but the goal didn't count. Why?

A long shot from Fedor Tyutin beat a scrambling Jonathan Quick late in the third period between Russia and the United States on Saturday, but after a review, the goal didn't count.

Why not? During the shift on an earlier shot, Quick exploded to his left laterally in order to make a save on a Russian shot, and his skate hit the post and jarred it out of the moorings. You can see the that the net is off as the puck beats Quick here: 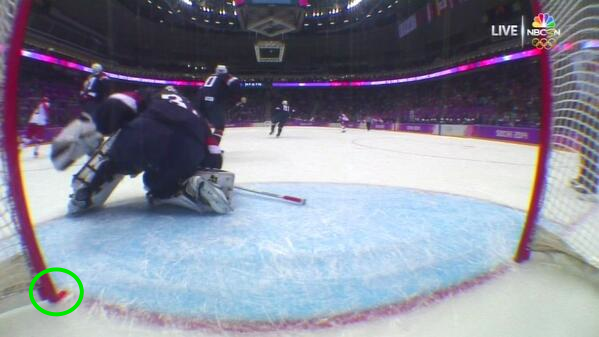 As you can see inside the green circle, the piece of the post that goes into the hole in the ice that holds the net in place is horizontal long the ice, meaning the net is off.

The net being off didn't prevent Quick from stopping the puck, and in fact it actually gave the shooter a worse angle, so the goal itself wasn't impacted by the net being off, but the rules are the rules, and here's what they are in the IIHF:

471 - DISALLOWING A GOAL
a) No goal shall be allowed:
1. If an attacking player deliberately kicks, throws or bats with the hands or otherwise
directs the puck by any means other than his stick into the goal net even if the puck
has been further deflected by any player, goalkeeper or official,

2. If an attacking player contacted the puck with the stick above the cross bar,

3. If the puck has been directly deflected into the goal net off an official,

Point 5 is the pertinent part. If the integrity of the net is altered at all, it's no goal. Good luck for Team USA.