T.J. Oshie's shootout prowess has been well-documented. The St. Louis Blues forward leads the NHL in shootout goals this season, and his 54 percent career mark is third-highest among active players.

It's something that Dan Bylsma and the rest of the USA brass took note of in the player selection process, and like Russ Tyler did for coach Gordon Bombay in the Junior Goodwill Games, Oshie delivered when called upon ... and called upon, and called upon again.

Let's take a look at what made Oshie so successful in the shootout Saturday against Russia. Here's his game-winning tally:

It's important to note that Oshie went four for six in the entire shootout, and kept scoring on basically the same move, or a slight deviation of that move. 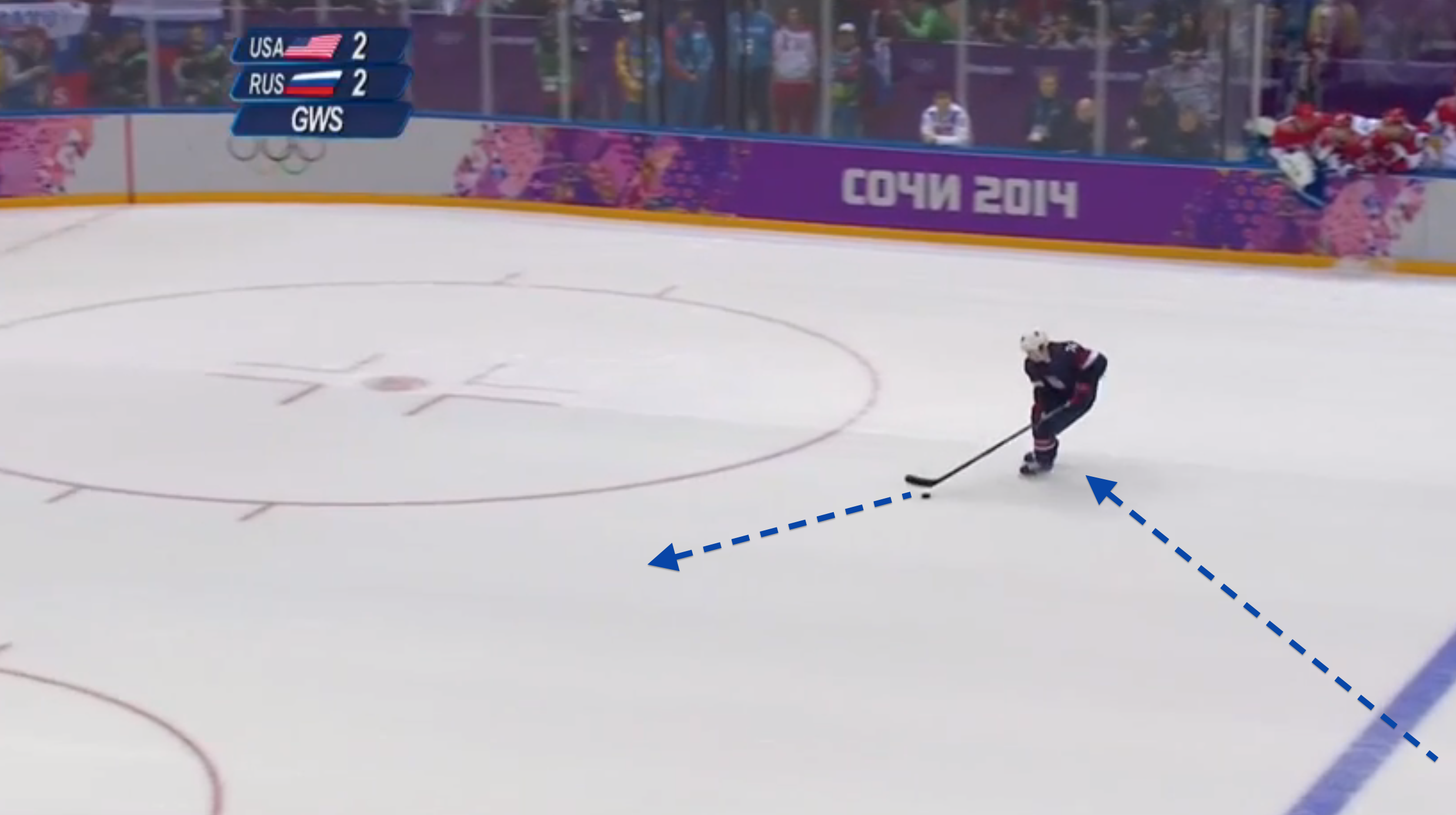 This frame is from Oshie's first goal of the shootout, way back in the very first round. His move starts by going wide, and then coming back in -- an important wrinkle to the overall set up. 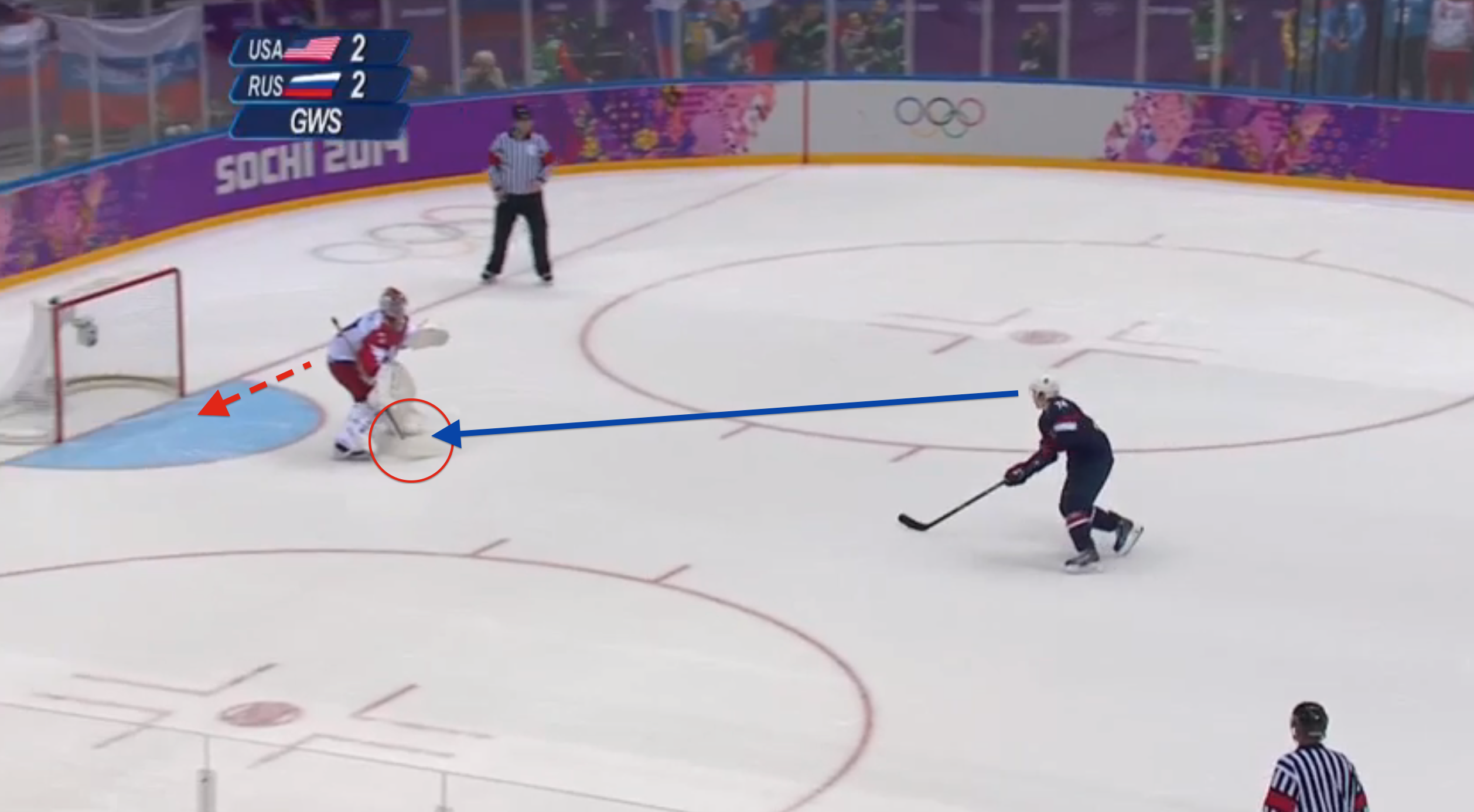 By changing the angle on his approach, Oshie forces Russian goalie Sergei Bobrovsky off his line, and is going to make him drift back into his crease as Oshie hits the faceoff circles.

The entire time, Oshie knows exactly where he wants to put the puck. With his quick hands, he's able to beat Bobrovsky between the legs as the goalie is still settling into his position in the middle of the crease. 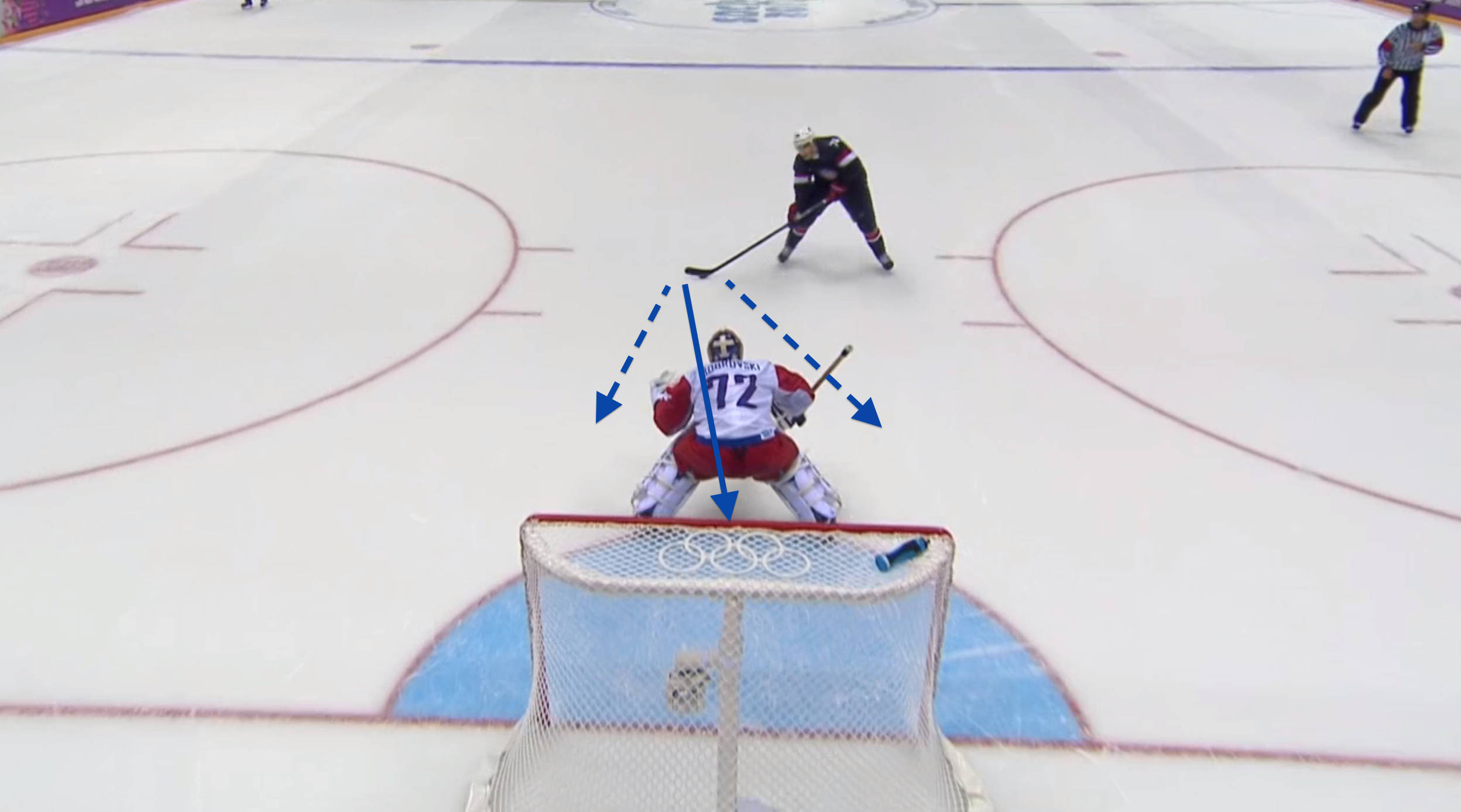 Here, we have a look at the approach on Oshie's third shootout goal, the only one he didn't attempt to go five-hole.

But what's important here is what he's previously established: Bobrovsky thinks Oshie is going to shoot five-hole, and plays the attempt to stop that move. Oshie can therefore shift left or right to open up a lot of space. 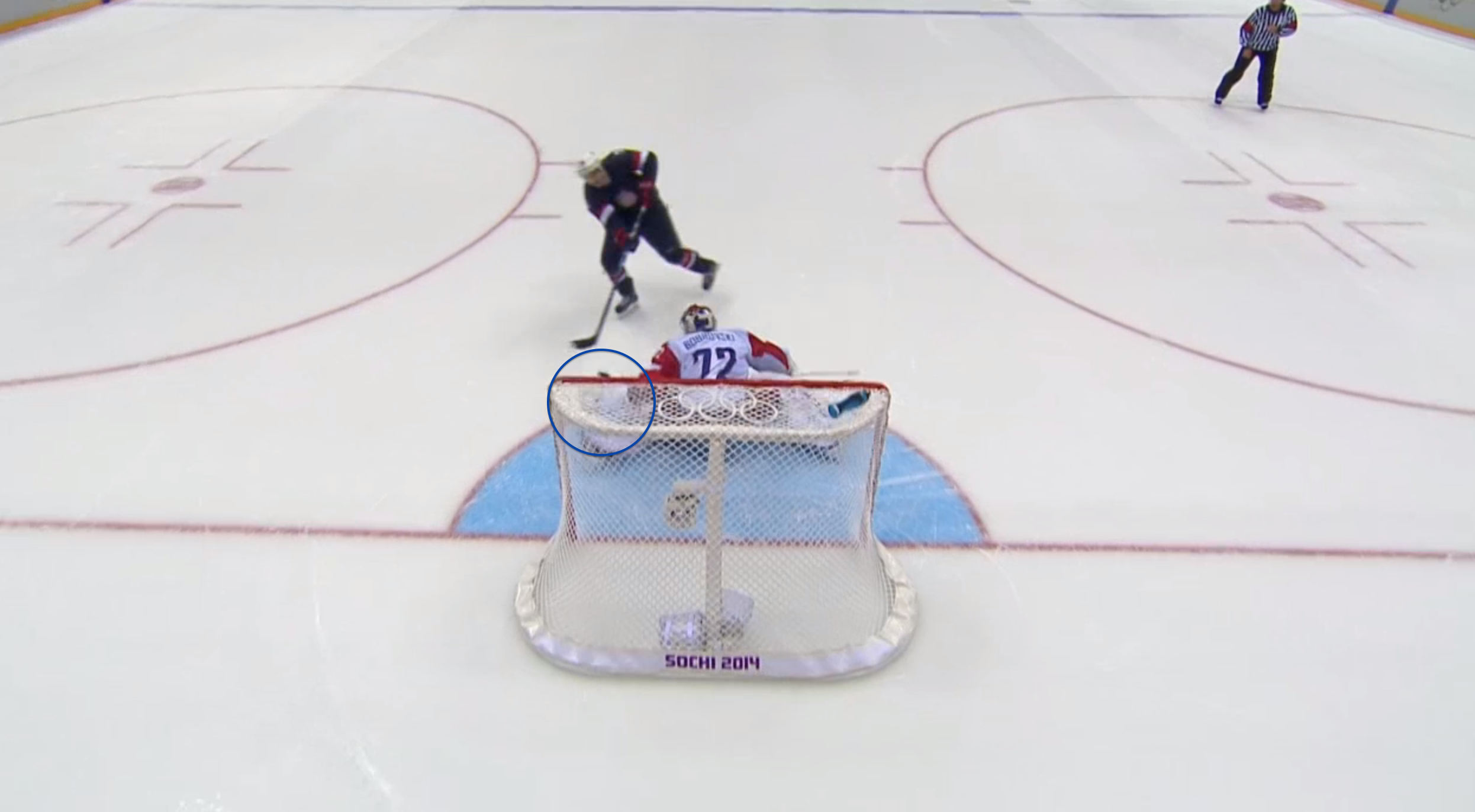 Bobrovsky gets down to protect the lower part of the net, and the space between his wickets, and as soon as the goalie makes that first move, Oshie goes to the right and has a lot of open net to shoot at. 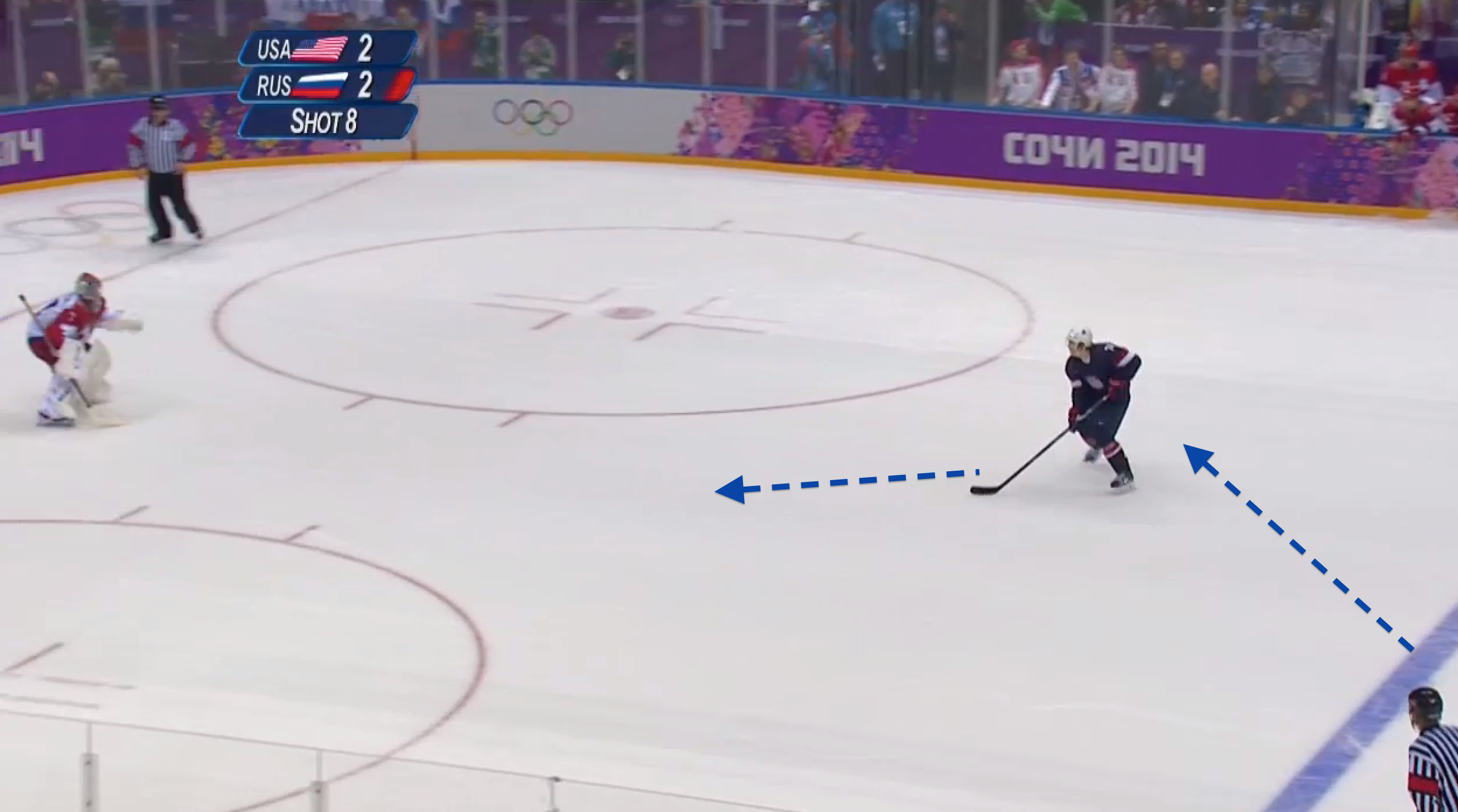 Oshie went back to his bread-and-butter in the eighth round to send the Russians packing. It's a similar start, with the wide carry and then a shift to the middle of the ice after he hits the blue line. 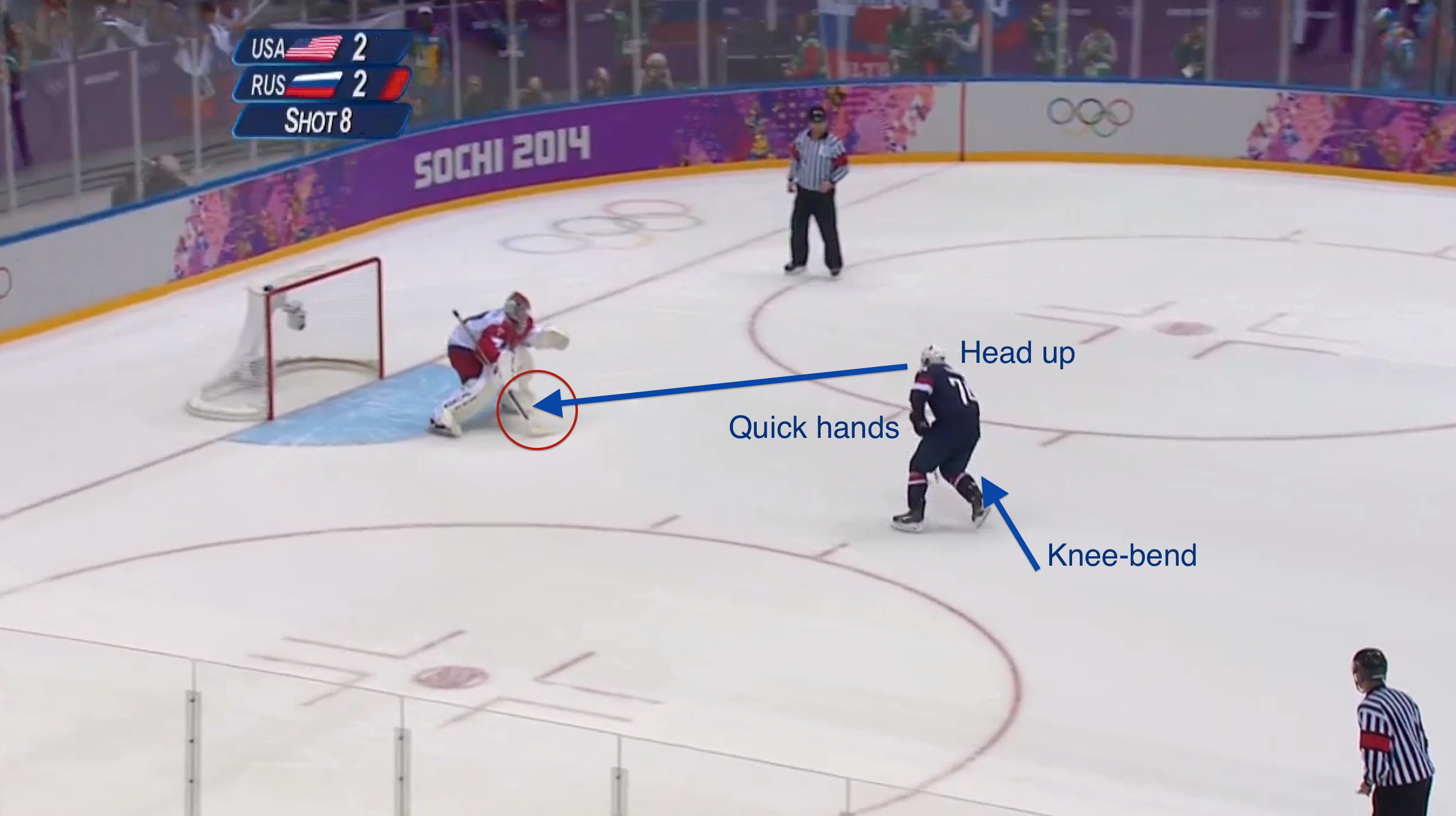 Oshie doesn't do a lot to give away he's going to shoot the puck. You can see the slight bend in his knee that helps him get his lower body into the shot. His head is always up, and he knows there's space between Bobrovsky's pads. And Oshie's quick hands allow him to get the shot off while there's still the space to go five-hole.