Winter Olympics hockey schedule: Matchups, seeding and game info for the playoff round

With pool play finished, the qualification and quarterfinal rounds are set for the men's hockey tournament.

Share All sharing options for: Winter Olympics hockey schedule: Matchups, seeding and game info for the playoff round

With pool play completed, the qualification round and quarterfinal round matchups are all set for the men's playoff tournament. Below are the first games that will take place on Tuesday -- while the game time's themselves won't be released until Monday -- and who those teams will go on to face.

After dropping a shootout loss to the United States, and then needing a shootout to beat Slovakia, the host Russians enter the qualification round as the highest seeded team playing a Tuesday game. They'll take on Norway, one of two teams that did not earn a point during pool play.

It was a palindromic three games for Switzerland, as they bookended a 1-0 loss with two 1-0 wins. They'll face Latvia, the other team to not earn a point throughout pool play, but a team that also played Switzerland scoreless for nearly 60 minutes.

One of the more intriguing qualification games on the schedule. These two teams don't like each other, and also began to find their footing later in pool play. Slovakia is coming off a good performance in a loss to Russia, while the Czech Republic was just shut out 1-0 by Switzerland, but is getting better goaltending from Ondrej Pavelec. 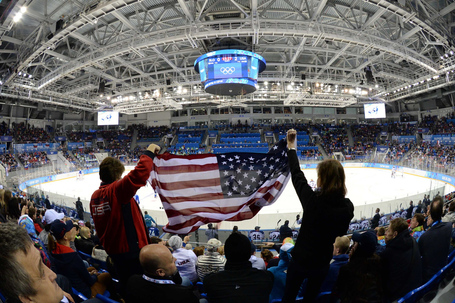 The winner will face... (2) United States

The Slovenians got a scare in their finale when Anze Kopitar left early, but he's reportedly set to go as Slovenia continues in its first Olympic hokey tournament. They'll go up against an Austrian team that has the Games' leading goal scorer, Michael Grabner, and some other NHLers.

Some interesting notes: With Canada needing overtime to beat Finland, and unable to clinch the top seed in Group B, the Canadians and Americans could face off in a semifinal matchup. The two teams played for gold in the 2010 games in Vancouver. Russia, by finishing fifth, will actually avoid both the United States and Canada in the quarterfinals if they do defeat Norway, and would instead face Finland.