Ice, ice, baby: What to expect on the bigger Olympic hockey rink

The Olympics may be filled with NHL players, but the Games will be played on an IIHF ice surface. How will it impact the game?

Share All sharing options for: Ice, ice, baby: What to expect on the bigger Olympic hockey rink

Snubs were inevitable, but some of the players who were omitted from 2014 Winter Olympic hockey rosters were more glaring than others. The most jarring of all from an American perspective may have been Bobby Ryan, a consistent goal scorer who has four times reached the 30-goal plateau, and has been a member of USA Olympic and World Championship teams.

Passing over Ryan was made out to be a tactical, play-to-the-conditions decision. When Ryan was a member of the last USA Olympic team that silvered in Canada, the rink was NHL-sized, and not an IIHF-regulated rink. The player selected for this tournament over Ryan, Blake Wheeler, was made out to be a better fit for the conditions that Sochi will bring.

But what exactly are the differences when playing on an NHL-sized rink, and the larger, international ice surface?

Although it's been a while since we've seen Olympic teams compete on that size sheet (eight years, to be exact), we do get a look at it every year in various international tournaments, perhaps most notably the World Junior Championship.

Below, we'll break down some of the key elements of playing on a bigger ice surface, and some things to look for in the upcoming Olympic tournament. 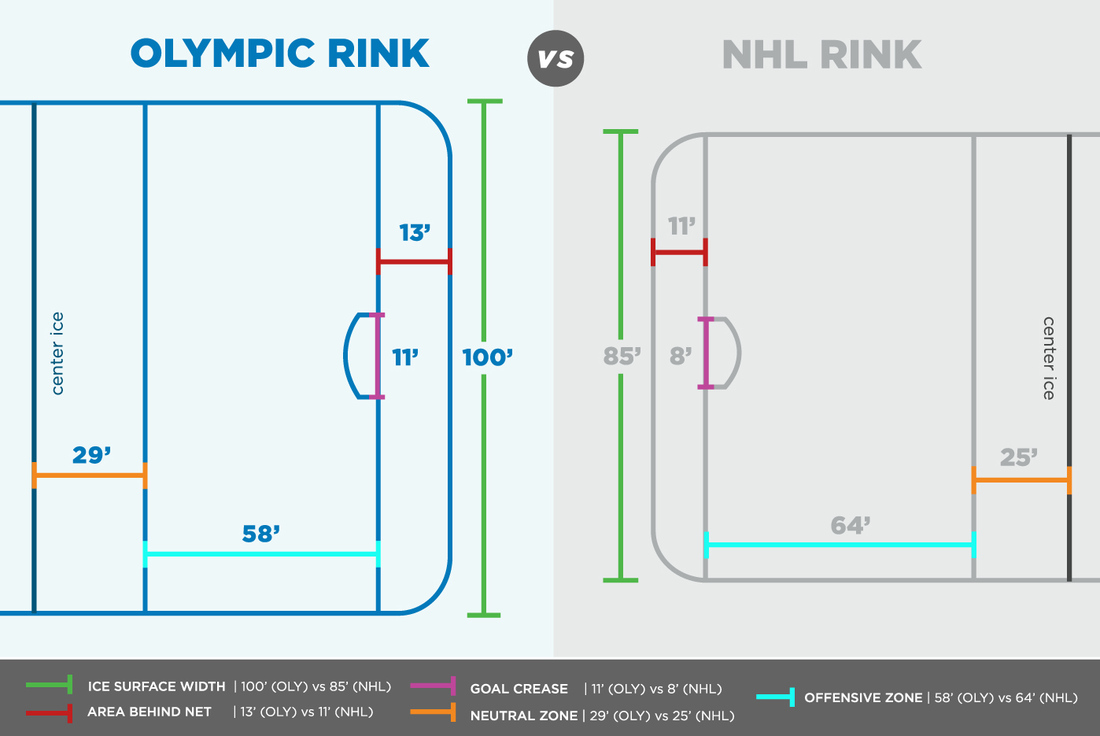 International rinks are roughly 15 feet wider than those used in the NHL. Any good rush up the ice can take advantage of a rink's width, and when playing on an IIHF surface, it's true more than ever.

"For a goalie, the biggest thing is the angles are a little different when the rink is bigger," said Henrik Lundqvist in an interview with SB Nation. "The players get more time because they're not as in close as they are over here."

Let's look at an example of that from the 2013 WJC gold medal game.

This play starts with a bad turnover by the Swedes in the offensive zone.

Turning the puck over on a larger ice surface can create problems when trying to recover, so when you've got the puck deep, it's especially important to make plays that won't lead to quick counters. Sweden did not do that on this play. 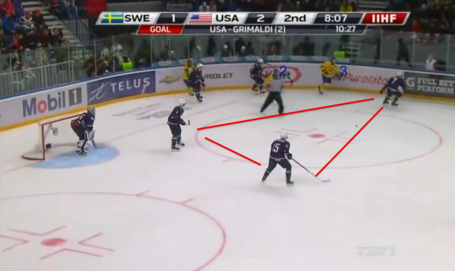 The United States breaks out here and rushes up ice 3-on-2, and their spacing is very wide -- the fundamental works well on an NHL rink, but is even more critical on an Olympic-sized rink. 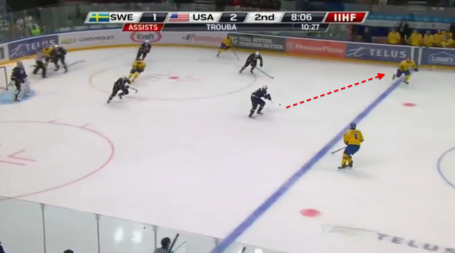 Team USA hits the line still up a man, and Sweden is having trouble matching its width. Both Swedish defensemen stick with the attacking player crashing the net front, while Riley Barber skates down the lane unopposed. 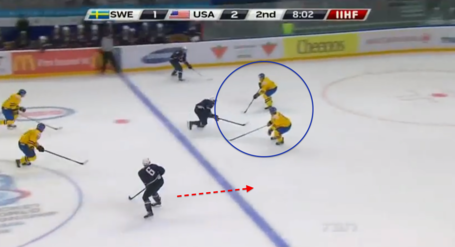 Barber ends up using the width of the ice to his advantage, and with both defenders falling to the same attacker, there's a clear passing lane and a quality scoring chance waiting cross-ice for Barber. 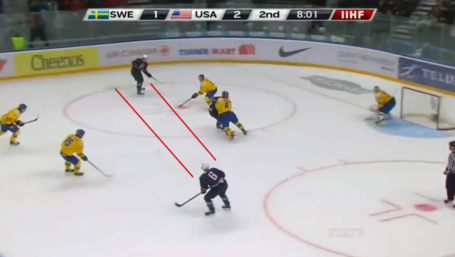 Zone exits need to be crisper

Softer passes near the blue line are more likely to be intercepted, because in many cases, they have longer to travel than usual. Here's another example from that 2013 WJC gold medal game:

After Sweden makes its first pass to get out of the zone, everything looks relatively clear. There are a number of escape valves, and there's plenty of space to get the puck out to center ice. 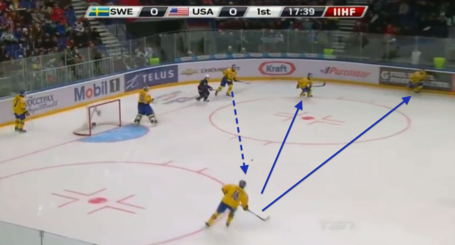 But that initial pass is too soft, and with the extra ice the Americans have more time and space to forecheck. You can see the space between the puck carrier and the blue line, and how quickly the forechecker was able to apply pressure. 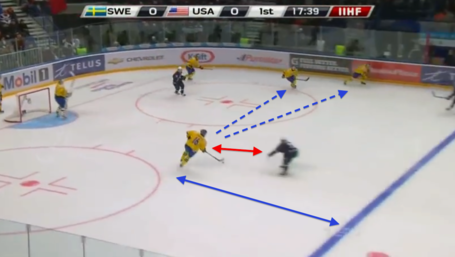 The biggest problem with this kind of play is how stretched teams become in transition on bigger ice, and how that amplifies the impact of the turnover.

Both players on the half-wall get caught trying to break out. A third player was already out of the zone, and the puck carrier ends up being the fourth player behind the puck. That easy D-to-D pass in the zone needs to be crisp and on the tape, or it can all come unraveled. 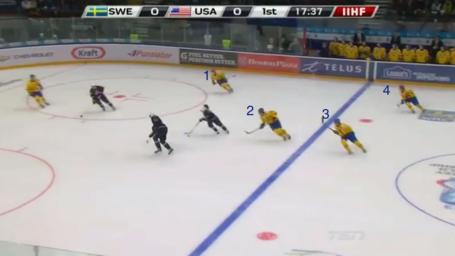 Speed is effective, especially in transition

This point gets back to why many believe the United States took Wheeler over Ryan. On a larger sheet of ice, the consensus is that players able to push the pace are more successful.

This play begins with Sweden harmlessly dumping it into the United States' zone. While Sweden loses possession, the team still has the Americans pinned deep, with the puck carrier sealed on the half-wall, and there doesn't appear to be any threat developing. 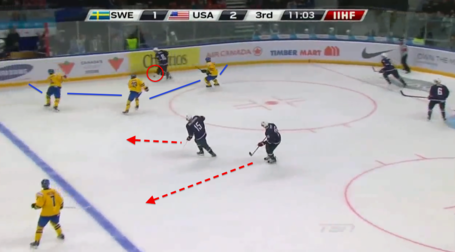 J.T. Miller gets possession for the United States, and three Swedish players get in on the forecheck. It's also probably worth noting the circumstance: a one-goal Swedish deficit with 11 minutes to go in a gold medal game. Sweden is trying to force the effort, but even still, looks to be in decent position.

Miller has the ability to make a play up the wall and send the puck into an area for the speedy Alex Galchenyuk. 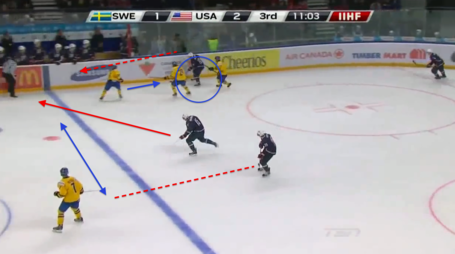 With Jimmy Vesey alongside Galchenyuk, the two can break in for an easy 2-on-1, with the play started by Miller taking advantage of Galchenyuk's speed on the big ice surface. 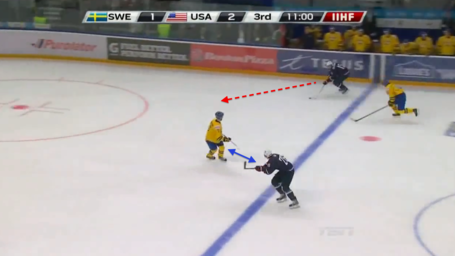 There's no secret that a lot of what translates well on bigger ice are elements of the game that work well on an NHL-sized rink. With more space to operate, however, some of those wrinkles become even more effective, and more of a point of emphasis.

"In Vancouver, we played on a small rink," said Lundqvist. "In Torino, we played on a big rink. It is a little different, and it's something you have to get used to the first couple of days of practice, and maybe the first game or so. But then I don't think you think too much about it."

• The Ratchet Olympics | "We need to be tough!"

• Get to know Sochi's 11 Olympic venues