Marian Hossa still has great hands around the net

Marian Hossa may be 35 years old but he still plays like he's 25.

Share All sharing options for: Marian Hossa still has great hands around the net

Marian Hossa may have just turned 35 last month, but you would never know it watching him play. He's still one of the best players in the league and can be downright unstoppable when you give him any sort of space around the net to make a play.

That's what the Anaheim Ducks did in the second period on Wednesday night and it ended up costing them the first goal of the game. Hossa made a nifty play coming down the slot, then beat Jonas Hiller from a crazy angle right along the goal line.

Along with the shot, just look at what that play did to Ducks defenseman Cam Fowler. He never had a chance.

Hossa's reaction summed up the play quite well. 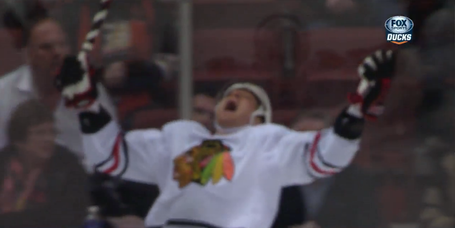