Even though the league is trying to make it less common, the shootout is here to stay. And as much as we want to believe winning is a repeatable skill, it mostly just comes down to luck.

Share All sharing options for: The luck of the shootout

Eight years ago, the idea of a shootout was supposed to be a big selling point for the NHL to make games more exciting for fans. It was not only going to show off the individual skill of the best players in the league, but also eliminate tie games and give every game a winner and a loser.

If you're dropping a couple hundred bucks to go watch the Blackhawks and Blues on a Saturday night you might want to walk out of the building knowing that somebody won and somebody lost. You want to know those two-and-a-half hours and significant chunk of your weekly paycheck resulted in something to give you the idea that one team was better than the other.

Trouble is, the NHL has now apparently decided that too many games are being decided by shootouts. A significant portion of the general managers' meetings in Florida this week were focused on how more games can end in overtime. This is happening just a couple of years after the league changed its tie-breaking procedure in the standings to not count shootout wins. Ideas have ranged from three-on-three overtime, to longer overtime, to simply changing what direction teams skate in during the extra period to create a longer line change and open the door for teams to make mistakes that could result in goals.

The NHL & the 3-point system

Word out of the GM meetings is league managers aren't happy with the amount of games being decided by the shootout. Maybe implementing a three-point standing system would help with that problem.

The NHL & the 3-point system

No matter what the league does, a good number of games -- and maybe even the occasional playoff spot -- every year are going to be decided by the shootout unless it is eliminated.

Because of that, there is going to be at least some attention paid to it by teams when it comes to selecting players and trying to win games. Maybe if all other things are equal between two players, you might take the guy that you think could get you an extra point or two because of his shootout skills.

After all, it's not entirely wrong to say that some players are better at it than others. Vancouver's Henrik and Daniel Sedin, for example, have notoriously struggled throughout their careers in the shootout (combined 4-for-29). Meanwhile, a player like Matt Hendricks -- a fourth-liner with 31 career goals in more than 320 games -- is better than 50 percent for his career (9-for-17). Heck, T.J. Oshie's success in the shootout was apparently one of the reasons he made the United States Olympic team, and it even paid off in the preliminary round when he scored four goals in a shootout against Russia. For the Americans, it was the highlight of the tournament.

Outnumbered: Is NHL analysis any good?

The thing is, there hasn't been much evidence since the shootout was added to the NHL to suggest that it's something that can be repeated every year on a team level or an individual level. Just because a team or player is good in the shootout one year doesn't mean they're going to be good at the next.

For example, the table below shows all 30 teams and their year-to-year win percentage in the shootout. It's a jumbled mess. 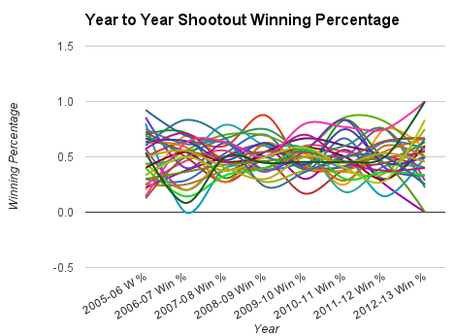 There doesn't appear to be any rhyme or reason as to why teams, good or bad and skilled or unskilled, fluctuate so wildly from year to year outside of luck and random chance. And some of the changes are drastic.

In 2005-06 Carolina won eight of its first 10 shootouts. It went 0-5 the next year becoming the only team to go an entire 82-game season without winning a single shootout. The Hurricanes managed this while using mostly the same players.

The 2006-07 Washington Capitals won just one of their 12 shootouts. They went 7-6 in the previous year and 4-4 the following year.

Gold in the Mud

Gold in the Mud

While many in the analytics community have been waiting for the Toronto Maple Leafs' style of play to catch up to them, they appear to be on their way to the playoffs for a second straight year despite being badly outshot nearly every night. The thing is, the Leafs actually have regressed to the point that they've been outscored this season (their minus-7 goal differential as of Wednesday is the worst of any team currently in a playoff spot).

What's keeping them in it? A 9-4 record in the shootout. This after the team went 0-5 last season during the lockout shortened season, scoring only three shootout goals all year (all of them from Tyler Bozak).

Their shootout success this season has been built on Joffrey Lupul and James van Riemsdyk going a combined 12-for-17. Before this season the two of them were a combined 6-for-23 in their career. And that brings us to the year-to-year performances of individual players.

We know shooting percentages during game-action regress all the time. It happens in the shootout, too, even for the best and most skilled players. The chart below features 13 players, the top-10 active goal-scorers in the shootout (Brad Boyes, Zach Parise, Pavel Datsyuk, Radim Vrbata, Jonathan Toews, Jussi Jokinen, Mikko Koivu, Frans Nielsen, Patrick Kane and Anze Kopitar) as well as three other notable players (Sidney Crosby and Alex Ovechkin -- two of the best and most skilled offensive players in the world -- and shootout specialist T.J. Oshie).

Try to find some consistency in there. From anybody. 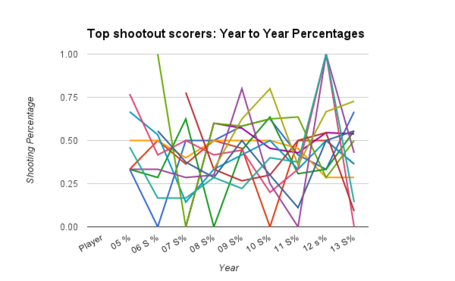 Patrick Kane is one of the best shootout performers in the NHL since he entered the league and has scored on just one of his 11 attempts this season. Did he suddenly forget how to do it? Did goalies finally figure him out? Maybe. Or maybe it's just a cold streak.

This is an admittedly small list of players, but if this happens for the best players in the shootout and the most skilled players in the world, it probably isn't a good thing for your average NHLer.

Yes, there are certain players you always want to put out there if you're a coach. If you're Joel Quenneville, Jonathan Toews is always going to be one of your three. Same for Pavel Datsyuk in Detroit, T.J. Oshie in St. Louis, and Anze Kopitar in Los Angeles, just to name a few. But once you get past the top so many players? It may not make a difference if you have some sort of thought-out strategy or just randomly pick names out of a hat.