Is the Anaheim Ducks' recent slump a cause for concern?

The Anaheim Ducks haven't won as many games over the past couple of months. Is that just a minor slump or a sign of a much larger problem?

Share All sharing options for: Is the Anaheim Ducks' recent slump a cause for concern?

For two years now there's been quite the battle raging in the hockey community -- involving fans, media and even the teams themselves -- on the best way to evaluate and predict future performance.

The focus of this intense (and at times insufferable) argument is usually the Toronto Maple Leafs and their ability to win so many games despite the fact they get badly outshot and fall short in every objective measure that we feel best predicts how teams will perform. We keep waiting for the house of cards to collapse on itself, and for the most part, it never really does. While the argument mostly focuses on the Maple Leafs, there is another team in the NHL winning even more games in a similar way, while mostly avoiding the same attention under the analytical microscope -- the Anaheim Ducks, owners of the second best point total in the league entering Saturday.

Despite that success, there still seems to be something about this team that isn't quite right, and it's been really noticeable over the past two months.

Their 6-4 win over the Colorado Avalanche on Friday night snapped what had been a four-game losing streak, one that included an embarrassing 7-2 loss to the Calgary Flames earlier in the week. After starting the season 36-8-5 in their first 49 games, they've won just eight of their past 18 games.

Is that most recent stretch simply a slump, or the sign of a team that is maybe starting to trend in the wrong direction at the wrong time of the year. If you think back to last season, where the Ducks stormed out of the gate by winning 22 of their first 29 games before starting to fade down the stretch before losing in the opening round of the playoffs to a No. 7 seed, it might be more of the latter.

The Ducks should be a fascinating team for the same reason the Maple Leafs are. They have a couple of high-end players up front (Ryan Getzlaf and Corey Perry) that would be the envy of most teams across the league, and thanks to the combination of Jonas Hiller, Viktor Fasth (before his trade to Edmonton before this year's trade deadline) and Frederik Andersen they have received some pretty strong goaltender the past couple of years.

Together, that combination has been good enough to win a lot of hockey games (100 out of 162 to be exact) since the team hired Bruce Boudreau in the middle of the 2011-12 season.

But there's just something about this team that doesn't always add up.

Once you get past Getzlaf, Perry and the goaltending there isn't really anything about this team that jumps out. Their forward depth isn't all that impressive, and they just traded their fifth-leading goal-scorer at the trade deadline (Dustin Penner) and brought in nothing to replace him. Even the great Teemu Selanne seems to have finally started to slow down this season.

Defensively, they have a couple of young talents in Cam Fowler, Hampus Lindholm and Sami Vatenen, and Francois Beauchemin has long been underappreciated across the league, but again, is it really championship level depth when you have a guy like Ben Lovejoy playing top-four minutes on your blue line?

While teams like Chicago, Los Angeles, Boston and San Jose can look downright dominant at times, you never really see that sort of play from Anaheim. They win a lot, but it's not always as convincing as some of the other top teams.

At worst, this is a very good hockey team (top-10) that has a chance to do some damage if it catches the right matchups in the playoffs. But is it really as good as its place in the standings would have us believe, and does it really stack up with some of the NHL's other super powers (Chicago, Los Angeles, Boston, etc.)  as far as being a Stanley Cup favorite?

NHL teams win in a variety of ways and with any number of playing styles, but all teams that go deep into the playoffs and win the Stanley Cup, at least when it comes to recent history, have one thing in common -- they control the puck significantly more than their opponents.

Kings coach Darryl Sutter addressed this perfectly last week when talking about the modern-day NHL and the way teams win.

"The game’s changed. They think there’s defending in today’s game. Nah, it’s how much you have the puck. Teams that play around in their own zone (say) they’re defending but they’re generally getting scored on or taking face-offs and they need a goalie to stand on his head if that’s the way they play," said Sutter.

In other words, puck possession.

The best and easiest way we have to measure puck possession today is to simply go by shot attempt metrics, Corsi (all shot attempts -- goals, saves, blocks, misses) and Fenwick (all unblocked shot attempts), and when it comes to trying to predict team success FenClose (percentage of unblocked shot attempts a team gets when the score is close) is usually the way to go. It's a measure of possession, and by looking at situations when the game is close you're eliminating score effects and the changes teams make (whether by design or unintentional) when they're leading or trailing by multiple goals. A team ahead by two or three goals is probably going to give up more shots as it tries to protect its lead and other team tries to rally.

Currently, the Ducks are 16th in the NHL right at 50 percent. Last season, Anaheim was 20th at 48.3 percent. Between the two seasons combined, Anaheim is 20th in the NHL.

But what does that matter? They're still winning and when it comes to the standings are as good as any other team in the league this season (and last season). Well, it might matter, at least a little bit, when it comes to extended playoff success and winning championships.

Not only are the Ducks near the middle of the pack this season possession-wise, they've been trending in the wrong direction all year, as the chart below (via ExtraSkater) shows. 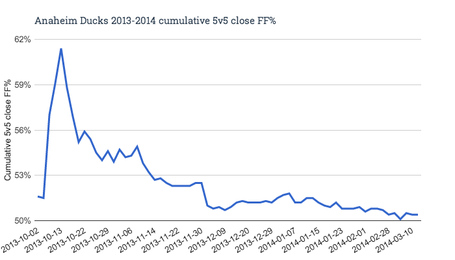 It's not the end-all and be-all when it comes to success. Some teams can control the puck but because they don't have great offensive talent aren't capable of finishing and capitalizing on it (See: New Jersey the past two years), while others are able to get by because they get exceptional goaltending or maybe have success in overtime or the shootout (Toronto).

As Habs Eyes On The Prize pointed out last year, it's usually a common denominator when it comes to winning and losing.

Anaheim is a good team, and is most certainly one of the top-10 in the league right now (and probably even a little higher). But when it comes to winning the Stanley Cup this season there seems to be at least a few teams ahead of them that are more built for a championship right now.