Which type of NHL forward ages most gracefully?

If you're looking to add offense via unrestricted free agency, which kind of forward is the best bet to age gracefully?

Share All sharing options for: Which type of NHL forward ages most gracefully?

Last Thursday, we kicked off a series on aging in the by looking at forwards' even strength scoring rates. We found that for the average NHL player, points per minute rise to a peak at age 24 and drop off steadily from there: 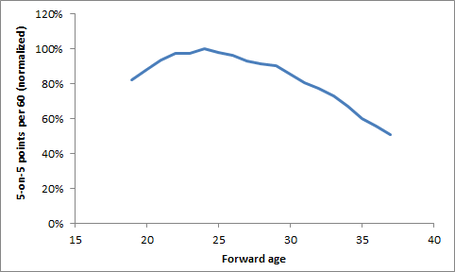 Not everyone will follow that path, of course. Some players age better than others, just because of their physiology or their luck with injuries. I wouldn't assume it's related to how good they are at their peak -- an elite player might be able to survive more years of decline and still be effective, but the skills that make them great aren't necessarily correlated to how their body ages.

But can't we still guess that some players will retain more of their skill than others? I've written before that power play scoring doesn't drop off as fast as even strength scoring, so we might expect someone who gets a significant chunk of their value from the power play would age relatively well.

And this makes sense to me. People lose burst and speed as they age, traits that are leaned on heavily at even strength. But their vision, hands, and hockey IQ probably last longer, and those skills -- while important in all scenarios -- likely play a bigger role in generating power play scoring.

By the time players reach unrestricted free agency, they are already into the downslope of their career. So let's see if we can tease out which of those players might be better gambles.

Here's a look at how forward 5-on-5 goal-scoring and assist rate evolve with age (as before, using this method): 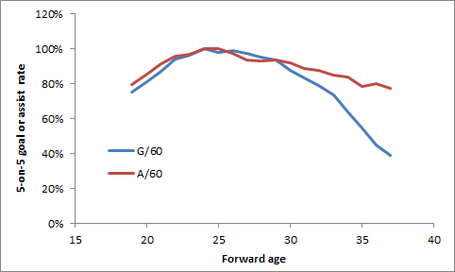 With that being said, the curve for overall assists looks bizarrely flat. Some of that is probably because secondary assists are largely random -- if a player's ability doesn't have much impact on how many secondary assists he gets, then aging won't markedly reduce his secondary assist rate.

When we look just at primary assists, we see a different story: 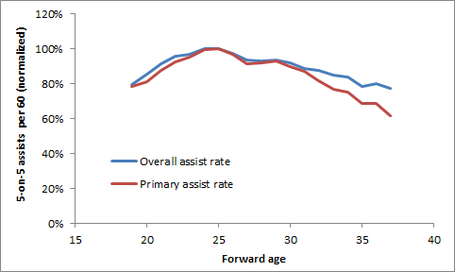 Primary assists do drop off more than secondary assists, but still considerably less rapidly than goals.

And we can break things down even further and look at what kind of goal-scoring persists with age. Do we expect more graceful aging from a player like Alex Ovechkin, who shoots a ton for a middling percentage, or from a sniper like Ilya Kovalchuk who has a middling shot rate (per minute) and elite shooting percentage? 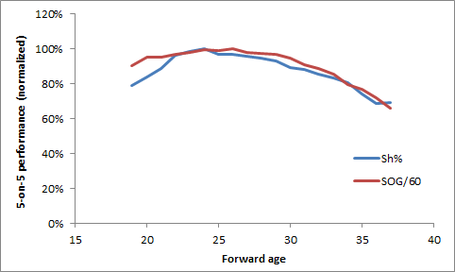 The biggest difference is actually at the beginning of the career, where shooting percentage appears to improve more sharply than shot rate. However, shot rate does seem to persist somewhat longer, with a broad peak centered at around age 26.

Overall, if you go shopping for offense in unrestricted free agency, a passer is a better bet for a multi-year contract than a scorer, and a shooter is a bit more reliable than a sniper. As always, these are population averages and your mileage may vary, but that'd be the starting point for my projections.