In part three of our series on player aging, we look at how shot attempt differential (Corsi) evolves as a player ages.

Share All sharing options for: How shot attempt differential changes with age

Recently we've looked at how forward point scoring rates evolve with age, and what types of players seem to hang on best. Point totals are just one piece of player evaluation, however; today we'll look at the typical career arc when it comes to a player's shot attempt differential, or Corsi.

As a reminder, Corsi is a measure of whether a team tends to get more shot attempts than their opponent; since you have to have the puck to take a shot, Corsi turns out to be very strongly correlated with puck possession. So if a team is outshooting their opponent whenever a certain player is on the ice, we can presume that he and his linemates are generally carrying the play.

Following the same method as before, let's look at how an average forward's Corsi evolves through his career: 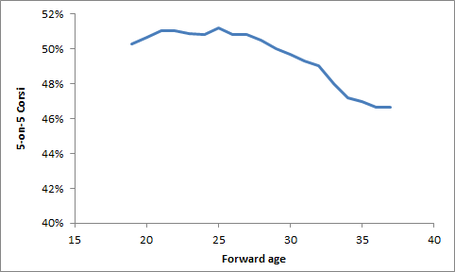 However, it's not easy to put the two measures on the same scale; with scoring, we just normalized to a player's peak, but it doesn't make much sense to talk about a player being at 90 percent of his peak Corsi. To dig into this, let's think of the two stats in terms of the player's league rank.

The average player peaks at a bit over 51 percent Corsi, which is something like 60th percentile among regulars. By age 34 or 35, he's dropped to around 47 percent, which would be about 20th percentile.

So it's fair to say that a forward's Corsi drops at about the same rate as his point-scoring does. (For those of you who were wondering, that's why I set the axis on the plot above to go all the way down to 40 percent so that it would be qualitatively comparable to the point-scoring plot in the previous articles.)

We can also look at how defenseman Corsi changes with age: 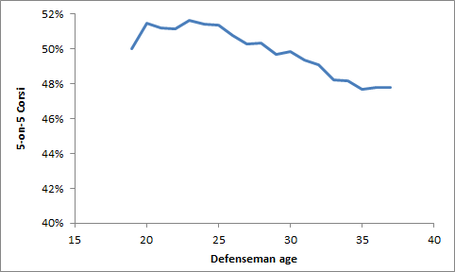 There is a widely-held perception that defensemen take longer to mature than forwards do, but it's not entirely clear that this is true. It is true that fewer defensemen are in the NHL at ages 19-20 (by a factor of about 50 percent), but the peak observed performance does not appear to be later.

There are a few ways of interpreting this:

Maybe conventional wisdom is wrong. It's possible that defensemen are ready to play at age 19-20, but because their failures often lead to goals against (which are more tangible than a forward's failed attempt to create a goal for), it takes longer for an organization to be ready to trust them. 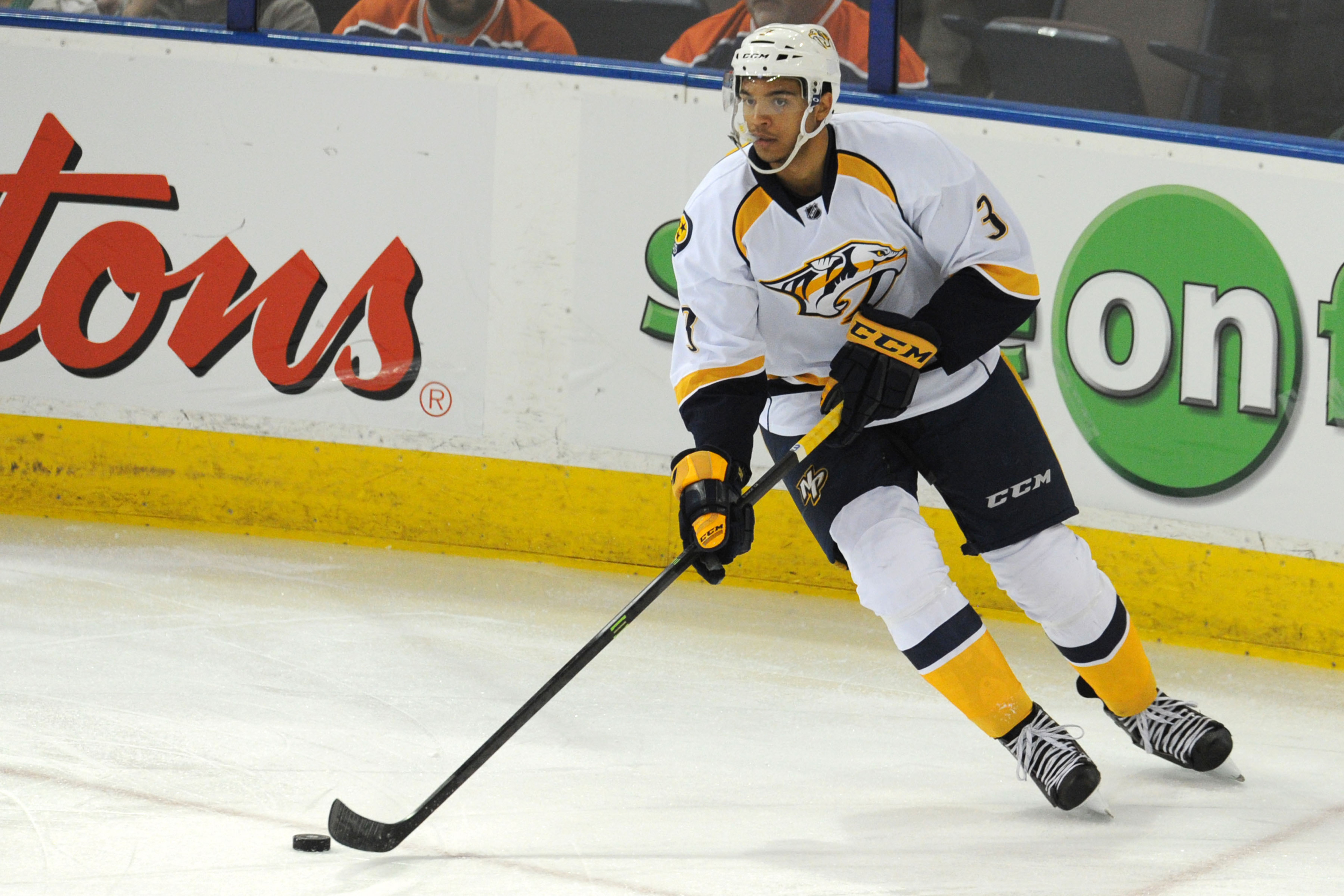 Maybe the smaller number of players reaching the NHL early creates a bias. Every body is different, and the players who reach the NHL at age 19 or 20 likely tend to be the players who develop earlier than average; it's possible that our curve would look different if we were able to include the age 19-20 seasons of late-bloomers.

Or maybe it relates to how usage changes. Corsi -- like all statistics -- depends to some degree on how a player is deployed. If he gets lots of offensive zone starts with strong teammates against weak opponents, this will lead to him having a higher Corsi and scoring more points. So if young guys tend to get easier minutes, that might make their peak appear to come at an earlier age than the peak of their actual capabilities.

Next time, we'll look at how usage evolves with age.

One thing I should note is that the Corsi aging curve for forwards is unusually sensitive to the analytical method. Adjusting for the impact of random fluctuations on survivorship normally changes just the slope of the curve, but in this particular case -- with a broad, bumpy peak -- it can actually change the peak location also.

So although the curve above should be reasonably accurate, given the unusual sensitivity here, I'll show what the curve would look like if my variance adjustment turns out to be way off the mark in either direction: 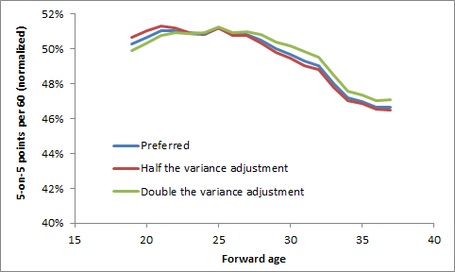