The Ducks could still claim the top seed out West, but everyone touts St. Louis as the big dog in the conference. Can Anaheim overcome the perception it isn't as strong?

Peeking at the Western Conference standings, there are still four teams that could claim the top seed for the playoffs.

While San Jose, Anaheim, and Colorado are all very strong teams, it seems all the talk surrounds the St. Louis Blues, who entered Wednesday's action holding down the top spot with three games left in the regular season.

Those big, bad, tough-as-nails Blues are slumping for sure, but key players like Alexander Steen, Vladimir Tarasenko, and David Backes are expected back for the postseason. The deadline deal that brought in Ryan Miller added even more strength to what was already one of the best defensive teams in the league.

The Blues deserve the hype, and it's Ken Hitchcock's job to make sure they live up to that hype and make a significant run in this tournament.

But what about the Ducks? Anaheim can still earn the top spot in the West, yet many learned hockey people have speculated that the Wild Card teams in the West would be better off facing Anaheim and not St. Louis in the opening round.

This is especially true with the Wild, who have already nabbed the top Wild Card position. Longtime NHL scribe Michael Russo is as sharp as any hockey mind you'll find on Earth, and his pregame blog before Tuesday's Boston-Minnesota matchup included the phrase "Let's Go Blues!"

He wasn't talking about Chelsea.

Russo knows the Wild must avoid St. Louis in the first round. It's not because no one can beat St. Louis. The Stars have done it twice, and get a chance to win the season series Friday in Dallas. It's not about the Blues being so good they can't be touched. It's about the Wild not matching up well against them, for whatever reason.

St. Louis' size, physicality, and structure have given the Wild fits all season. The last meeting ended 5-1 in St. Louis' favor, and it came one night after Minnesota was thumped at home by (gulp) Vancouver.

For weeks now, Russo has been trumpeting the matchup against Anaheim as being more favorable for Minnesota. The Wild played the Ducks pretty well this season, but it's more about the actual matchup than it is regular season results.

(That said, the Wild dominated Anaheim in the last meeting at Honda Center. It might have been Minnesota's most complete game of the season.)

Anaheim doesn't play that big, physical style. The Ducks are more of a skating group that relies on puck possession and strong-skating, puck-moving defensemen. They're a more explosive team, but they can be victimized by a team that plays strong defensively and keeps to a sound structure.

They're a more explosive team, but they can be victimized by a team that plays strong defensively and keeps to a sound structure.

Sounds like Minnesota. The Wild have permitted fewer than 26 shots on goal in nine straight games, allowing veteran Ilya Bryzgalov to get comfortable between the pipes now that rookie Darcy Kuemper is injured and out for an undetermined period of time. As the playoffs loom, the Wild look to be playing with more and more defensive structure.

The Ducks just don't look like a team deep enough to make a long run. Ryan Getzlaf and Corey Perry are wonderful players, but the two combine for 166 points, the exact total that the next four players on the team scoring chart combine for. They can be exposed as a thin team by anyone who can match that top line, cancel it out, and rely on its own depth to create puck possession and scoring chances.

While Anaheim has talented young blue-liners like Cam Fowler and Hampus Lindholm, Francois Beauchemin isn't the player he once was, and there just isn't a big-minutes guy in the group. Who goes on the ice to protect a one-goal lead in a playoff game?

And who is the goaltender they're trying to support?

Jonas Hiller has 50 starts and 29 wins to his credit, but young Frederik Andersen of Denmark has 19 wins and a superior save percentage. Hiller's last two starts before Wednesday, against Nashville and Edmonton, were awful. And it wasn't like Hiller faced strong offensive teams. He faced the Predators and Oilers.

Who starts in the postseason? No coach wants to deal with that.

If Bruce Boudreau -- who has done a wonderful job with this organization -- starts the veteran Hiller, and he falters, is it too late by the time a switch is made? And what if he starts the youngster and he falters? 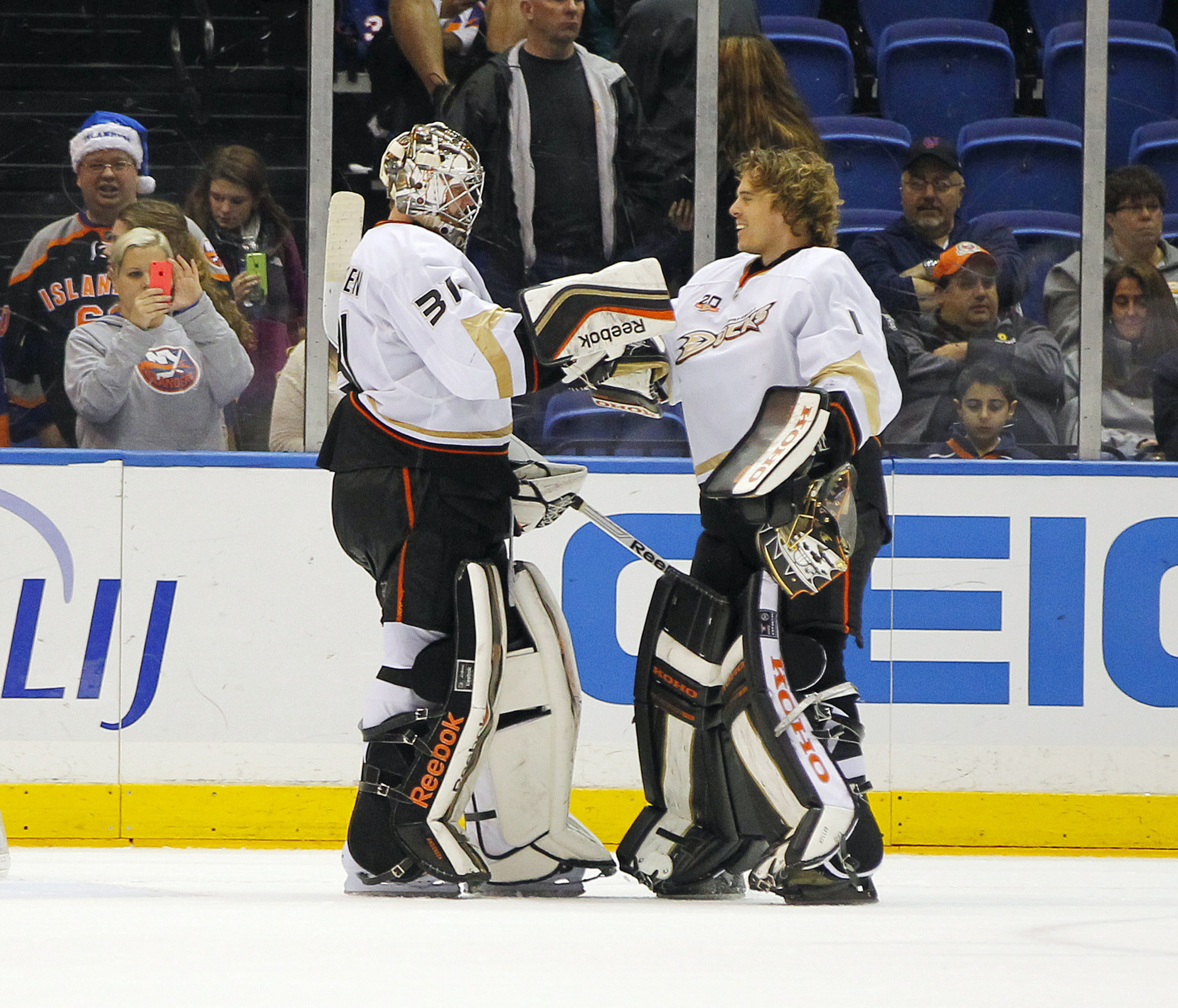 The Ducks goalie depth has been viewed as a strength all year. Could it prove to be problematic come playoff time? Photo credit: Andy Marlin-USA TODAY Sports

It's a messy situation, and one that isn't completely alleviated if Hiller plays well down the stretch. And it's a question mark that other top teams just don't have. St. Louis has Miller, Colorado has Semyon Varlamov, and San Jose boasts Antti Niemi in goal. No controversies there.

For Minnesota, specifically, the matchup with Anaheim is simply better. No disrespect, but the Ducks look like the most vulnerable of the top four in the West. No matter what happens, the West playoffs should be incredible. Even a team like Minnesota or Phoenix could be dangerous if the defensive play is as strong as it appears it could be. No one is safe, and all bets are off.