The Montreal Canadiens and Tampa Bay Lightning face off in the first round of the 2014 Stanley Cup Playoffs. Let's discuss.

One of the most surprising performances in the NHL this season was the way the Tampa Bay Lightning were able to maintain their playoff position through the middle part of the season without the services of Steven Stamkos.

A lot of credit goes to Martin St. Louis, Valtteri Filppula and their outstanding crop of young forwards for keeping the offense going. And then at the trade deadline something wild happened: they traded St. Louis to New York for Ryan Callahan, and then, to the surprise of many (including yours truly), Callahan went and outscored St. Louis over the remainder of the regular season. It's all part of a pretty impressive argument that Jon Cooper has put together for coach of the year honors.

Meanwhile, for the Canadiens, they seem to have the weight of an entire country on their shoulders as the only Canadian team to qualify for the Stanley Cup playoffs. 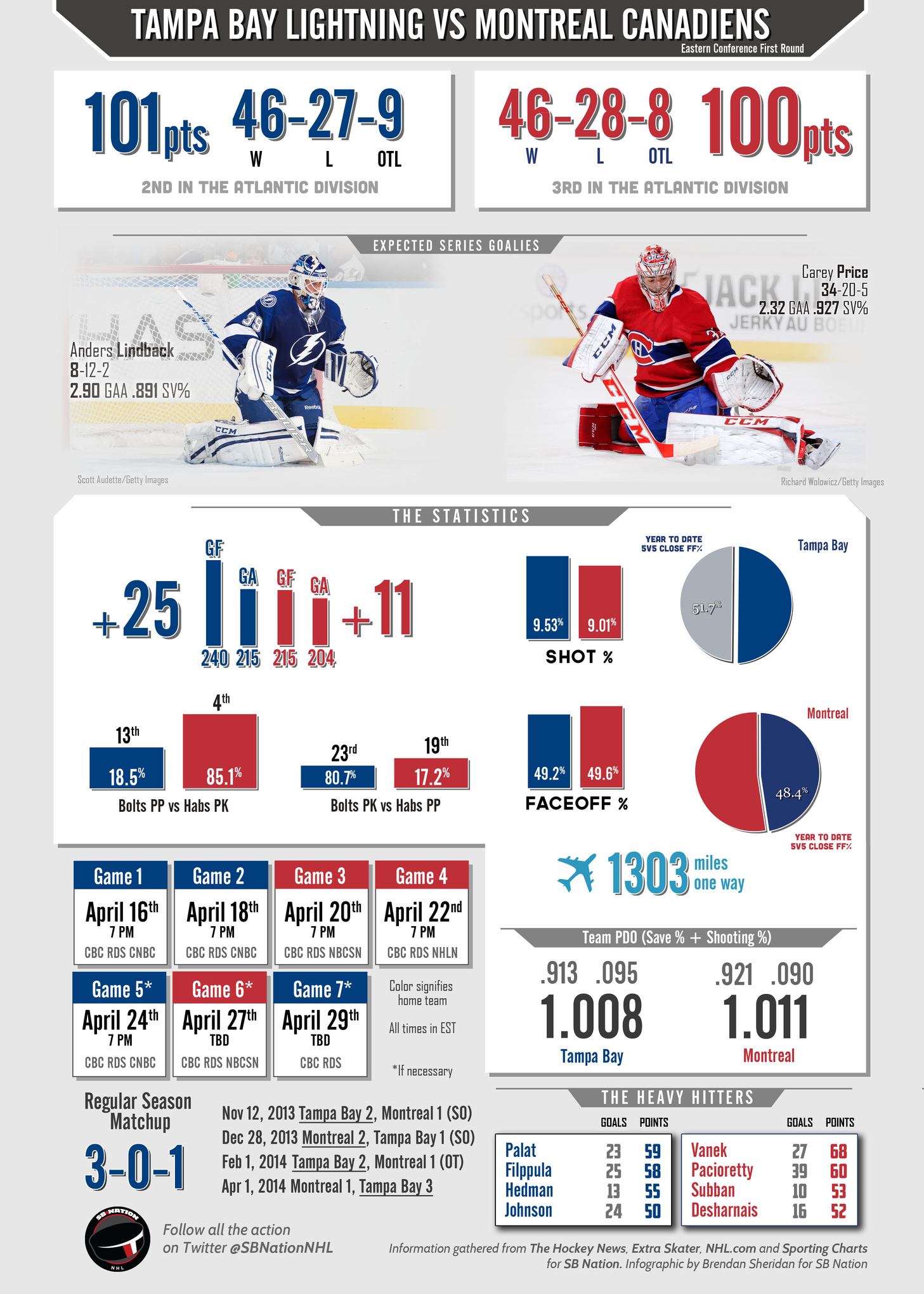 The Canadiens' offense starts and ends with Max Pacioretty. You don't often hear him mentioned among the NHL's best goal-scorers, but over the past three seasons only six players (Alex Ovechkin, Stamkos, Corey Perry, Phil Kessel, James Neal and Joe Pavelski) have scored more goals than Pacioretty's 87. His 39 this season (in just 73 games) were good enough for fourth in the league.

Once you get past Pacioretty, Tomas Plekanec is Montreal's shutdown center and plays some of the toughest minutes in the NHL, yet still came away with his sixth 20-goal season.

The biggest question for the Lightning coming into this series was one of health, and whether or not some of their top forwards like Valtteri Filppula and Ondrej Palat would be able to play. It seems that both should be ready for Game 1 of the series in Tampa Bay. Stamkos hasn't shown any signs of being slowed down by the leg injury that cost him most of the season and has come back scoring at the same pace he was before he went down.

The Lightning were able to maintain their playoff pace without him because of their impressive collection of young forwards, especially rookies Palat and Tyler Johnson.

The outlook on defense

The biggest problem for Montreal's defense appears to be one of player usage by coach Michel Therrien. Reigning Norris Trophy winner P.K. Subban seems to constantly be in the doghouse and sitting on the bench for extended periods of time, while Douglas Murray usually ends up playing between 15 and 17 minutes per game, which is 15 to 17 minutes too many. He became a huge liability for the Penguins in last year's playoffs, and it's hard to imagine this series against a fast, skilled Tampa Bay team going differently.

Andrei Markov stayed healthy for the second straight season and the 35-year-old proved that he can still get the job done offensively, with 43 points, including 23 on the power play in 81 games.

Sandwiched between John Tavares and Matt Duchene in the 2009 draft, it's sometimes easy to forget that Victor Hedman not only came out of that class, but that he has also turned into a fantastic player who eats up tough minutes. His defensive game has pretty much always been there, but this season his offense really took off as he finished with a career-best 55 points (13 goals, 42 assists) in 75 games. That point total was good enough for fifth-best in the league among defensemen.

The one thing that could really derail Tampa Bay's chances in this series is if Ben Bishop isn't ready to go. He missed the final week of the regular season after he was injured diving for a puck in a game against the Toronto Maple Leafs. Even though his play fell off a little in the second half, he was still one of the best goalies in the league this season and is a clear upgrade over backup Anders Lindback, who owned one of the worst save percentages in the NHL.

• The complete first round schedule
• See the bracket
• Our NHL playoff predictions
• Odds: Bruins, Blues favored to win Cup
• Our network of team blogs • Is Anaheim vulnerable?
• Wild card teams could upset
• Yes, Canada: You have to root for Montreal
• Video: the best first round matchups

With a .927 save percentage and being asked to face more than 31 shots per start, Carey Price should be one of the leading candidates for the Vezina Trophy this season. The question is whether or not he'll be able to maintain that into the postseason, something he hasn't really done in his career. His .905 playoff save percentage since 2008 is 29th out of 35 goalies to appear in at least 10 playoff games over that stretch. Given the way he played for Canada in the Olympics it's awfully hard to argue that he can't handle the big-game pressure, but Montreal is definitely going to need him to be better in this series than he has been in the past.

The No. 1 objective of any penalty kill going up against Tampa Bay: find Steven Stamkos and don't let him shoot. Seems simple, right? Especially when you know exactly where he is going to be. Well, it's not. His one-timer from inside the faceoff circle remains one of the most lethal shots in the league and the spot where he scores almost all of his power-play goals, and even though every team in the league knows it's coming Tampa Bay still finds ways to get him the puck.

The Canadiens, however, have one of the best penalty kill units in the league and went 17-for-19 against the Lightning this season. They completely Tampa Bay down until the last matchup of the season when it scored on two of its nine attempts.