Are NHL teams too conservative when they get a two-goal lead, and what impact is that having on the 2014 Stanley Cup Playoffs?

Share All sharing options for: NHL playoffs: Stop sitting on that 2-goal lead

There were three NHL playoff games on Wednesday night and each one of them saw a two-goal lead evaporate at some point in the game.

Two of the teams that were guilty of coughing up such a big lead (and in this NHL, where the average game has between 5-6 goals, a two-goal lead is big) ended up losing.

In Dallas, Anaheim raced out to a 2-0 first period lead without Ryan Getzlaf and Teemu Selanne, and then watched as the Stars scored the final four goals of the game to even the series at two games apiece.

In the Columbus-Pittsburgh series, the curse of the 3-1 lead continued (in this case it was actually 3-0 lead) and Marc-Andre Fleury's return to playoff form went on as scheduled, as the Penguins turned their early lead into a 4-3 overtime loss. Every game in that series has seen a team, at one point or another, hold a 3-1 lead and then go on to lose by the same final score every night.

The worst playoff goaltender in hockey

Chicago built a 2-0 lead in the second period and then allowed three consecutive St. Louis goals before re-tying it late in the third period, and then winning it on Patrick Kane's overtime goal.

This isn't just a one night thing.

This is something that's been happening a lot in these playoffs. Over the first 28 playoff games, a two-goal lead has been blown 11 times. Eight times the team that blew it went on to lose the game (Pittsburgh twice, Columbus twice, Anaheim once, Minnesota once, New York once, Los Angeles once).

Three times the team that blew it managed to still win (Montreal, St. Louis and Chicago all did it once).

Over the first 28 playoff games, a two-goal lead has been blown 11 times.

According to Extra Skater, playoff teams have held a two-or-more goal lead for more than 360 minutes of 5-on-5 play in these playoffs. During that time they've been outscored 16-10 and have managed to post a 44 percent Fenwick (unblocked shot attempts) rating.

This isn't unexpected. We know that when teams get up by a goal or two they tend to get outshot as they go into "protect" mode and the other team that is trailing is taking shots from all over the place in an effort to get back into the game. In the hockey analytics community, this is simply referred to as score effects.

Since the start of the 2007-08 season, as far back as we have Fenwick data, the league average Fenwick rating when up two goals is 44 percent, exactly what it is in these playoffs. Over that time only 15 teams have finished a full regular season and managed to "win" the shot attempt battle when ahead by two or more goals.

The teams on this table should not surprise you. All data via HockeyAnalysis.com.

There are a lot of really good teams on that list, including three of the most recent Stanley Cup champions.

But what's interesting is that before this season there were only 10 teams over a five-year stretch that managed to do it. Does the fact that five teams --  five of the best and most well-run teams in the league (Boston, Chicago, San Jose, St. Louis and Los Angeles)  -- did it this season alone indicate that maybe teams are starting to catch on that playing with the puck is the best way to hold a lead? After all, every shot attempt you give up is a chance for something bad to happen. Deflections happen, bodies get in the way, goalies misplay pucks. The only sure way to eliminate the chance for something like that to happen is to keep the puck for yourself.

As far as every other team in the league is concerned, why does this happen? Some teams just aren't very good and don't have the personnel to play that type of game. But there are a lot of good teams that fall into this trap and allow their opponents to take a trip to the shooting gallery when they're ahead (six of this year's 16 playoff teams were in the bottom half of the league in Fenwick percentage when up by two or more goals).

If a team is good enough to put itself in a position to go up by two or more goals, why does it suddenly feel the urge to stop doing what it was doing?

Is it a coaching tactic where they're afraid to be too aggressive and call off the dogs in what is hockey's version of a prevent defense? Almost as if they would rather lose because they don't want to make a mistake than because they got greedy.

Or are players, out of fear of being "that guy" that makes the crippling mistake that opens the flood gates extra cautious and taking fewer chances?

Edmonton Oilers coach Dallas Eakins addressed this from a coaches perspective in a refreshingly candid way after a September preseason game against the New York Rangers in which his team let up with a third period lead.

"It kills me," Eakins said. "It makes me crazy. I was getting ready to check myself in in the third period because we started to sit back and I don’t understand that.

"Why you would, after having great success for two periods by pushing the pace and limiting their time and space, why would suddenly give them time and space when the other was working for us? I feel the best way to defend a lead is to score a goal. That’s the way to do it. To sit back and give them chance after chance doesn’t make sense to me." 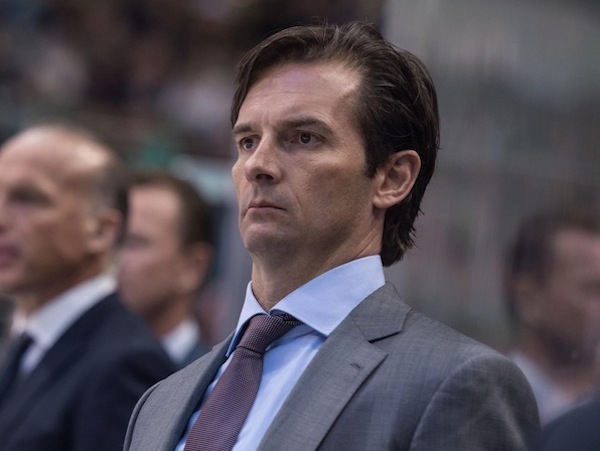 Earlier this month, after the Anaheim Ducks completed a wild comeback against the Winnipeg Jets, Justin Bourne, a former player, offered the players perspective at Backhand Shelf. It's a great read with some interesting insights, including the point that even though he never played for a coach that tactically changed their system because the team had a lead, they would tend to reward guys that played it safe and simply chipped the puck out of the zone.

A third cause, and the only thing that I believe coaches affect, stems from something like the rat food-reward experiments we used to do in my psychology classes. With a lead, coaches are less prone to use guys who "take risks," which seems to be a trait that goes hand-in-hand with "having talent." The last thing a coach wants is to see Nazem Kadri make a dangle inside his own blueline, turn the puck over, and give up a goal. What they do want, is Jay McClement to chip the puck out of the zone because, like fans, they’re less stressed out when the puck isn’t in their zone. So, it gets out, coach feels relief, sees who made the clear, and the rat has been rewarded. He wants more of that.

Whatever the reason, teams seem to be too quick to stop the pressure when they're ahead.

I've always thought the cliche that says "the two goal lead is the most dangerous lead in hockey" to be utter madness. No sane, rational person would ever seriously think that being up by two goals in a sport where the object is to score more goals than your opponent to be a bad thing.

And if it is a bad thing, you better be trying your best to make that two-goal lead a three-goal lead.