In Part 1 of a series on zone entry data, we break down the ability of defensemen to prevent their opponents from carrying the puck into the offensive end.

An important goal for analysts is to assess player value and project future performance. There are endlessly nuanced ways to tease apart a player's contributions -- he has good gap control, a solid first pass, is decent along the boards, struggles with big bodies in front of the net, has an average slapshot, and so forth.

But at the crudest level, it really boils down to this: how much does he help his team?

These days, tools like Corsi do a reasonably good job of showing us whether the team tends to control play when the player is on the ice. If they seem to do better when he is on the ice than off it, it's likely that he's doing something right.

But we still don't know for sure. Maybe he's playing with a great partner who drives play and carries the pairing. If we want to know what each player is actually doing, what credit or blame they deserve individually, we'll need metrics that reflect individual play rather than just the performance of the team.

Everyone recognizes that puck possession is important, and that individual contributions to puck possession are worth measuring. That's why NHL.com tracks plays like faceoff wins, hits, giveaways, and takeaways -- they're individual plays that can change possession. The NHL deserves a lot of credit for adding these statistics to the traditional box score; it's just unfortunate that they don't turn out to be all that meaningful.

There are some flaws in the NHL's stats that should have been obvious going in. For example, the person with the most giveaways on a team isn't going to be the schlub with no puck skills; since you have to have the puck to give it away, it's the skilled players who carry the puck a lot that end up charged with a lot of giveaways.

There are also some flaws that might have been tougher to predict without the data. It turns out that hit totals don't correlate with possession (if anything, there's a weak negative correlation because, again, you only get to record hits when the opponent has the puck).

So for a variety of reasons, the NHL's attempt to track individual contributions to puck possession haven't panned out. We'd like to have records of what individual players bring to the table; if the NHL's stats aren't the right metrics, then what are?

It turns out that neutral zone play is a huge factor in a team's shot differential (and by inference, puck possession). Even after we control for a bunch of factors -- odd-man rushes, dump-ins just to get a line change, the skill of the players in question -- it turns out that a carry-in generates more than twice as many shots, scoring chances, and goals as a dump-in.

Moreover, there is a huge spread in zone entry talent. High-end forwards carry the puck into the offensive zone on more than 70 percent of their entries, while the grinders are as low as 30 percent. Consistently gaining the blue line is one of the strongest individual contributions a player can make to driving possession.

But it can't be the only one. Surely, there are off-puck contributions worthy of note, right?

Before this year, we weren't directly measuring those contributions. Like with Corsi, we were left to infer individual defense and off-puck offensive play -- if the team gives up a lot of carry-ins with a certain defenseman on the ice, then we'd guess that he's doing something wrong.

This year, I asked one of the enthusiasts tracking zone entries (Jessica Schmidt, who tracks entries for the Philadelphia Flyers) to record some off-puck information too. Here's what we added:

With these pieces of data we can tease out a lot of details of off-puck play. I'll walk through the defensive stats in this article and look at puck retrieval in the next one.

The first question to ask when we look at a new stat is whether it's repeatable, whether the differences we see between players are likely just random fluctuations or indicate real differences that we should expect them to repeat going forwards. One easy way to assess this is to separate odd- and even-numbered games; if having the scores from odd-numbered games doesn't allow you to make a decent guess at how the players did in the even-numbered games, then the stat probably doesn't tell you much about the players. So let's take a look at how the odd and even numbered games correlate for these three stats for Flyers defensemen (through 70 games, minimum 35 games played): 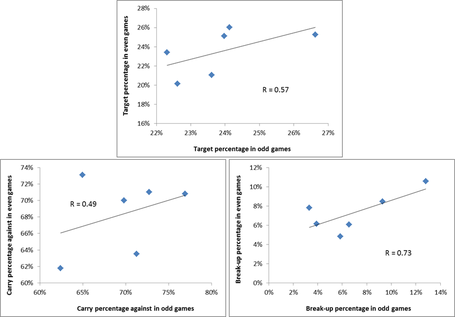 The more repeatable a stat is, the more its points will tend to cluster towards a line -- players with a low number in both samples end up in the bottom-left and players with a high number in both samples are in the top-right. Some of these metrics cluster more closely towards a line than others, and with only a handful of players it's hard to draw really strong conclusions. But, at least so far, all three stats look reasonably reliable, so let's look at what they say.

I pulled three statistics out of the data on who was guarding the opponents' entries.

The first thing you should ask when presented with a new statistic is how repeatable it is. All performances fluctuate to some degree, but these fluctuations affect some measures more than others. In this case, these stats all look reasonably reliable (see sidebar for details).

So with that out of the way, let's take a look at... how the Flyers' defensemen are doing this year by these numbers (through 70 games, at 5-on-5; players who played at least half of those games are shown in bold):

Braydon Coburn is clearly separated from the pack in all three metrics. He stands apart as the Flyers' best defenseman at preventing the opponents from gaining the blue line this year.

In fact, the gap might be even larger than these numbers suggest -- Coburn takes on the toughest competition, which means he will generally see more of the opponents who are most likely to carry the puck in. We can control for this to some extent by looking at the numbers for pairs of defensemen when they were on the ice together:

The table is sorted in order of how many minutes each pairing played together. The last few pairings represent just 100-150 minutes of play, and should consequently be taken with a grain of salt. Still, we can start to sort things out in terms of ability to prevent the opponents' zone entries:

All of that is reasonably consistent with the season totals in the first table, which suggests that differences of usage might not have a major impact on our results. This conclusion is further supported to some extent by looking at the individual players' numbers -- Grossmann's carry and break-up rates don't change much when he moves up from the second pairing with Streit to the top pairing with Coburn, for example.

Coburn doesn't have quite the all-around game that the truly elite defensemen have, but he's establishing himself as a solid first-pairing defensive defenseman.

There are a growing number of people around the league tracking things like zone entries and exits, which will allow us to tease apart individual contributions like this in an increasingly sophisticated manner.