How do the Pittsburgh Penguins fix what's broken?

This postseason exit could lead to changes for the Pittsburgh Penguins. But what changes need to be made?

Share All sharing options for: How do the Pittsburgh Penguins fix what's broken?

From a big picture standpoint, it did not matter whether the Pittsburgh Penguins won or lost Game 7 of their series against the New York Rangers.

A win would have put them in the Eastern Conference Final for the fourth time in seven years and, for the short-term, would have hid some of the warts that have developed in the organization over the past couple of years. It would have been temporary satisfaction until what would have been a likely repeat of last year's loss to the Boston Bruins.

Instead, their 2-1 loss to the Rangers, which included another sensational Game 7 performance from Henrik Lundqvist, was the fifth straight year they were eliminated in the postseason by a lower-seeded team and the second time over that stretch they watched a 3-1 series lead evaporate.

It's expected that the loss will bring sweeping changes within the organization. What those changes will end up being remain to be seen. Before the Penguins' decision-makers sit down and figure out how to fix their problems (and make no mistake, there are problems) they must figure out what it is they have to fix.

There is always a danger for teams to overreact in these situations, especially when the bar is so high. Expectations are good. If you're going into the season with a Stanley Cup or bust mentality, it probably means you're doing something right.

Sometimes, though, things aren't going to bounce your way. Sometimes the other team is simply better. Sometimes the breaks, bounces and injuries are going to work against you. It's hard to get everything to fall in your favor over an 82-game regular season and two-month playoff run. That's why the NHL hasn't had a repeat champion in nearly two decades and why, to this point, only one team in the salary cap era — the Chicago Blackhawks — has managed to win more than one championship.

What you can't do is go too far in the opposite direction. You can't do what the Washington Capitals did after the 2010 season and try to make players into something they're not; you can't turn a high-flying, skillful team into a passive, trapping team. You can go too far because of what happened in a seven-game stretch, and it can set your team back several years.

With this Penguins team, it doesn't always come down to one or two bounces working against them. It's not just about what happened in one particular playoff game or one playoff series. There are flaws here, and while coach Dan Bylsma will likely be the first one to fall on the sword, he's not the only — or perhaps even the biggest — issue. 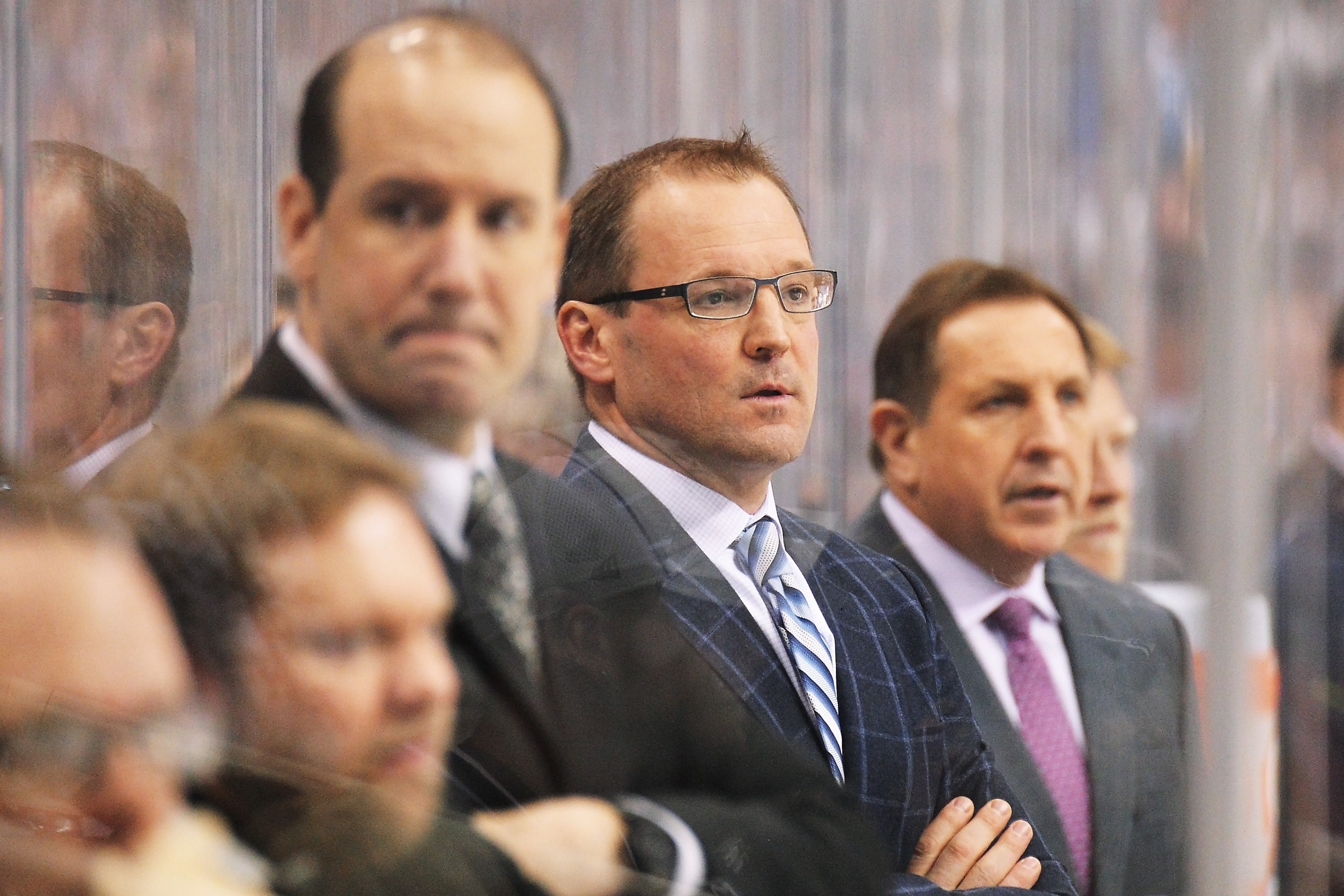 He's not without blame, of course. Bylsma went into Game 7 without scoring depth, forced to dress guys like Craig Adams and Joe Vitale while playing Brian Gibbons on the first line. He compounded that by inserting Tanner Glass into the lineup, sacrificing even more skill for toughness — and then played Glass just six minutes in a game his team lost 2-1.

It's a waste of a roster spot — and that's not only a bad look, it's the type of thing a coach needs to be grilled for.

Along with that, you also have to ask why those are the options he has to work with.

There are a lot of theories about this team and why they haven't returned to the Stanley Cup Final since winning it all back in 2009. They're not good enough or committed enough defensively. They're not as tough as they used to be or hard enough to play against.

But the thing that gets lost about that 2009 team is just how skilled and deep they were. Their third line had Jordan Staal, Matt Cooke and Tyler Kennedy on it. Their fourth line had Miroslav Satan (a former 40-goal scorer in the NHL), Pascal Dupuis (when healthy, a first-liner on this year's Penguins team) and Adams, with the occasional game from Petr Sykora thrown in.

This team, again, had Tanner Glass skating on the third line in a Game 7. That's a problem. That's a big problem.

And this is where the Penguins have suffered their biggest failing. 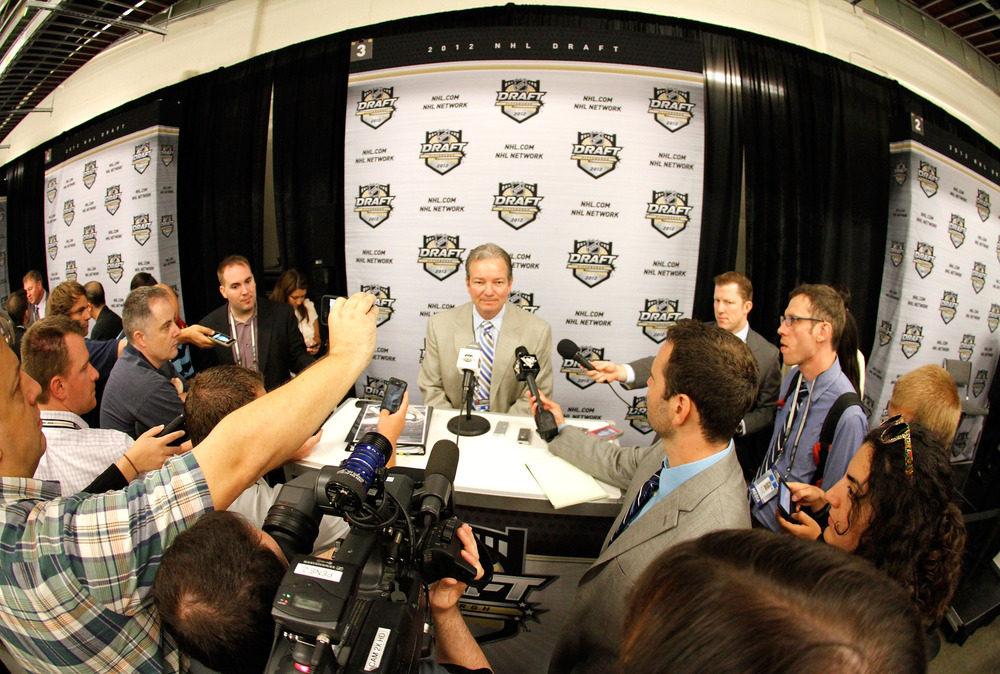 In a salary cap league, your depth is going to eventually get broken apart, especially when you have so much money committed to superstar players. It's unavoidable, and it's imperative that your farm system is able to produce cheap, young talent and your front office is able to bring in quality depth on the cheap.

The Chicago Blackhawks went through that a couple of years ago when they lost Dustin Byfuglien, Andrew Ladd and Kris Versteeg. Eventually, guys like Brandon Saad, Andrew Shaw, Bryan Bickell and Nick Leddy came up and replaced them, complementing their superstars. Then they won the Cup again in 2013 and are back in the Western Conference Final in 2014.

The Penguins have not done this, mainly because there seems to be a major player development problem throughout the entire organization — from the scouting, to the drafting, to the actual development of the players once they get into the system. Nobody seems to get better in the minors or develop as planned.

Twilight of an Enforcer

A player fights to stay in the game he loves

Since Ray Shero has been the Penguins' general manager going back to 2006, the team has drafted and developed two above average NHL players. One of them, Jordan Staal, the No. 2 overall pick in 2006, no longer plays for the team. The other, Olli Maatta, is a 19-year-old defenseman that burst onto the scene this season and looks to be one of the team's building blocks going forward.

And that's it. That's not good enough.

The inability to develop their own talent internally has resulted in a yearly routine of trading draft picks and future assets for more depth. Then they have no draft picks to restock the cupboard and the process continues to repeat itself. It's a vicious cycle.

Let's face it, this is a pretty damning statistic.

Absurd statistic: no Penguins draft pick since 2007 has scored more than 15 goals in his career with the team.

They've spent years drafting young defensemen instead of forwards and have little to show for it. They traded former first-round pick Joe Morrow for two months of Brenden Morrow (no relation). They seem to stay awake at night thinking of reasons to not play Simon Despres, and when their defense could have used another puck-moving presence on the blue line, he spent the postseason in the American Hockey League. The one first-round pick they did use on a forward in recent years, Beau Bennett, spent Game 7 against the Rangers sitting in the press box watching Tanner Glass skate in his spot.

In a league where teams, including Stanley Cup winners, are getting younger and faster and relying on their own cheap talent, the Penguins have spent the past two years bringing in and investing in players on the wrong side of 30.

They acquired Morrow, Jarome Iginla and Douglas Murray at last year's trade deadline. They gave 35-year-old Rob Scuderi a four-year, $13 million contract this past summer, a move that was four years too late and is probably only going to get worse. They re-signed Chris Kunitz and Dupuis to long-term contracts that will take them into their mid-30s and what will surely be a decline in production and perhaps, given their style of play, their durability.

Look at it this way: Last year's Blackhawks team had only three players over the age of 32 appear in at least five playoff games. The 2012 Kings had only two. This season, the Penguins had five such players. Last year they amazingly had 10. For next season the Penguins, as of this moment, have five roster spots and nearly $17 million in salary cap space devoted to players on the wrong side of 32 (Kunitz, Dupuis, Scuderi, Martin, Adams).

And, again, there is little help coming from the farm system. This is where the front office needs to be held accountable, or at least face the same scrutiny that the head coach gets.

Will there be trades?

When it comes to change, there will probably calls to do something major to shake up the core of the roster.

Every offseason this usually seems to focus on Evgeni Malkin. Since signing his long-term contract extension, defenseman Kris Letang has also been the focal point of trade speculation. But this is the type of thing the Penguins can't do. They can't do something silly like trade Malkin, or Crosby, or Letang, or Maatta. Those guys are rare.

James Neal, on the other hand, might be a moveable asset if they want to make a bold move and "shake things up," trying to bring in more young talent. As a 40-goal scorer he's obviously the type of player that does not grow on trees, but his game has at times disappeared when he's not centered by Malkin.

On a team that at times loses its way in the discipline department, Neal is usually driving the bus in that regard. If you're a player that needs a franchise center to be useful and spends way too much time sitting in the penalty box because you can't control your stick or resist the urge to take a run at our opponent, that's a problem.

The focus needs to be on giving Malkin and Crosby the type of supporting cast that can step up whenever they're having an off night or stuck in a slump, which happens to even the best of players. All season, when neither Crosby or Malkin was on the ice, the Penguins played like one of the worst teams in the league because of their lack of depth.

And while the superstars will always take the brunt of the blame in the postseason (especially when, in Crosby's case, the offensive numbers just were not there), this isn't the NBA where one or two superstars punches you an automatic ticket to the Conference Finals or Final. When there's only four or five goals in the average NHL game, the goals aren't always going to be there for them, and when things dry up, you need somebody else that can make up for it.

That's how the Blackhawks were able to survive Jonathan Toews going through two different nine-game goal droughts in last year's playoffs and still go on to win the Stanley Cup. The supporting cast was there.

As we saw with the Penguins, both in the regular season and the playoffs, when Crosby or Malkin aren't doing it ... nobody is going to do it.

They don't need to focus on getting tougher, or grittier, or more physical.

They need to focus on catching up with teams like Chicago, loading up with more talent and skill, and developing the supporting cast that their stars no longer have.