In 2006, when he took over as the head coach of the Vancouver Canucks, Alain Vigneault had a vision. This was a different NHL than when he had his first coaching stint in Montreal, a post he held from 1997-01. This was post-2005 NHL lockout; hockey in a league trying to emphasize goal scoring and entertainment value.

And slowly, Vigneault's vision in Vancouver came together. Each year, his Canucks climbed higher and higher in possession metrics like Corsi and Fenwick, according to Hockey Analysis. Finally, in 2011, his finely tuned Vancouver machine fought its way into the Stanley Cup Final with a high-octane, up-tempo style of play. They fell one win shy of lifting the Cup.

When Vigneault was chosen as the Rangers new head coach this past offseason, he was supposed to bring that same style to New York, and change hockey culture on Broadway. He was supposed to fix the offensive problems that befell the John Tortorella era Rangers, a team built from the net out that always fizzled out in the postseason due to a lack of goal scoring.

More on the Rangers

More on the Rangers

Some of Tortorella's most prominent criticisms as a coach of the Rangers have turned into cornerstones of Vigneault's new-age Blueshirts. Chris Kreider was constantly in the doghouse, unable to sniff the lineup at times due to his inability to play in both zones. Carl Hagelin stunk on the power play. Tortorella rolled three lines most nights, giving the likes of Mike Rupp and Stu Bickel scarce minutes, but a sweater and a spot in the lineup nonetheless.

Vigneault brought with him the same philosophy to New York: He made it his goal to turn the Rangers into an a quicker team, one that got out in transition, rushed defensemen up ice, and yes, rolled all four lines. That last part is pretty key, as it's difficult to ask a group of nine forwards to play at a quicker pace for 60 minutes. It's where the Canucks may have fallen a bit short of Vigneault's master plan.

But these Rangers -- while it took them the better part of the first season with their new bench boss -- seem to be figuring out Vigneault's scheme. Currently playing against the Canadiens in the Eastern Conference Final, it couldn't have come at a better time.

Speed through the neutral zone

If Tortorella was the anti-Kreider, Vigneault may be the pastor of the newly found Church of Kreider. The 23-year-old's rare blend of size and speed makes him a perfect fit for his new coach's system.

On Kreider's goal in Game 1 of the Eastern Conference Finals, he beat all five Canadiens down the ice before putting one past Carey Price.

When the Rangers win the puck behind the net, Kreider is in the left circle. He knows he needs to go north-south, and makes a move up ice immediately. 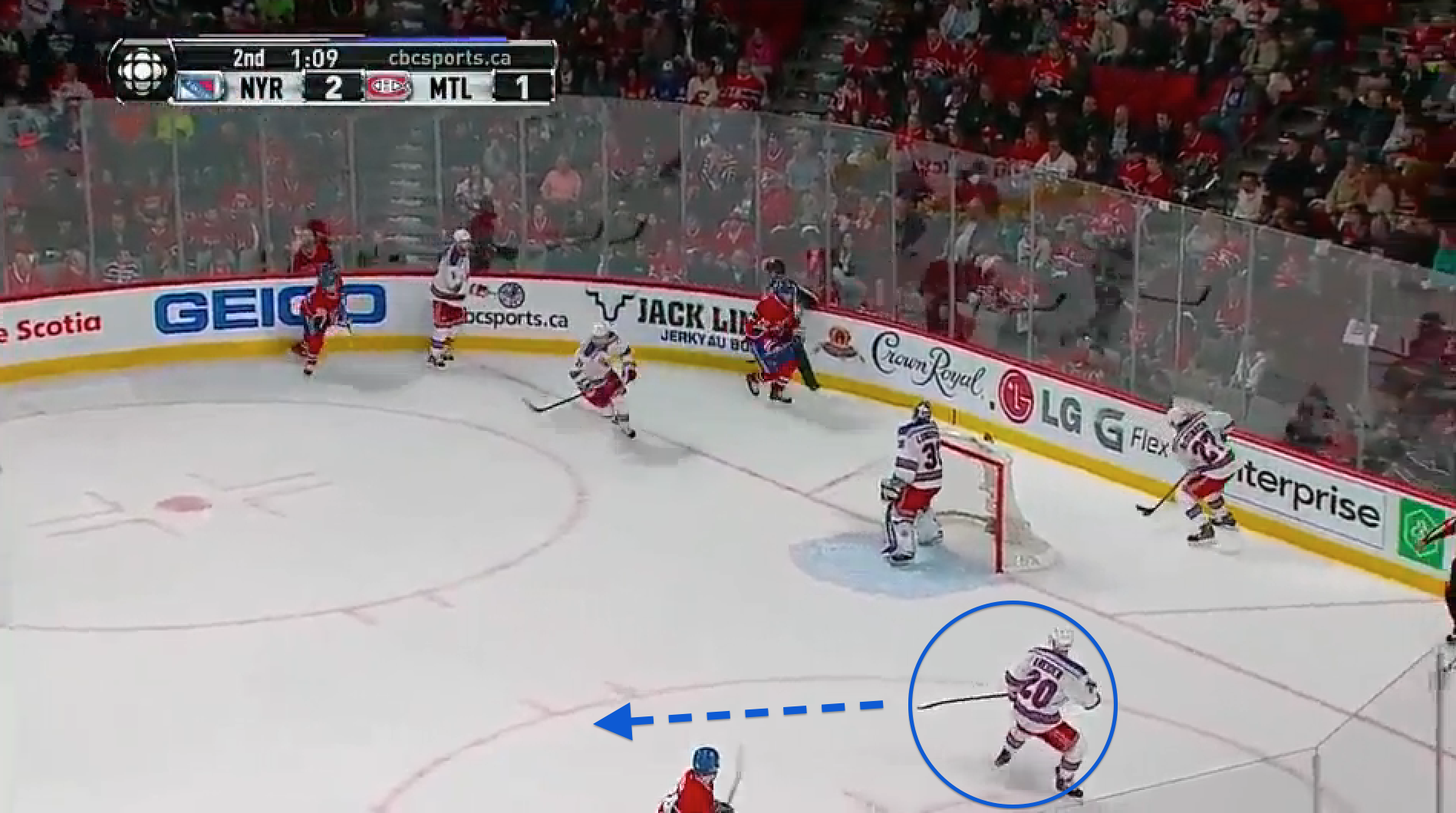 When McDonagh fires his outlet pass, Kreider has already begun to pick up speed, but is only ahead of one Canadien. Another crucial element of this play is to keep the puck moving, and McDonagh does so well by hitting Rick Nash through a seam in the neutral zone. 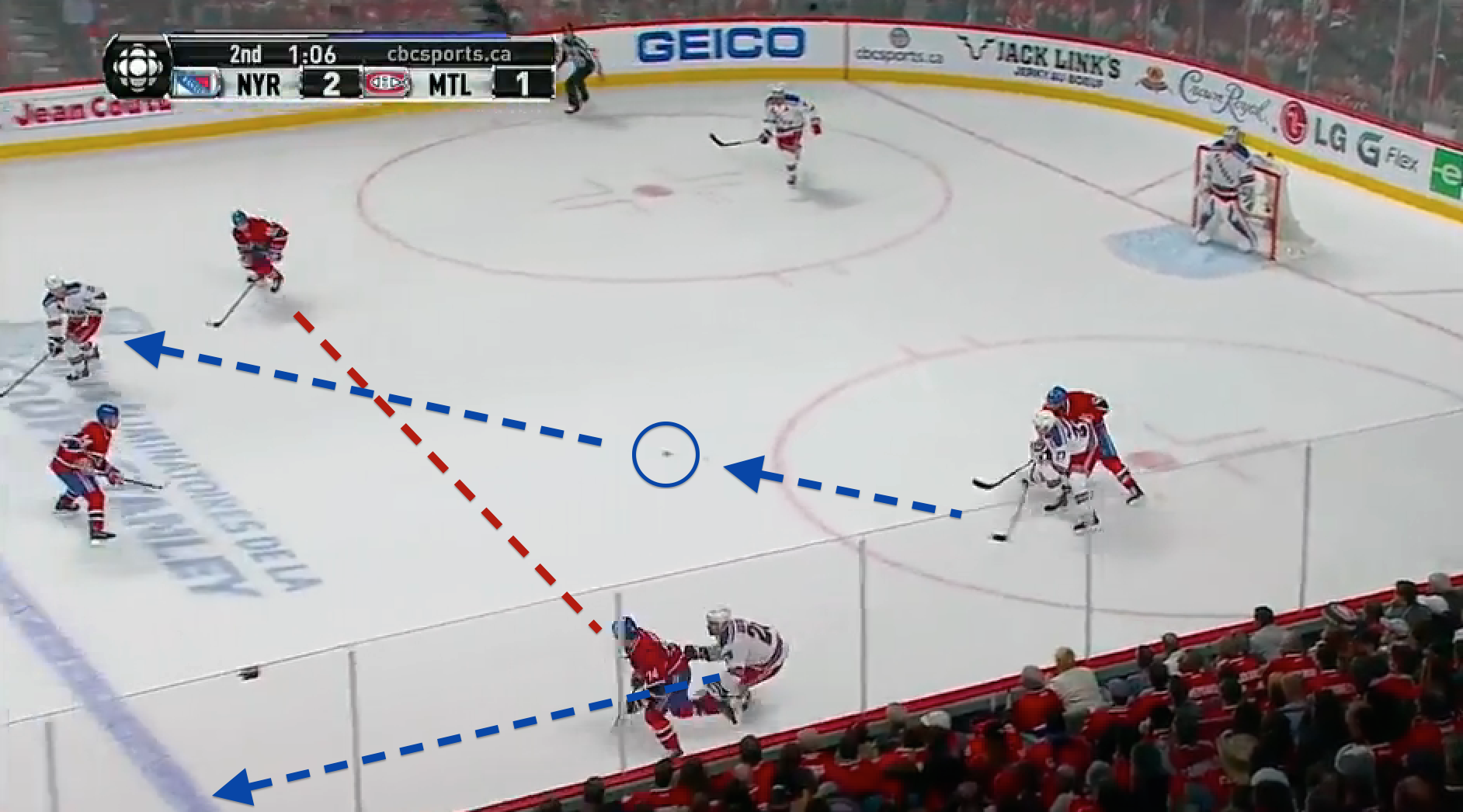 And before Montreal can get back, Kreider is past the defense, taking a cross-ice feed, and is in all alone on Price. 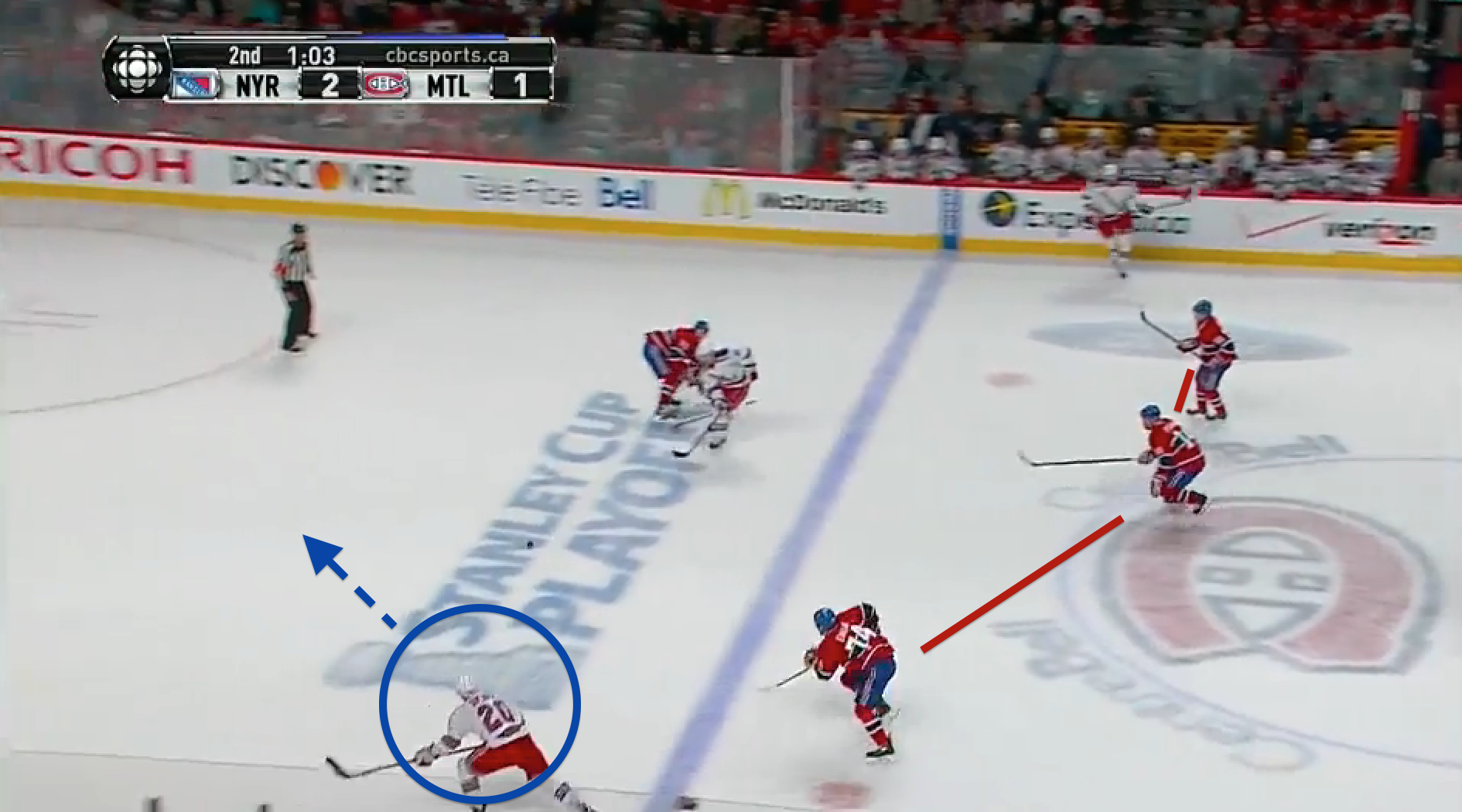 On this Hagelin goal during Round 2 against Pittsburgh, it's how the Rangers choose to attack the Penguins -- right through the heart of the neutral zone -- that leads to the tally.

Not only does this play get off to a pedestrian looking start, but with two Rangers skaters back in their own zone, there's no reason to think it's going to lead to a quick counter. 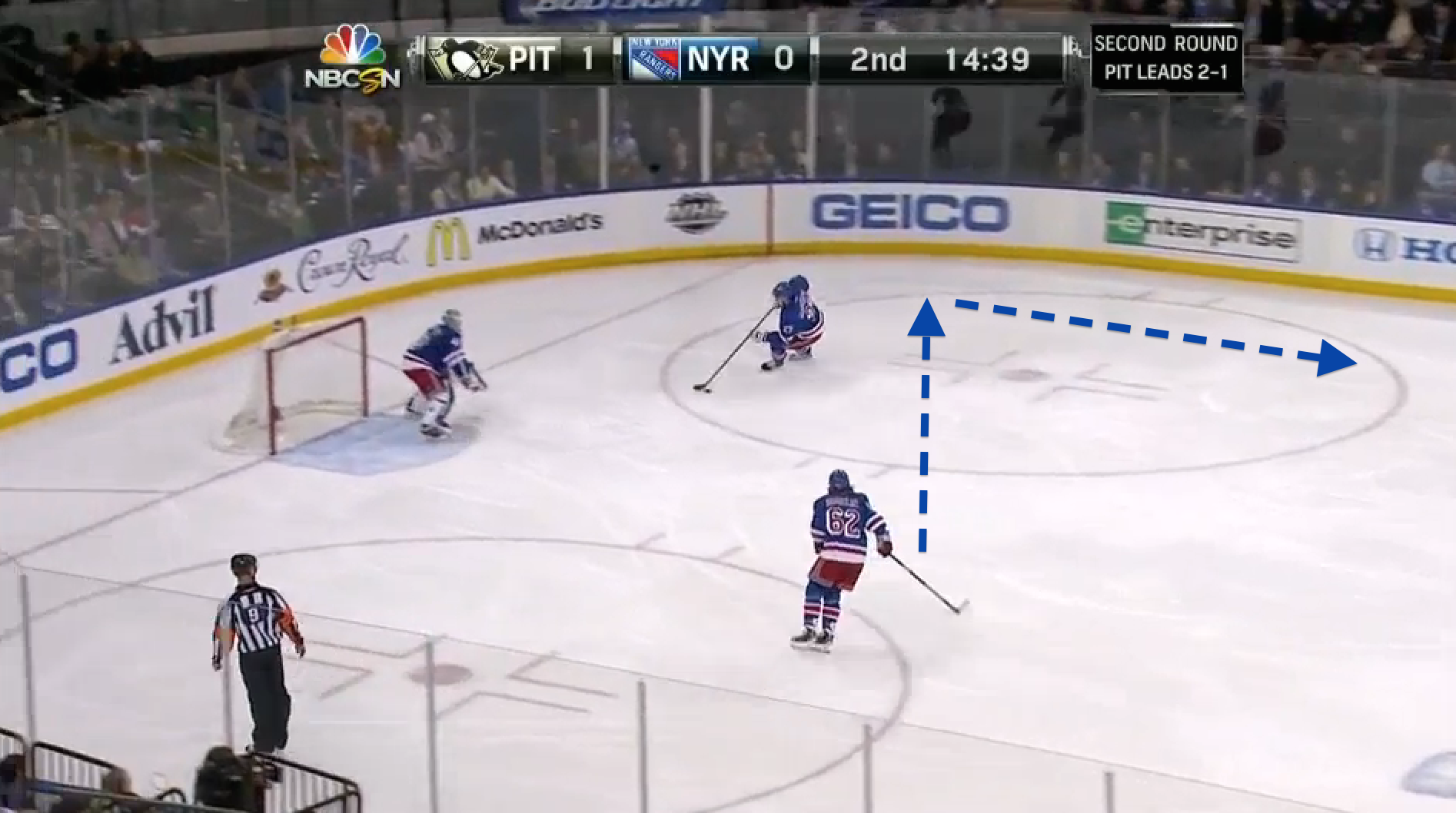 With both McDonagh and Hagelin's heads up, they identify a major hole in the neutral zone -- one Hagelin can exploit with his speed, and one McDonagh can skate toward to make an outlet pass. 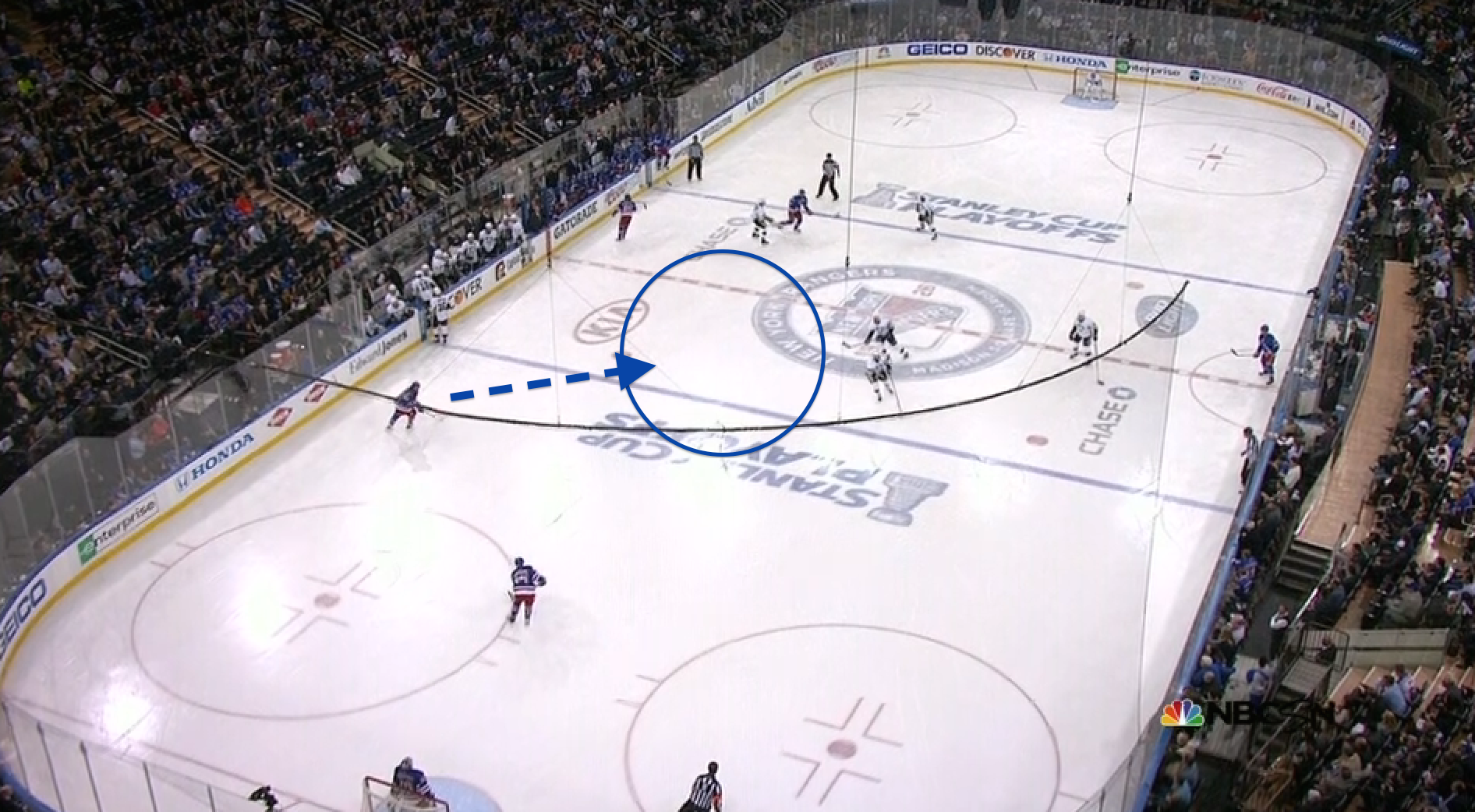 Hagelin takes this pass in stride, and is past three Penguins skaters at the red line. With his momentum, gap discipline is important, and the defense needs to force him left or right to have any chance of making a play. 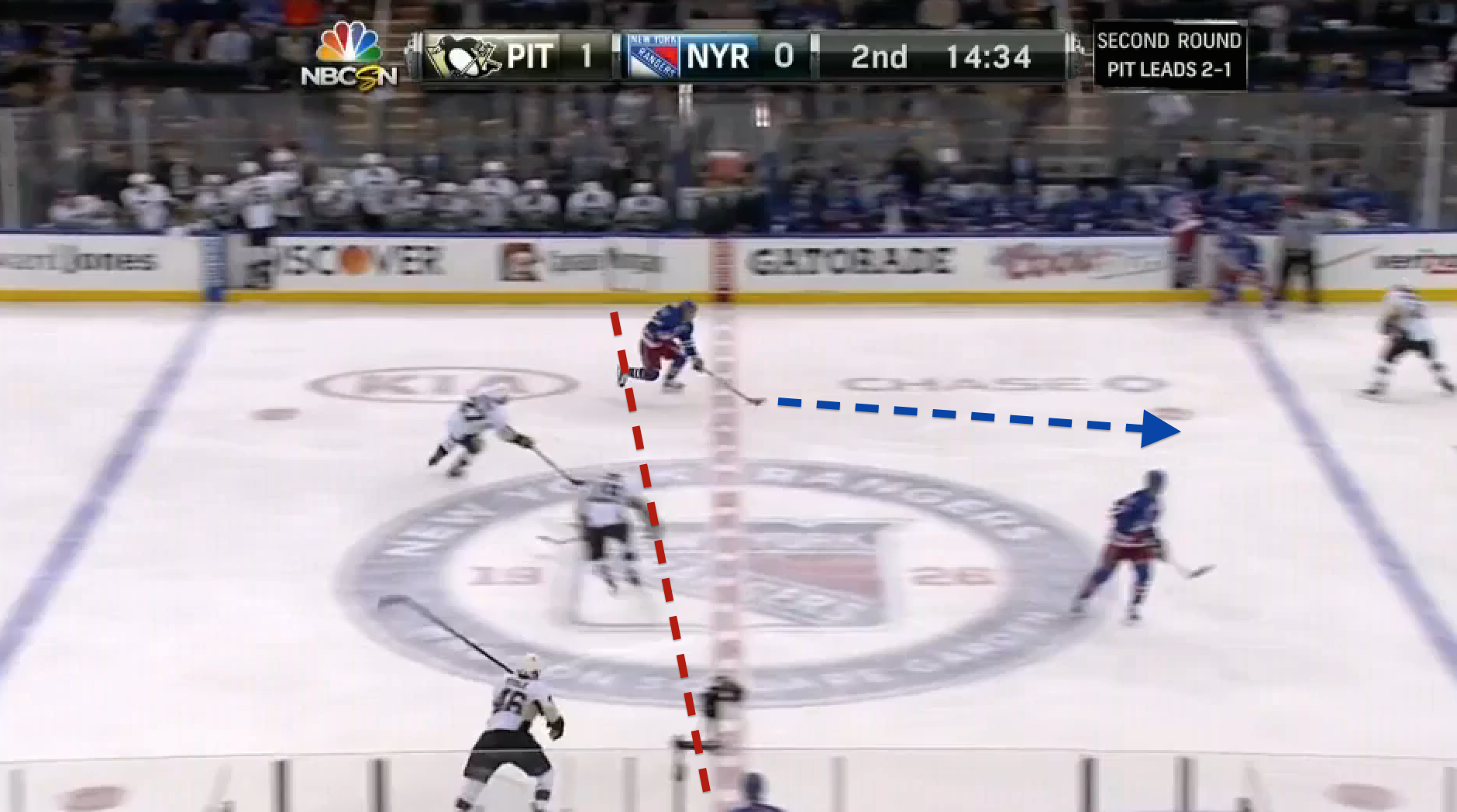 But because of how quickly the Rangers were able to counter, and how linear a path this up-ice transition takes, Hagelin busts past the blue line down to the dots, where he's able to beat Fleury. With how quickly he's skating, it's near-impossible for either Penguins defenseman to close the gap and make a play. 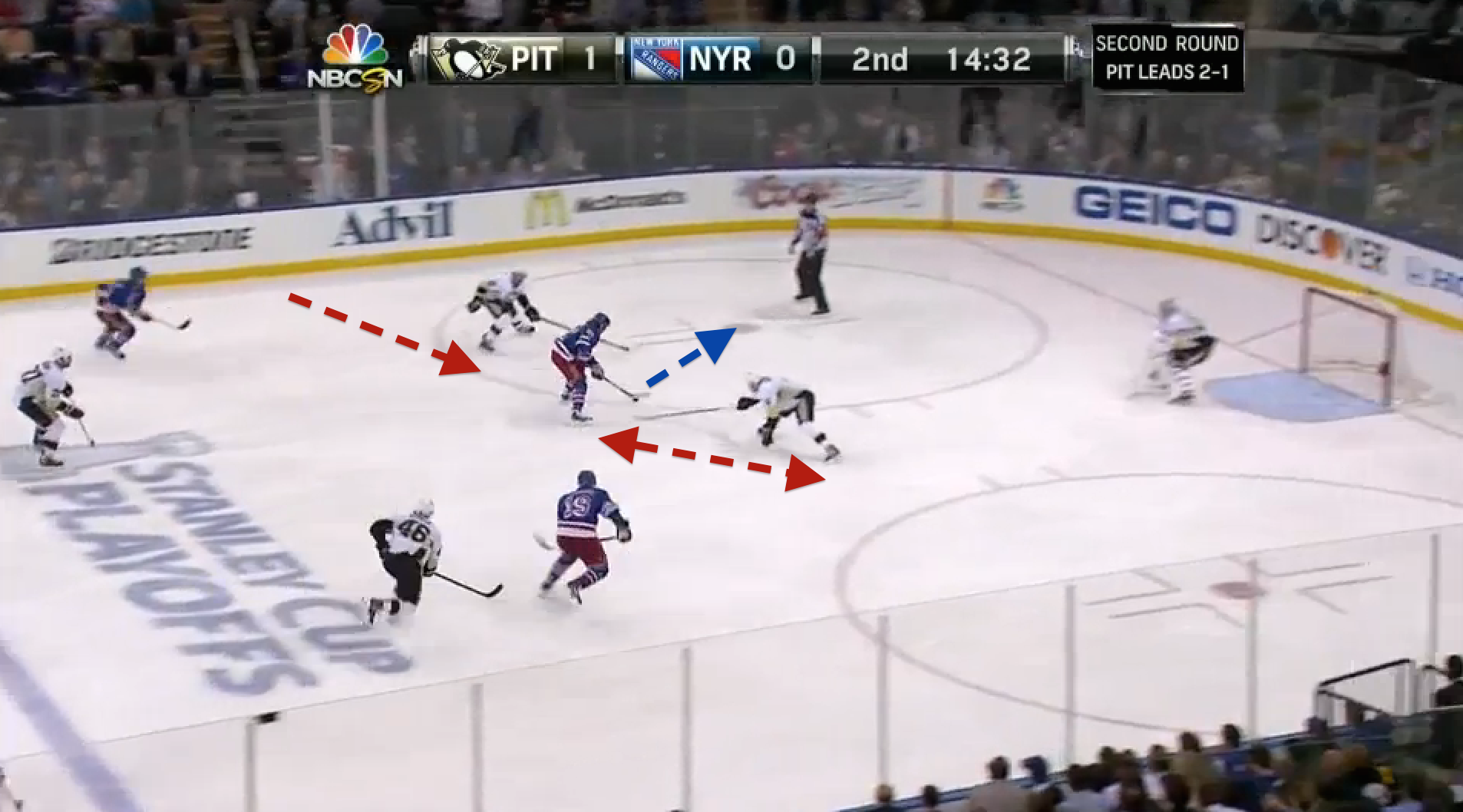 In his first three seasons as a professional, a full 169 NHL games, Ryan McDonagh scored 12 goals. In 77 games under Vigneault this season, McDonagh tallied 14. The blossoming defenseman always had offensive talent, but with a mandate to get more involved up the ice, and given a system to do so in, McDonagh has thrived.

On the Rangers second goal on Saturday against Montreal, McDonagh makes an aggressive play to help the Rangers maintain possession in the zone before helping to finish off the goal.

With Benoit Pouliot coming off the wall with the puck, McDonagh will pinch down from his point spot to accept a pass. 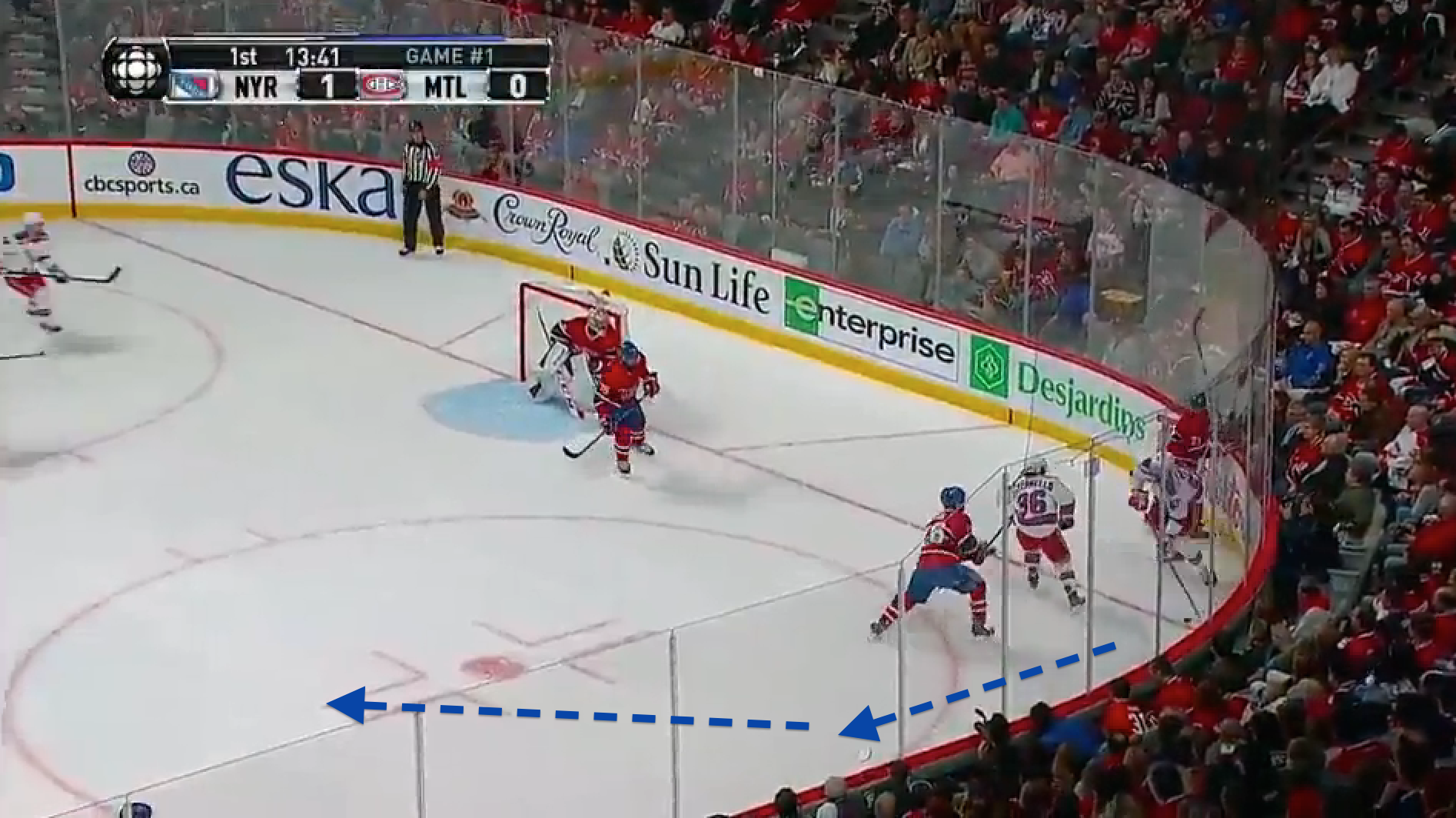 When McDonagh takes the pass, there's no shooting lane. Knowing he'll create an odd-man situation for Montreal by coughing up the puck, he skates into the space and creates a new lane. 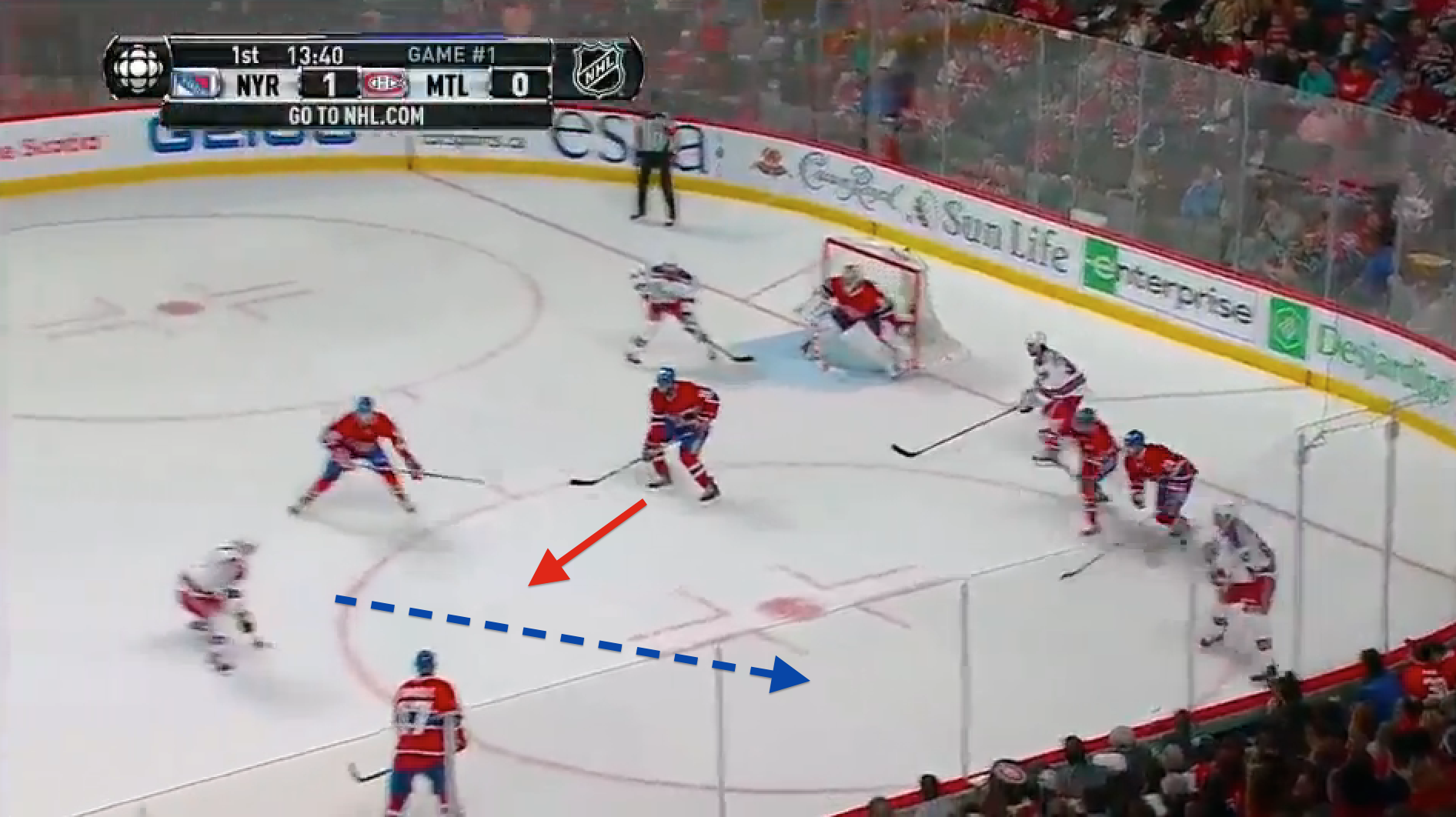 Pouliot will work the puck back down to the goal line, and McDonagh will go right to the front of the net, creating a 2-on-2 down low. 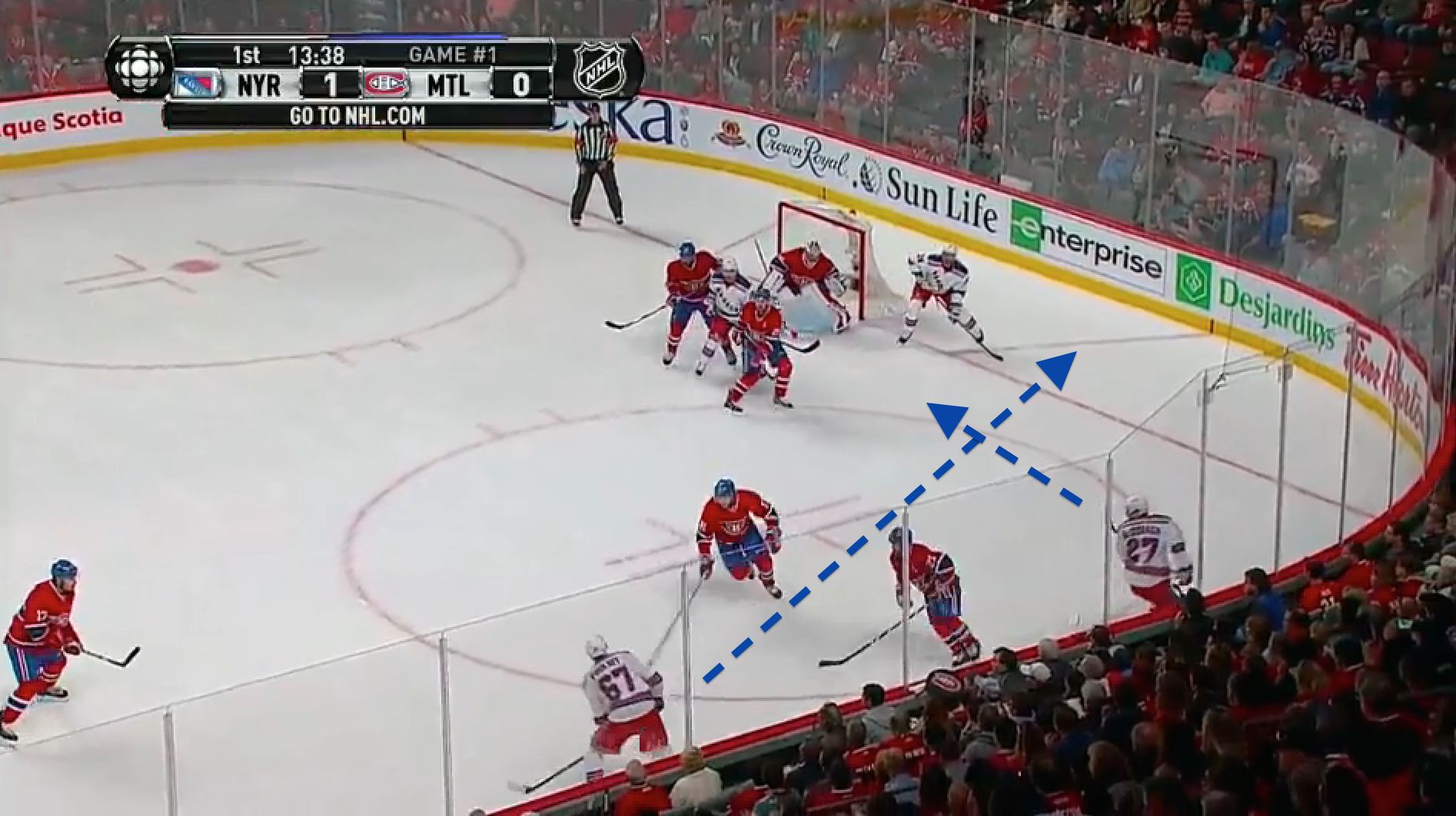 By crashing the net, McDonagh frees up space for Mats Zuccarello, and in turn, creates the goal. 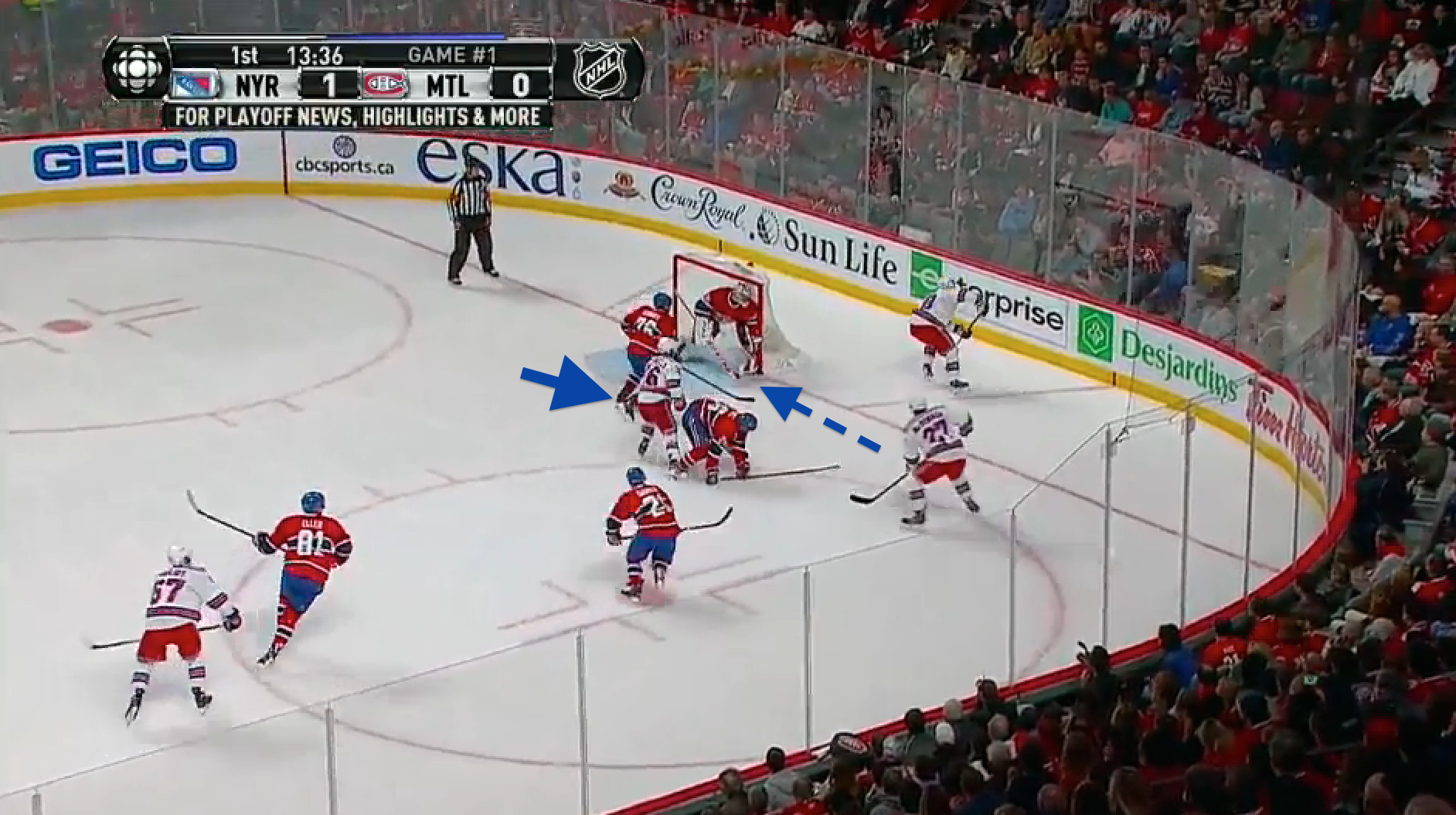 10 months ago, there was no telling if Vigneault would work out in New York. Some made Vigneault out to be a square peg trying to fit in a round hole. That a defense-oriented team couldn't simply be taught offense, and, voila, be cured of its ineptitude in that area.

But this Rangers team is deeper than the Vancouver team that lost to the Bruins in the Cup. Looking at the players who were getting bottom-minutes for that Canucks team, and you come up with names like Raffi Torres, Tanner Glass and Victor Oreskovich. Vigneault is now leaning on the likes of Dominic Moore, Brian Boyle, and Derek Dorsett, a trio that kills penalties, played key minutes against Sidney Crosby in Round 2, and even contributes on the scoreboard.

It's the same vision he drew up in Vancouver, remastered to a Broadway tune.