We always knew he was good. But maybe now everybody will realize P.K. Subban is a superstar.

The exception --  the times that Montreal has created its best opportunities and has been able to swing back at the Bruins -- is whenever P.K. Subban is on the ice.

Subban is winning the fight.

The Montreal Canadiens are in the driver's seat, while the Minnesota Wild earned their first victory in the second round.

After their 4-2 Game 3 win on Tuesday, the Canadiens own a 2-1 lead in the series and are one third period collapse away from being in complete control. Offensively, Subban has been at the center of it all.

He added to his playoff leading point total for defensemen on Tuesday with his third consecutive two-point game, assisting on Tomas Plekanec's first period goal and then flying out of the penalty box and beating Tuukka Rask with a slick move on a clean breakaway, one of the many defensive breakdowns the Bruins had during the game.

For Subban, the early numbers this postseason are pretty staggering.

Just consider that he's been on the ice for 16 of Montreal's 27 goals, the second highest total for any player in the playoffs (Los Angeles' Anze Kopitar has been on for 18 of his teams goals), and has recorded a point on 11 of them.

He already has five games with at least two points this postseason, including each of the first three games against Boston. According to the database at Hockey-Reference (which only has single game information as far back as 1987) that has only happened 24 times for a defensemen in the playoffs, and only six times since 2005-06.

And he's done it while playing in just seven games so far.

But it's not just the point totals or the flashy plays, like his breakaway goal in Game 3 or his double overtime winner in Game 1. It's about being able to skate the puck out of danger, or make the breakout pass out of the defensive zone, or the ability to gain the offensive zone.

Sometimes you have to take a look at what's happening for a team when a player is not around to realize how much of an impact player he really is. Without Subban on the ice in this series, Montreal has been getting stomped all over by the Bruins: only 35 percent of the even-strength shot attempts, compared to 48 percent with him. The Habs haven't been able to generate any kind of offense without Subban either: they've scored two even-strength goals in 88 minutes without Subban on the ice, compared to four with him in only 70 minutes. 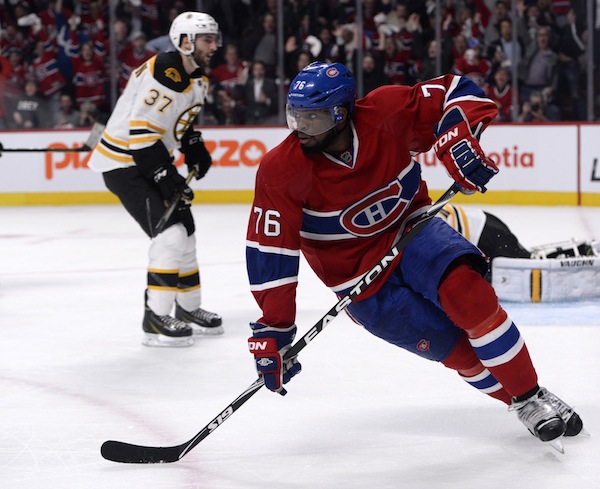 Maybe this series, and this postseason performance, will be the moment in his career that we look at and say, yes, that was the moment Subban really became a superstar in the NHL. It was the moment we recognized what a difference-maker he is on the ice and stopped looking for reasons to complain about his performance or style of play.

It's not that he hasn't been recognized as a great player before this moment.

He did, after all, win the Norris Trophy just last season as the NHL's best all-around defenseman, and you don't take home a piece of hardware like that without getting a great deal of attention and recognition for what you're doing. He has always been the type of player that has every possible tool and skill that should make him one of the most marketable and visible players in the league, both on and off the ice.

He brings you out of your seat on it. He's always been engaging off it.

But there always seemed to be something that somebody didn't like.

Even this season, the year after he won the Norris Trophy, he seemed to constantly find himself in coach Michel Therrien's doghouse, at times buried under some bizarre usage or spending long stretches of games glued to the bench because of a giveaway or a penalty earlier in the game even though he was clearly the best defenseman on the team and the guy could make a difference every time he stepped on the ice.

He's always been considered to be too much of a risk-taker, a conversation that once again popped up around the Olympics when his roster spot seemed to be up for debate.

Subban has been on the ice for 16 of Montreal's 27 goals, the second highest total for any player in the playoffs and has recorded a point on 11 of them.

But these are things that are more an NHL culture problem where the highly skilled guys (and this is especially true when it comes to defensemen) that do take chances tend to get a much shorter leash than the "stay-at-home" guys that don't have the skill to try and make any sort of a play. As I wrote earlier this season, it's almost as if teams would rather lose because they're not talented enough than because a skilled player made a mistake while trying to make a play.

Are there times when it needs to be dialed back? Of course. You don't want to be trying a spin-o-rama move at the blue late in the third period when you're protecting a one-goal lead. Will there be mistakes? Definitely. But when you have that rare ability, and the combination of skill and confidence to go for it, the rewards are usually going to outweigh the risks.

We shouldn't be trying to change the way guys like Subban play, we should embrace it. It's that skill that keeps bringing us back, and it's what gives their teams the best chances to win.

Right now for Montreal against Boston, he might be their only chance.