Young defenseman Dougie Hamilton is playing a huge role on the Bruins blueline, and he's thriving under the pressure.

About 15 minutes into Tuesday's Game 3 contest between the Bruins and Canadiens, Boston defenseman Dougie Hamilton made the ill-advised decision to double-team Lars Eller near center ice just as P.K. Subban rushed out of the penalty box. Subban, being the superstar that he is, converted on the ensuing breakaway to give the Habs a 2-0 lead, one it would not relinquish.

This miscue brought a lot of negative attention Hamilton's way, which is unfortunate because he's been playing extremely well of late -- the aforementioned blunder notwithstanding. And though not many outside of New England have noticed, Hamilton has raised his game considerably under the bright lights of the playoffs and has been one of the league's most valuable defenders through the first two rounds.

It's rare to see a d-man Hamilton's age earn a full-time job in the NHL; it's even rarer to see one be so effective. But the 20-year-old is indeed a unique talent, and his swift maturation has been instrumental to Boston's recent success.

"Defending is so important in the playoffs, and I think that's an area that Dougie's really improved, and he will continue to improve," Bruins general manager Peter Chiarelli told ESPN.com. "But he's just getting stronger as a man, as a young man, he's getting more confident with his body and with his strength.

"His skating has improved. But for me, the biggest thing is his defending and his strength on the puck, and it's gotten so much better. It still has to get better, because I project him to be a top defenseman, so he's on the right track."

Chiarelli has good reason to believe Hamilton can turn into a top defenseman, but an argument can be made that the 2011 first round pick is already there.

In 64 regular season games, Hamilton posted a relative Corsi of plus-3.6 percent during 5v5 action. In simple terms, that means that the Bruins shot differential while Hamilton was on the ice was 3.6 percent better than when he was off of it. To fully appreciate that number, we have to take into account several factors. First, we have to look at just how good of a possession team the Bruins are: Boston finished 2013-14 top five in the NHL in nearly every version of Corsi and Fenwick, so to be better in that regard than your team's average is an achievement worth noting.

Additionally, Hamilton wasn't given many easy minutes by head coach Claude Julien; rather, he faced the second toughest competition (as measured by opponents' time on ice) among Boston D-men, behind only Zdeno Chara.

Then there's his offense. Hamilton racked up 22 points (7 G, 18 A) in 2013-14, all while playing a responsible brand of hockey. Part of what separates him from the vast majority of players his age is he understands when the time is right to join the rush and when he should sit back. That mental strength has been key in allowing him to contribute so much at both ends of the ice.

This evidence alone should have gotten Hamilton ample praise months ago, and yet he remains a relatively under-appreciated commodity.

The playoffs should change that, though. Now that he's playing on national television every night, people have begun to notice how much Hamilton brings to the table.

Extra Skater's player usage chart does a good job illustrating how valuable Hamilton has been thus far in the postseason. As visualized below, Hamilton is starting the majority of his shifts that begin with face-offs in Boston's end of the ice, and is taking on stiff competition in the process.

Furthermore, the blue shade on his bubble show indicate his 5v5 possession numbers are strong -- 58.6 CF%, to be exact. 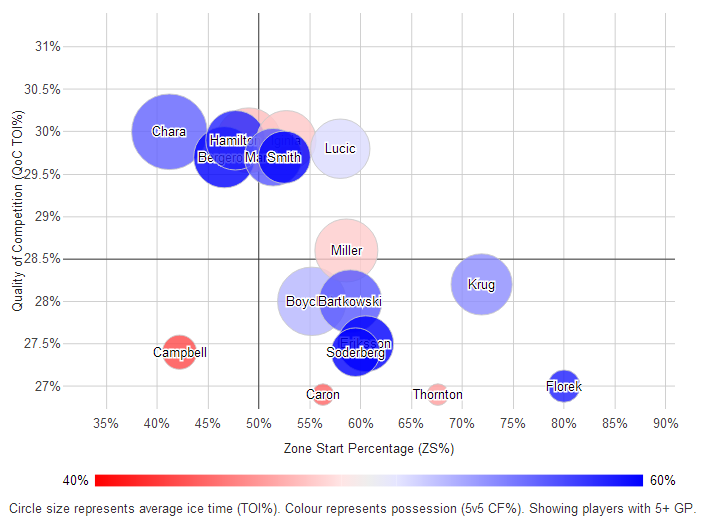 It takes a special defenseman to post those kinds of numbers under those circumstances, especially in May. Not bad for a kid who can't (legally) drink in the United States.

"You can see his confidence just going up-and-up-and-up," Boston forward Jarome Iginla said of Hamilton. "He's playing against other teams' top players and he's doing a great job for us."

Not bad for a kid who can't (legally) drink in the United States.

Thursday's 1-0 overtime Game 4 win was one of Hamilton's best games to date. During 5v5 play he was on the ice for 33 of Boston's shot attempts and only 13 shot attempts against. Eight of those attempts came off Hamilton's stick, more than any other Bruin.

He and Chara effectively shut down Montreal's line of Thomas Vanek, Tomas Plekanec and Michael Bournival, which combined for just seven shots on goal.

Hamilton didn't register a point in that contest, but his offensive output has certainly improved since the playoffs began. Through nine games he has six points (two goals, four assists), more than every Bruin not named Patrice Bergeron, Milan Lucic or Torey Krug.

His first goal, which came in the opening round against Detroit, proved to be a game-winner, which gave Boston a 2-1 lead in the series after dropping Game 1.

Of course, skating alongside Chara has helped Hamilton's cause. A lot. But Julien wouldn't put the kid in that position if he wasn't deserving. Right now, there's no reason to believe that Hamilton should be unseated from that role.

Though Hamilton may not skate on Boston's top pairing once Dennis Seidenberg returns from injury, the experience of playing with the best d-man in the world will be invaluable throughout his career.

And if his development continues on the right path, it may not be long before Hamilton evolves from a mentee to a mentor.

All statistics obtained via ExtraSkater.com.