It has been a series of bounces, and the New York Rangers have been on the wrong side of just about every one of them. The city's Stanley Cup dream is wilting away as a result.

Share All sharing options for: New York's Stanley Cup dream is dying by the hands of Lady Luck

NEW YORK -- A typical five block walk in Midtown Manhattan can be best described as a winding, hellish maze. People try to sell you stuff at every turn, or they just flat out ask you for your stuff. You can't walk in a straight line for more than ten consecutive steps without an interruption, be it some sort of scaffolding, a phone booth that hasn't actually had a phone on it in 10 years, or another human in your way. Intersections are somehow areas where pedestrians and drivers have little to zero regard for one another, enough to scare even experienced city dwellers. The occasional smell of pizza is the only redeeming quality.

For at least a few hours on Monday, though, that same five block walk was a little different. Not fundamentally different, because New York very rarely changes on a fundamental level. But it was different, at least in the area surrounding Madison Square Garden. It felt sort of like Hockey Mecca, with thousands of blue-clad people, hundreds of media and the attention of a city all facing one round building that sits along 7th Avenue.

I think they want us to call this place "Rangerstown," and as laughable as it is to call a city this size "Rangerstown" or "Yankeestown" or whatever slogan the marketing people come up with, it actually did feel pretty apt in the hours leading up to Game 3 on Monday. 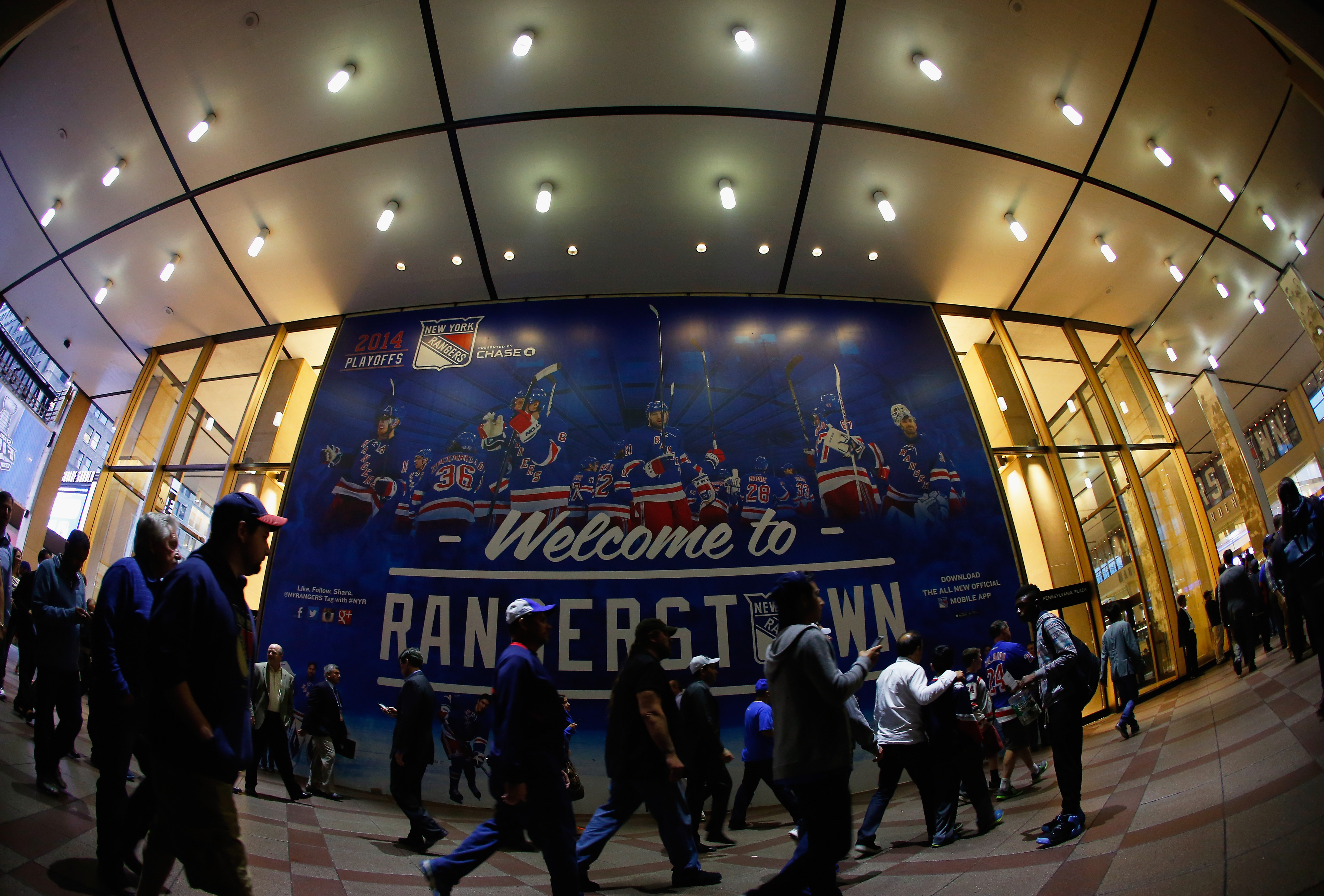 There were Kings fans and Rangers fans gathering in front of the building and inside Penn Station underneath it, ribbing one another and hoisting fake aluminum foil Stanley Cups. There were little kids in their youth-sized Rick Nash jerseys walking hand in hand with their moms and dads. Maybe they weren't even going to the game, but when your team is playing in its home rink in the Stanley Cup Final for the first time in 20 years, you bring your kids down just to see the pre-game spectacle.

There were celebrities. So many celebrities -- Bryan Cranston, Robert DeNiro, Louis C.K, Susan Sarandon. It's a long list that might somehow rival the one that we saw in Los Angeles for the first two games of the Final. There were double decker buses of Rangers fans driving around MSG -- it seemed like they were just doing circles -- singing an a capella version of the NYR goal song. Over and over and over again. It was stuck in my head before I even got in the building.

Unfortunately for these Rangers fans, and for the sporting hopes of the largest city in North America, that was the only time they'd hear that goal song Monday.

***
Fast forward to Tuesday morning, hours after Game 3. Here are the Rangers-related headlines in the New York Post:

You get the idea. The Rangers and their fans entered their home building down 0-2 in the Stanley Cup Final on Monday, but hopeful after two tough losses on the road that could have gone either way. Hopeful that they had the best goaltender in the world in Henrik Lundqvist, and a raucous home crowd, and that the bounces would finally go their way. They felt like this:

Then the absolute opposite happened. Jonathan Quick stood on his damn head, putting in a performance reminiscent of his 2012 run to the Stanley Cup and the Conn Smythe Trophy, and unlike what we've seen for most of the 2014 playoffs. The Kings' skaters blocked 20 shots ... and Lundqvist only blocked 12.

New York had plenty of chances, especially during a roughly eight- or nine-minute stretch in the second period in which they dominated the run of play and peppered Quick and the Kings with chance after chance after chance. Even though they never held a lead, it felt at times like their game to lose.

But Quick simply ripped their hearts out.

At the other end of the ice, the Kings only put 15 shots on goal -- compared to the Rangers' total of 32 -- but they made the most of those limited chances.

Jeff Carter silenced the MSG crowd, and it never seemed to get the energy back. Fans realized quickly in the second period that the Kings goaltender was stealing this one, and despite dropping $1,000 or more per ticket for Game 3, they just couldn't muster the energy to get rowdy again. I'd imagine spending that much money makes one sad even faster.

Two more unfortunate bounces beat Lundqvist, one credited to Jake Muzzin on the power play and one to Mike Richards in the third period, and it became pretty clear that the Rangers just weren't going to beat Quick four times.

More than any other Stanley Cup Final in recent memory, this series has been one of bounces. It has been much closer than the 3-0 series lead the Kings currently hold indicates. The Rangers probably played their best game in Game 3, yet they never held a lead and their arena felt like a mausoleum by the third period.

"At some point, you are going to need some puck luck and we don’t have any right now," Lundqvist said after Game 3. "It feels like they have all of it. We always talk about how you have to earn that puck luck, but I think we are working really hard and doing a lot of good things but when they score goals like that when it feels like we are right there and doing the right things, obviously it’s mentally challenging to try to overcome that first goal."

Everything is very, very close -- except for the shots that are actually going in the dang net. That's the type of thing that happens in a short playoff series, and it doesn't matter if the Rangers objectively have a better offensive team, or if they objectively have the better goaltender. The Kings are getting the bounces, as evidenced by two OT winners in Games 1 and 2. That, and one dominant performance out of their goaltender in Game 3, are the differences in the series.

The Kings have won three straight hockey games, and from the outside looking in, it seems like they are absolutely dominating the Rangers as a result. It doesn't look good for New York, but as they try to fight back from 0-3 down, at least they have Lundqvist, who despite the last three games is still the best goalie in the game.

As Quick proved in Game 3, a dominant goaltending performance can counter anything. It's pretty much the only thing the Rangers can lean on, and the only real thing that can stem the flow of Kings bounce after Kings bounce that has thus far decided this series.

I overheard a sad conversation between two Rangers fans in the 400-level bathroom late in the third period of Game 3:

"Fuck, man. I'm not comin' back for Game 4 so I gotta listen to that Devils piece of shit Doc Emrick on Wednesday, and they're gonna fuckin' lose. It's like God damn torture. Maybe I just won't watch."

"You're lucky bro. I went to both games in L.A. and brought back nothin' to show for it except credit card debt and an angry wife."

They both sighed, looked into the sink, looked blankly up at the mirror, shook their hands dry, and walked away.

The only thing missing from Lundqvist's résumé is a Stanley Cup, and his first shot at it is going as poorly as it could possibly go.

The crowd that shows up at Madison Square Garden for Game 4 on Wednesday will not be nearly as excited as they were before Game 3. They'll be subdued, and the spectacle of the Stanley Cup Final will have worn off in "Rangerstown." The double decker buses might not be as packed, and parents might not bring their kids down to the arena just for the experience of being near the action. Nobody wants to breathe in impending doom.

But the Kings have been in this boat before. They went up 3-0 on the New Jersey Devils in 2012 before dropping two straight, forcing a Game 6. The Kings have lost three straight games twice in these 2014 playoffs, as well. That's not to say the Rangers will push back or even win a game in this Final, but it does show that it's possible.

If the Rangers can somehow get back to MSG for a Game 6, maybe the spectacle and the hope of a Stanley Cup can return. For now, Lady Luck has killed that dream in New York City.